It looks at me dozens of times every day with that "you need to play with me" look!!  He also could use a good haircut.  He's always a hot mess since Mom has to do the cutting.  He freaks out at the sight of a groomer from a bad experience as a baby puppy. 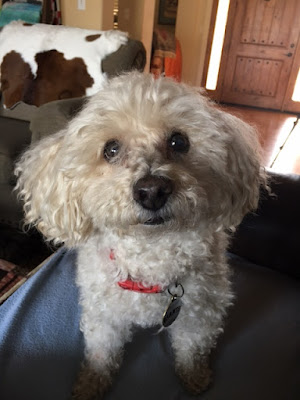 So here's today's Guess-the-State embroidery.  I was completely fooled until I reread the directions.  It's rather funny that most states I think I know, but the most popular bird is not the STATE bird after all.  You will be happy to know that Jim and Barb guessed Kansas for the last one, and they would be absolutely correct. 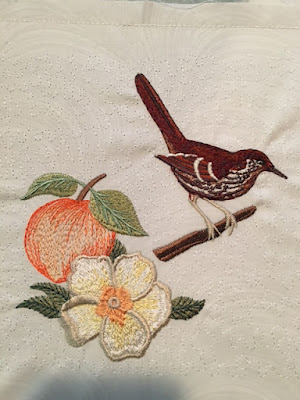 Here are a couple more quilts up for grabs.  I have to admit I hated this fabric soon after I bought it.  It's Kaffe Fassett material, beautiful but hard to make into a quilt since it's so bright.  This one measures 62 x 74. 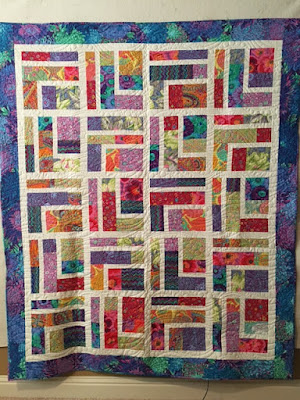 This is the wild and crazy backing for the above quilt.  See what I mean about loud and colorful? 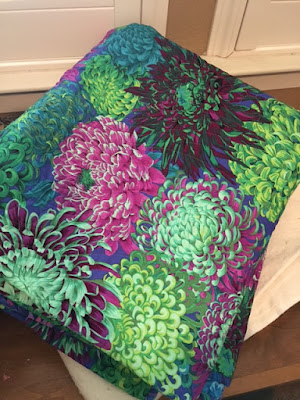 This one on the other hand is more traditional.  A sampler quilt that I really enjoyed making since it's so small.  Only 53 x 53 for the Red Sampler.  The perfect pet size.  Send me an email (audit23@hotmail.com) if you are interested.  There will be plenty more to come. 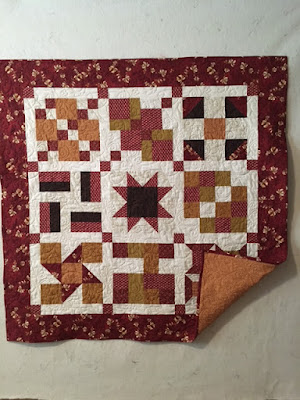 Yup ... he's still looking at me.  If I wait long enough, he barks incessantly until I either give in and play the ball game or give him a small treat. 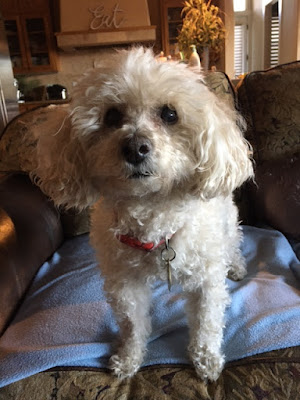 After ten birds, I decided to get back to the quilt I was working on previously.  It doesn't take long to forget exactly what you were doing, especially when it involves cutting a perfectly good square into NINE smaller ones, then mixing them up and stitching them back together.   I'll post pictures of that tomorrow.
What did happen was this mess from just dumping stuff out of the way to make room for the sewing machine.  I think today's project will involve sorting and organizing. 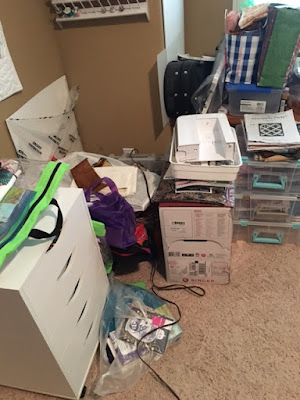 Dinnertime arrived quickly.  Not wanting to eat up all the tamales in one fell swoop, I opted for scalloped potatoes.  I know, not exactly a healthy dinner, but when you're single, you get to eat anything you want!!  No cooking for someone else's palate ... well, except maybe Cooper.  Like any kid, he's pretty finicky. 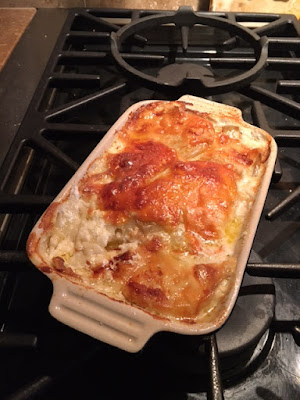 It took some time to figure out the mandaline slicer thingy without adding any fresh meat to the pot.  Not pressing my luck, I cut the onions with a knife.  This is just the simplest recipe ever, given to me by a Chef friend.
Layer potatoes, onions, gruyere cheese (along with some cheddar since I love cheese), salt and pepper.  If you have the time, heat up two cups of heavy cream with five crushed cloves of garlic.  I didn't heat it up this time and in an effort to reduce calories, I used just a little cream and mostly half 'n half.  Pour over the potatoes and bake at 350.  The small casserole above (5" x 8") took 45 minutes so the big one should have been about 70 minutes, or cook until the potatoes are soft.
Yup ... that was dinner.  Truth be told, it's because this is probably my third most favorite dish in the world, next to Mac 'n cheese and tamales.  Who wants to spoil that with meat or vegetables? 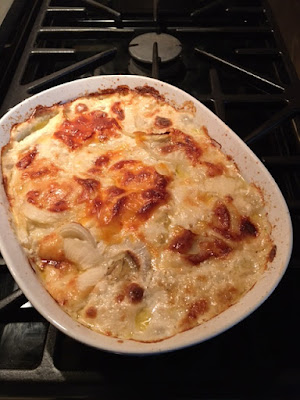 I woke up several times last night to the drip drip of water running down the drainpipe just outside my window.  I don't see any more rain in the forecast, but temperatures have dropped down to the 40's at night.  It may just be time to light the fireplace.  It looks like fall has finally arrived.
I also want to say congrats to Patsy and Bill for braving the media storm and crossing the border into the lower 48 with their fifth wheel headed to the Arizona desert.  We love to see the Canadians headed our way and are happy to report they just drove right across after answering only two questions.  It's about time that border opened up!!!!  Let the good times roll!!