How was your BLACK FRIDAY?  It is Saturday, right?  I seem to lose track of the days.  Since all the Black Friday deals were available a couple weeks ago, I did a little ordering, but have discovered I will be gone before most of it arrives.  FedEx seems to be WAY behind in their deliveries.  I've waited three weeks for a package from Missouri, and it will be over a month before it arrives.  Even the Pony Express could have gotten it here sooner!

In the meantime, the best thing about Thanksgiving, other than being with family and friends, is the leftovers.  Even Cooper got a very special treat ... a tiny dab of gravy on his turkey.  This kid hasn't been allowed "people" food most of his life.  When he was about three years old, there was an emergency trip to a Vet in Oregon which put an end to all the goodies.

Being such a finicky eater, he mostly gets chicken, turkey, eggs and a little rice if I can disguise it enough, along with some potatoes.  That's right, I cook more for him than I ever do for myself!!!  It's like having a house guest that only eats meat and never goes home.

With this face, how can I ever say NO.  He shares in my scrambled eggs in the morning before grabbing his ball for the "game".  Yesterday however, was pretty tragic in his little world.  I discovered one of his top fangs is loose.  I'm sure that's from making the ball squeak 300 times a day.  He has jaws of steel, but a loose tooth from playing tug of war (his other favorite game) is a game changer.  I had to take all his toys away.

You can just imagine how that went over!!  I tried to dissuade him with turkey, but to no avail.  It's a sad day in the Kissack house. 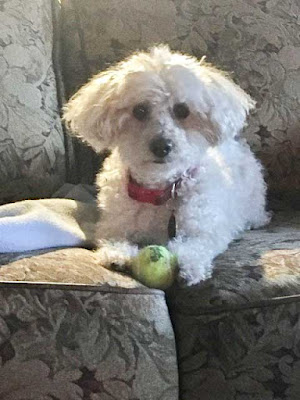 Even Jonathan tried to distract him by screaming most of the day.  When he wasn't yelling, he was ripping his house to shreds, which is a good thing.  Parrots beaks will grow continuously until they die.  If it gets too long, they cannot eat.  Jonathan require lots of chew toys, but these are made of wooden dowels which he destroys in a matter of minutes.  The towels and blankets covering his cage are also shredded.
All that helps pieces of his beak break off little by little so it doesn't get too long.   The hardware store where I purchase all those dowels, loves me.  Plus, it's a good way to get rid of all those old towels instead of throwing them away.  It's a win-win.
For sure if I had realized Jonathan would actually live this long, I would have thought twice about keeping him.  Still .... he's a real card that keeps me company by reminding me he's a pretty boy and calling the kitty, which I no longer have. 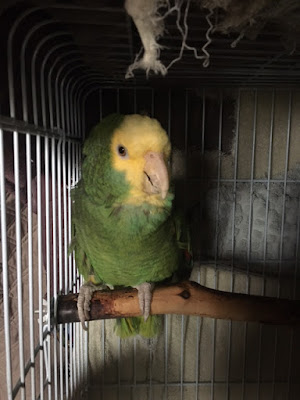 Thankfully, although it was rather fun at the time, I have no more black and white visitors, nor do I expect to see them again.  The Weedman not only sprayed all the weeds, which eventually will be disced into the sand, but they have killed all the grubs that somehow appeared out of nowhere, which is what the skunks were after.
Apparently I was running a gourmet restaurant in my back forty and didn't even know it.   My little fox buddy hasn't been seen for awhile either, but from the chicken squawking two doors down, I think he's found a new haunt. 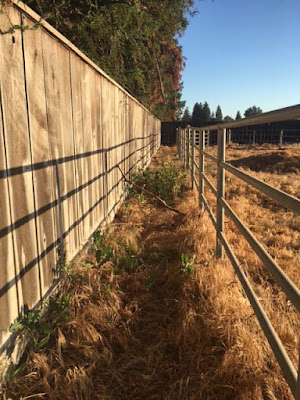 I did make one feeble attempt at washing the fifth wheel yesterday.  I drug the ladder over again, just to see if playing acrobat was feasible.  I know, I'm spoiled ... but the ladder is so much narrower than the old rig, meaning it will be much harder to get this old body up on top.  I decided it wasn't that dirty after all.
It would be nice to be able to check for bad caulking, but it appears I will have to let the RV guys do that.  Better they break their neck than me.  Or maybe once a year I can drive by the equipment rental place and ask for a demonstration of their latest lift. 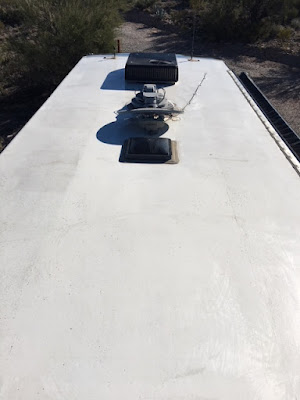 The rest of the evening was spent looking at this little forlorn face.  I even tried a tiny bit of turkey gravy, but it wasn't happening.  I finally gave in and tossed his softest Moose toy his direction.  The blanket on the floor?  He puts the moose down, pulls the blanket over the top, then digs it out, just like he does with the ball if I would give it to him.  For twelve years old, you would think he's three again. 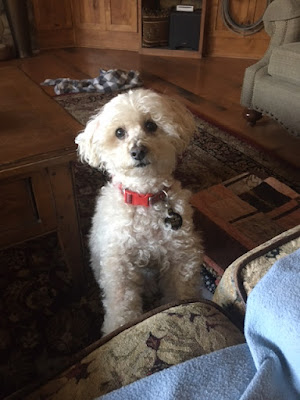 These kids .... they sure are good company, except for the black and white ones!!  I have to admit though, the skunks certainly were entertaining for an old retired gal.  I'm not taking any chances though ... Cooper never goes out without my flashlight making the rounds of the dark back yard first.

Posted by Nancy Kissack at 5:45 AM