It's just like any other Monday for me.  That would be equal to Saturday since I retired.  I'm not even sure why they have Cyber Monday any more since everyone seems to order everything on the internet anyway.  Add to that the sales have been going on for the last entire week, not just one day.

I've ordered quite a few things this last month, with few of them arriving even close to the expected time.  My order of fabric from Missouri Star Quilt, sent by FedEx, lounged around the Indian Reservation in Arizona for over a week.  I kid you not ... it must have liked the weather.

It is now in Sacramento where it has stayed for another week, with no indication if it will ever move again.  Even things that Amazon usually delivers in two days, have taken a week with notice after notice that shipping has been delayed.  It's not like it's on a slow boat from China, but it sure feels like it. 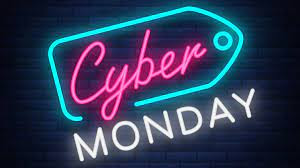 I actually have eleven things on my list, none of which have shown up on the appointed day.  I think the time has come when it's actually easier to drive to crowded Walmart or Boot Barn than to order things over the internet.  So there will be no Cyber Monday for me.
Instead I worked on this quilt and watched football yesterday.  Talk about WOOHOO!  Indianapolis and Tampa Bay fought tooth and nail until Brady just killed them with another great throw.  I'm not even a football fan, but those games yesterday were sitting on the edge of your chair exciting.
Four more squares and this one is done.  Sort of, I still have to sew it all together.  This is one of those grab a square, any square, and sew it to another piece you grab.  That kind of bothers my sense of control and I'm never really happy with the outcome, not to mention the colors don't go with anything I have.  What can I say, it was on sale. 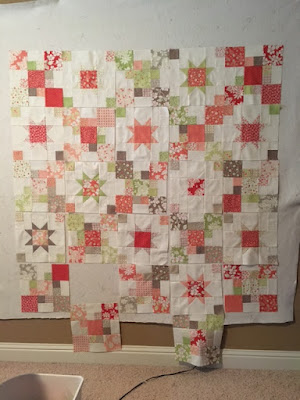 Four days seems to be my number lately.  It took four days to eat up all the Thanksgiving leftovers except some of the turkey I froze.  It also took four days for me to get bored and finally make cookies to use up the butterscotch chips in the freezer.
I've no idea why I bought them because they are definitely NOT my favorite cookie.  What the heck do you do with butterscotch chips?? 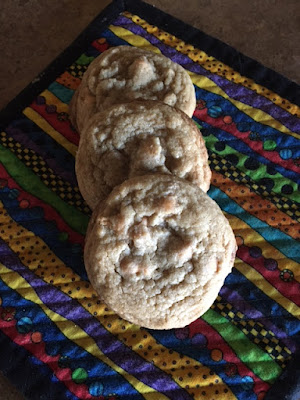 It also took only four days after Thanksgiving to begin making Christmas candy.  I can tell you this recipe was a complete flop!  I didn't have the required pan size, so I cut the recipe in half.  It's a weird one since you layer the bottom with Ritz crackers.
Make a layer of toffee substance with sugar and butter, browning it in the pot on the stove.  Pour it over the crackers.  All went well until I put it in the oven like it said at 350 degrees for 13 minutes.  In ten minutes smoke was streaming from the oven.  NOOOOOO!!!  The caramel stuff was burning nicely around the edges.
Trying not to be wasteful, I poured the chocolate chips over the top (also cleaning out the freezer) and a few minutes later smoothed them down.  UH OH!!  I just remembered I forgot to spray the pan first.  I had visions of chiseling this stuff out of the pan with a hammer.
I stuck it in the fridge to harden up, then turned it upside down on the counter.  Amazingly, it all came out.  YAY!!!  Not so amazing was the pure black ring all around the outside where it was burned beyond belief.  Okay then ..... I grabbed a knife and stabbed it until the black stuff was all over the counter and broke the remaining tiny piece into even smaller pieces.
The taste test:    It's awful ... no surprise.  It taste like burnt caramel.  I tried to salvage a piece or two, but I will have to be craving candy pretty badly to eat it.  Better luck next time! 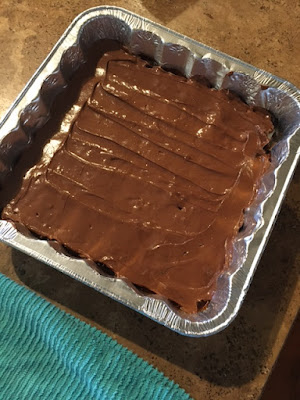 Cooper and I spent the rest of the night on the couch.  I let him hold the Moose, but we didn't play tug-o-war.  I did throw it for him a couple of times, so he was happy. 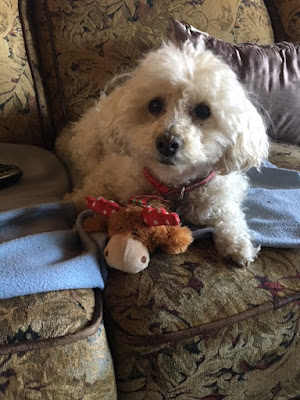 At last today I'm going to head out on my direct path to three stores, two of which will be returns.  I don't want to drive any further or use up any more fuel than I have to.  Maybe if I'm a real good girl, I'll get the four remaining packages in the next week.
Two of those are related to these items.  I won't tell you what it is yet.  I think you will be surprised.  It actually has to do with another hobby I started. 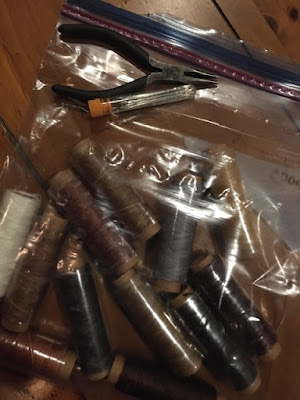 Happy Cyber Monday!!  May all the stuff you want be on SALE!!!