Costco trips can be dangerous, especially when they make their baskets so HUGE that you have a tendency to want to fill it up to the brim.  I'm sure that's on purpose.  I'm like a Labrador sniffing out that pheasant in a field of TWENTY pheasants.   I know it's here ... I just have to find it!!  SQUIRREL!! And I get totally distracted by something else that looks amazing and I think I just HAVE to have.

I was only after two things ... pots and pans.  I started out with a mission, sniffing every aisle looking for my prey.  I must say the days of cheap cookware have gone with the wind.  I finally spotted a big stack just waiting for Christmas customers, but the $300 price tag stopped me in my tracks.  I was thinking maybe that pheasant idea wasn't so good after all. 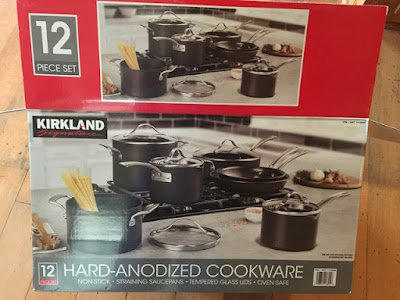 Suddenly I was distracted by the meat section.  Might as well take a look.  I do appreciate the sign PRIME BEEF.   No one around here sells prime anything any more.  It's all third and even fourth grade meat, what we actually used to feed the dogs.
Here's the elusive 99 cents a pound flank steak, a really tasty piece of meat if you cook it right ..... at an amazing $10.99 a pound.  That's $42 for beef you would only have on a Monday night when nothing else was in the fridge.  Pretty crazy!!  Inflation like this hasn't happened in 40 years!!  Can anyone guess why?  The sad part is none of that inflation goes to the actual cattleman who raised the beef.

So I bypassed the meat, although pork was $2.39 a pound for nice big chops.  SQUIRREL!!  Or rather bacon was next on the list of things I really didn't need.  I can say however that this bacon is much cheaper than the one in the meat case.  Luckily it freezes well. 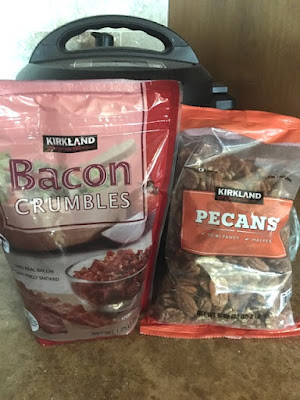 That's when the glorious smell of muffins wafted my way.  The Pointer took over and I made a beeline for the four foot tall stack.  I'm pretty sure $7.00 is cheaper than I could make them.  Like a pointer, no thought was given to the creek crossing, or how I was going to possibly squeeze them into my freezer ... only the smell of those muffins. 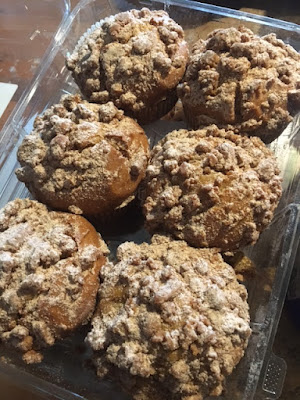 With no meat on the horizon, I passed by the huge allotment of turkeys and ham.  I didn't check the price on the turkeys, but the hams were a minimum of $28.  Not bad really, considering how big they were.  But wait .... SQUIRREL .... I spotted THESE hams, cut in half (I'm pretty sure it's the exact same brand) and only $10 each.  Buy two and there's a savings of $8.00.  Freezable of course.
Okay then, but you can't have ham without Swiss, so a big chunk of that jumped in my cart.  Don't tell me how much it was because I don't want to know! 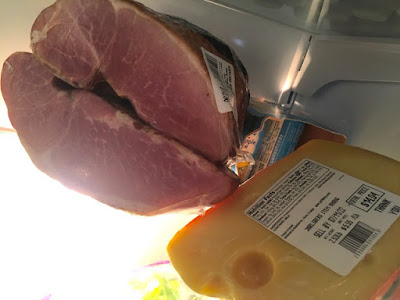 SQUIRREL ... a nice man restocking the shelves began to talk to me.  Can't I help you find something?  Well that's a first ... there's never anyone in Costco to help you with anything.  Pots and pans please.  I've been eyeing these for two years, at the recommendation of my second Chef friend, which is probably why I try to cook so often.  He has used these in his cooking school classes for many years.
WOW ... there was ONE box left on the shelf.  The nice man proceeded to tell me about Costco's tag markings.  I had heard something about that, but had no clue.  "See this little (or rather large) asterisk on the price tag?  That means it's out of stock. "  What you see is all there is left.  If you want it, you better buy it now.
I grabbed that pheasant with both hands and threw him in my cart.  For $129.99 there will be dinner without chunks of teflon in the mix.  I didn't really need the chicken fryer or the two stockpots, but maybe I can put them to good use.  The thing I really like is the clear glass lids so you can see things before they boil over ... AND those pots all have pouring spouts, along with holes in the lid rim to drain noodles and such without even moving the lid.  Merry Christmas to me!! 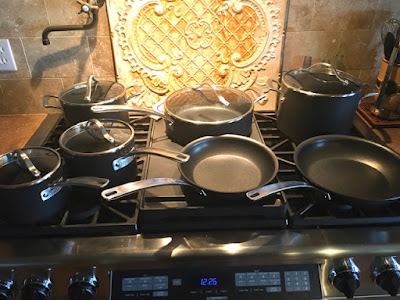 There might have been a couple dove and a muskrat thrown into my cart for good measure just because ... SQUIRREL!!  .... WOW just LOOK at all those COOKIES!!!!
It took me an hour to stuff everything in the freezer.  When you buy for one but get enough for twenty, you have to be creative when it comes to packaging and packing.  Come to think of it, that will REALLY be the challenge when I head out in the RV because the freezer is 1/10th the size of my other one.
Meanwhile, Cooper found his long lost moose toy and carried it around for the rest of the evening. 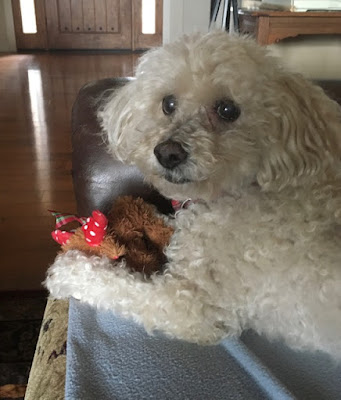 So today is another Magic Kingdom day as I will head out to BINGO this afternoon.  Oh the joy!!!  At least I won't be distracted there while my money flows out of my bank account like it does at Costco.  It's safe to say there will be NO squirrels!!