To "bite the bullet" is to accept the inevitable impending hardship and endure the resulting pain with fortitude".  The catch phrase came from Rudyard Kipling in his 1891 novel The Light that Failed.  It supposedly came from the practice of having a patient bite a bullet between their teeth as a way to cope with the pain of a surgical procedure without anesthetic during the Civil War.  I just cannot imagine.

Dating back to the Indian Rebellion of 1857 (in India, not here), the phrase was "bite a cartridge".  The phrase "Chew a bullet" went back as far as 1796.  Today, biting the bullet holds the same meaning ... coping with the pain of the procedure, mostly nowadays fueling up your rig or trying to buy a steak for Sunday dinner. 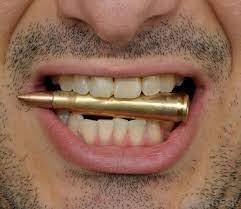 Such was the case yesterday, as I literally stuck a glove in my mouth to muffle the scream as I put fuel in my Jeep.

Don't bother telling me it's because I live in California, and obviously this is not due to the "summer vacation" crowd.  Here's the breakdown: 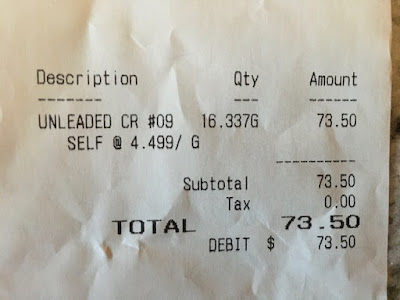 As you can imagine, I really did bite the bullet when it cost me $73.50 to fill up my Jeep.  Yes I can go to Arizona and get fuel cheaper, but that too has gone up.  I'm not trying to get political here, but there is obviously a problem.  We've gone from being able to afford food to the highest inflation rate in 30 years, all in a matter of ten months.
That all means I haven't been going anywhere other than the grocery store and to the Elks lodge once a week.  To fill up my truck would be around $220, so I'm staying rather close to home.  That makes Nancy a dull girl who tries just about anything to fill the time, including filming her parrot while he's talking.
Jonathan is rather particular ... he only talks when he wants to, and rarely can I catch him on video.  The bouncing of the camera is because I'm bobbing up and down, which usually gets him dancing and saying DISCO.  That tells you just how old he really is.
Although people think parrots are very noisy, they are actually rather quiet unless they hear something that bothers them.  Parrots have extraordinary hearing.  Then they chortle and scream like a banshee, making Cooper bark at the same thing, whatever it is.  Usually it's just a car driving by.
I'm also biting the bullet trying not to eat everything in sight, which happens when I'm not busy.  I should probably KEEP that bullet in my mouth as I peruse the fridge every 30 minutes.  I'm determined to go for a two mile walk today to at least get me out of the house.  It's Cooper's favorite pastime ... smelling the smells.
In the meantime, although I have a few weeks left, I'm packing up the trailer and all those quilt tops I've made which are ready for quilting.
When you hear all that screaming coming from California, don't worry ... it's just me fueling up my truck.

Posted by Nancy Kissack at 5:53 AM