I'm loving it!  It's a wonderful 65 degrees on the patio this morning as I listen to a new sound in the desert.  It almost sounded like a rattlesnake.  Nope, it's got tone to it, so it's a bird, but I've never heard anything like it.  He must have huge lungs, because that sound went for for a full minute before he stopped to take a breath.  It's dark out, so I never did find out what it was.

Back to Tombstone, this is the Hollywood version that brings tourists to town.  On more than one occasion, this little town has almost folded up the boardwalks for good.  It would be a shame to see it disappear, so whatever they have to do to keep the tourists coming, works for me.  The mayor works really hard at having celebrations of all kinds that bring in people from all over the world.  Who knew Tombstone was so popular in Europe?

You've seen these guys before ... Doc, Virgil, Morgan and Wyatt.  The OK Corral Historic Complex ... least that's what they call it ... reenacts the shootout maybe four times a day.  You can buy tickets in the gift shop, which of course is where you exit ... through the gift shop ... to purchase trinkets.

That's one of the not-so-popular cowboys on the left.  I'm not sure this was a real thing, but in the movie, the bad guys wore red scarves around their waist.  Maybe that was so they wouldn't shoot their own guys.  At any rate, here we are getting into "character" for a photographer standing next to me.  I took a couple of quick shots, then bombed the whole thing by walking up to the guys and talking for a bit. 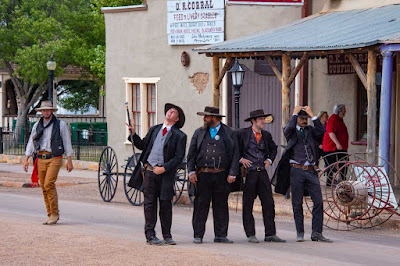 It's fun this play acting, and to make it better, these guys actually get paid for it.  Some of the regulars are missing since they are at the filming of Yellowstone.  This is one of their in-between jobs. 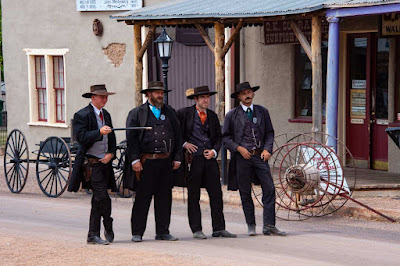 If you are ever in town, check out the art gallery near the end of Allen Street.  Everything here is made, painted or sewed by local artists.  If you could see this in person, you would know why it has all the ribbons.  There's an amazing variety of art here, and well worth the stop. 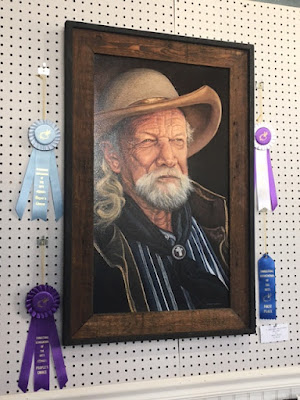 Sadly, I could not locate my western boot store.  Several businesses have finally thrown in the towel.  Hey ... Tombstone might be a great place for a quilt shop!!!
On my way out of town, after thinking I had found the location of Wyatts original residence, I stopped in to scratch my puppy friend that I visit every time I'm here.  She was so sound asleep this time, that I let her be.  She's pretty old and rather deaf.   If this house ever goes up for sale, I'm buying it!!! 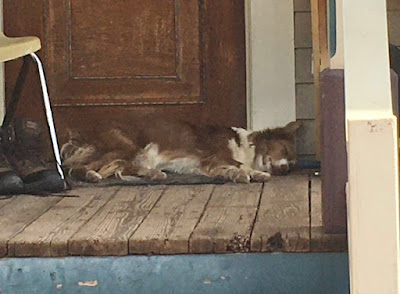 Next adventure ... there's an old homestead around this area that I was determined to find.  I had no directions, as that only results in way too many people clamoring over the hills just to steal stuff.  I knew this was on private property, so I got a special permit to be here.
It was late in the day when I finally found the almost hidden entrance.  It's a little intimidating when you're alone, and with two roads to choose from, it was eeny meenie miney moe.   I was off down a rough rocky narrow road heading to who knows where. 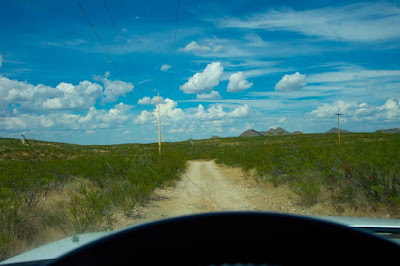 In case you were wondering about how much growth there has been with the monsoon rains, you can barely see the cattle.  After about a mile, the road was rather washed out, but I forged ahead past the corral not far from this spot.
That's when I spotted the road going up the side of a cliff to the top of the mountain with no old ranch house in sight.  RATS!!  Maybe I took the wrong road.  Now of course there is no place to turn around.
Suddenly I had the most ominous feeling I was completely lost.  That's not good at all and I take those feelings straight to heart.  SO, I finally found a bare spot along the road and hoochey-gooed around until I was heading back the way I came. 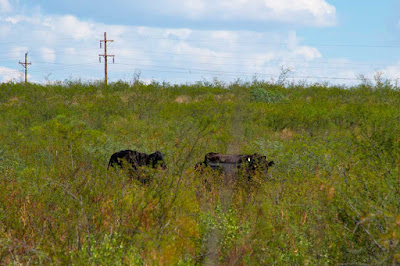 It was too late in the day, or I might have tried the second road just for kicks.  No worries, I'll be back after I do a little more investigation to find out exactly where that house might be.  Just look across the countryside.  Can you imagine riding horses chasing cattle (or bad guys) across this?  No food, no water ... those guys were tough.   At least if you were on a horse, you wouldn't have a flat tire and you could go up any hill with no problem. 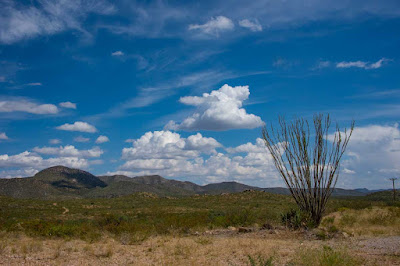 So ... I drove back along the road to see Tombstone in the distance.  People flooded in here to make money either mining for silver or mining the miners for their cash, not to set up a homestead ... but what a beautiful area to hang out. 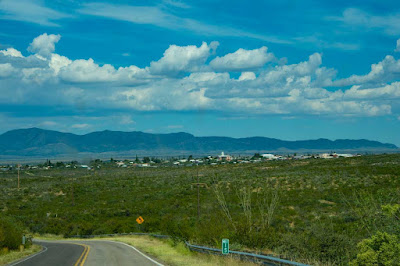 We had another big storm last night.  I got a quick video I'll show you tomorrow.  AND I finally found out what was digging these one inch holes by my back door.  SPIDERS of course!!!  Let's see if I can capture them on video.