This is my morning dog's eye view of the ball.  It's never far, always lurking around the corner, or sometimes stuffed down in the couch cushions, but always waiting ... waiting for that first roll.  Once you touch it, if only by accident, you are instantly pulled into it's sticky web of play time.  It's probably why I can still move around, having moved around on the floor so often for such a long time.  By the way, never EVER say the B-A-L-L word.  You will be sorry!! 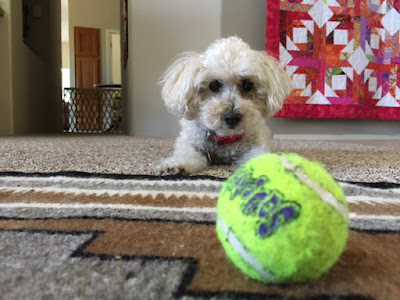 Thirty minutes later I finally get a reprieve to finish my cup of jo on the couch.  Don't move even a tiny bit, because that means the game is resumed ... always at your expense.  I know not how he became so obsessed. 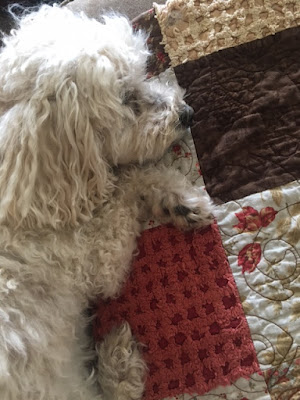 On with the day, this beauty came out to get a few rays in the morning sun.  He appears to be an Eastern collared lizard, though I wouldn't bet money on it.  There are lots of them around here, cleaning up all the flying things that end up on the ground.  Several of them live in my back yard.
When you walk by, all you see is a blur as they head for cover.  In the mornings however, they hang out getting warm after the night cold air.  It's a chilly 60 degrees on this morning.  I think fall has arrived. 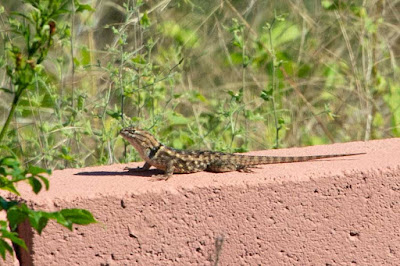 It's rather weird that I haven't seen many big critters around at all.  For several days in a row, there will be no one at the water station, then only one or two coyotes.  I hear them in the mornings, but from a completely different direction than normal.
These guys are pretty territorial, traveling an average of ten miles a night over their preferred hunting grounds, which can range from 5 to 15 miles.  As I've mentioned before, I only have one resident rabbit, so that may be why they don't show up very often.
When they do stop by on the trail to their hunting grounds, they always mark their territory.  With so much water everywhere from the rains, they don't even stop to drink.  These new residents seem to have chased out the group with the black markings on their back.  The ebb and flow of nature seems to be ebbing at the moment.   It doesn't help that a lot of their territory is being overrun with houses.
The big plan for the day was lunch at a new restaurant.  That gave me plenty of time to whip out this little Halloween quilt.  It's a terrible picture and it really doesn't look much like this at all.  I broke my cardinal rule by letting someone else figure out how much I needed to make the backing wide enough.  The piece is too short. 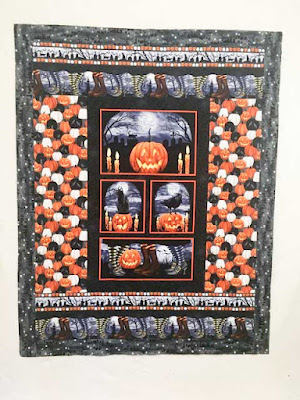 In case you were wondering, here's the code of quilters.  Just ask Cindy and Ray .  They will confirm this is a true statement. 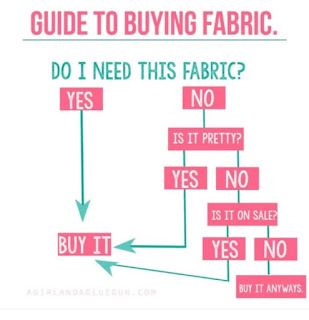 At long last it was time to head out with Patty for lunch at a new Mexican restaurant La Herradura.  At least I think that's the name of it.  As I waited for Patty to pick me up, I watched the weather radar.  It didn't look good.  We were about to get hit by the ORANGE/RED.
That's never good in the desert.  Lightning was flashing all around us, VERY close.  Rain came down in buckets, almost completely obliterating the road and making literally 6" deep rivers running down the sides.  It's just crazy how much water can come from the sky.  The river that had no water, filled up quickly.
By the time we got to the restaurant parking lot, there was a flood running down the middle like I've never seen before.  In 15 minutes, you wouldn't even know there was more than a sprinkle. 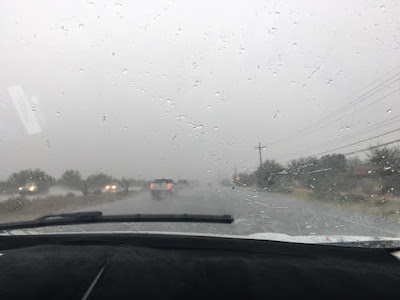 If you haven't eaten at one of these restaurants, you should.  It was DELICIOUS with a capital D.  It was a day of breaking the rules.  Patty and I both should have taken HALF of this home.  Instead, we both ate our whole plates and were miserable for the rest of the night.  I'll definitely be back for more!! 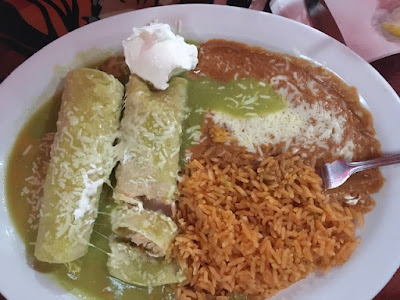 I got home just in time to get my electric bill.  You've got to LOVE Arizona when it comes to that.  My commercial air conditioner ran 24/7 this month, except for the last three or four days.  My bill came to a whopping $136.00.  If I did the same in California, I would have paid over $800.00.
Well ... except now my California bill is only $15.00 .... SOLAR!!!!  Should have done it oh so long ago.  There's good and bad about both places however, which is why I'm lucky to be able to enjoy both.
It was a nice day as I loaded yet another quilt on to my machine.  It's a new pattern, that I'll show you tomorrow. 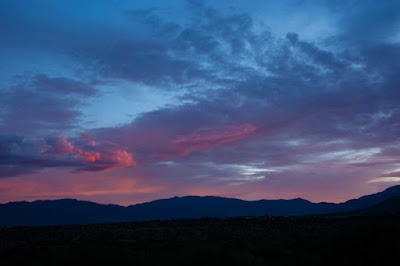 It's interesting that this morning Cooper has been at the window barking on and off.  There must be something outside the fence.  No, I'm not going to look because it's dark outside.  When the sun comes up, I'll retrieve the camera for a look see.
Maybe he's just barking at his reflection in the window.  No one said he was THAT smart!!

Posted by Nancy Kissack at 6:10 AM