In The Dark Of Night

I definitely see winter coming to the desert.  It's 63 this morning, what you could even call chilly.  No wonder every time I was in the Northwest I could tell an Arizonian a mile away.  They were always wearing the big jackets when it was 60 degrees outside.  I may even have to turn on the fireplace!

Here's a view of the huge tree I'm always pruning.  It would be massive if I let it go, especially this year with all the rain.  The branches have been known to grow as long as my RV cover that lives behind it.  It also whacks the roof and the chimney of the house when it's windy.  Be careful if you walk under it, you will end up with a huge thorn in your head, not to mention that it LOVES to pull your hair, just like a mean little kid!!  Be sure and duck!! 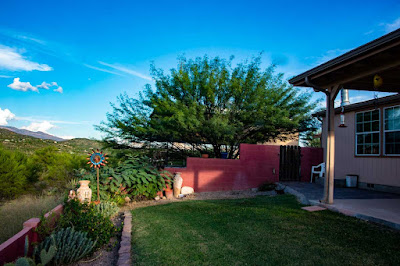 While beautiful white fluffy clouds sauntered across the sky, I closed up the sewing room and put my quilting machine to bed for a few months rest.  You have to admit, the clouds in Arizona are epic. 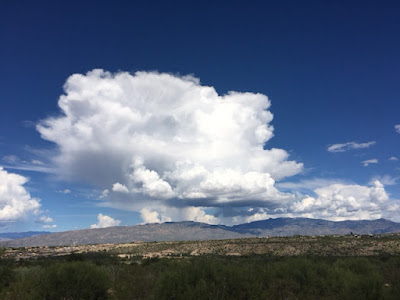 The next time I looked out the window, this is what I saw.  This time of year there's not a lot of venturing out or hiking.  Getting caught up in one of these is not fun.  Apparently Tucson has received 5 inches of rain so far.  Their normal is about 1.6 inches.  It's been a good year in the desert.
In case you were headed to Quartzsite, the traffic on 95 has been delayed often by water rushing down the gullies, depositing debris on the roadways.  Making it even more fun, they are apparently putting in a roundabout (my least favorite thing) in town.  I'm not exactly sure of the location, but be prepared. 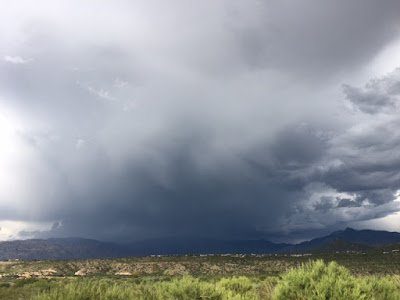 What's also weird is it will rain on one side of my house, but not on the other.  There are definite lines drawn in the sand.  With nothing else on the horizon, what better than a good book read on a rainy day.  I'm trying to find the old stagecoach roads from Tombstone north to Benson.
While looking that up, I discovered the supposed REAL reason the gunfight at the OK Corral happened.  There's a lot of history there for such a small town.  More on that later. 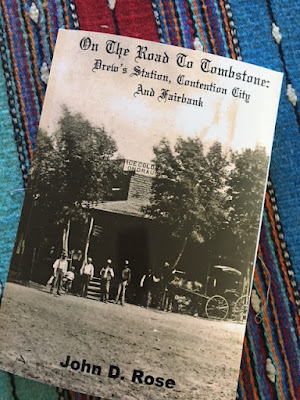 In the meantime, I've been waiting and waiting for clear skies to do some night photography.  Finally the clouds moved out just enough to see some stars.  If you click on the picture, you will see more than I did as I looked out across the mountains.  I could barely see the four big stars.  The camera can see much better in the dark than I. 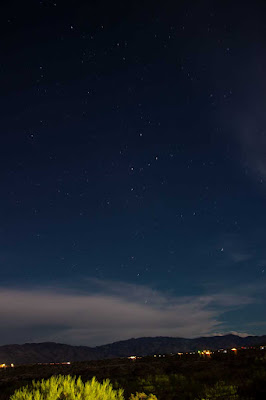 After about an hour, the clouds were still hanging out over the mountains.  Here's the interesting thing.  As you know, the earth is turning all the time.  You never really think about it unless you are taking night pictures.
Sadly, my remote trigger release could not be found.  That means holding the button down with my finger for about two minutes.  That's just long enough to get a nice cramp ... but you sure can see the stars better. The movement of the earth makes them show up as tiny trails.  If I held the button down for five minutes, you would see long star trails across the sky. 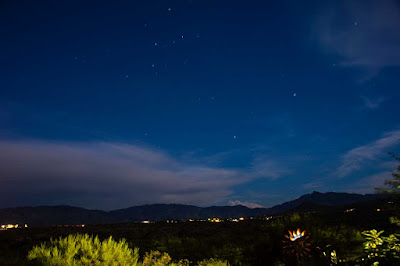 Looking to the left, you can see the lights of Tucson down the valley.  I must say it's rather creepy to be out on the patio at night in the dark.  There's lots of weird sounds, scratching and generally Halloweenish noises going on.  I didn't stay out there very long. 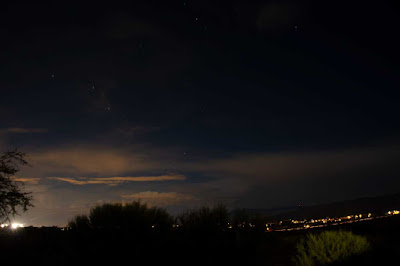 The wind has picked up again bringing another storm in from the south.  That makes it a little easier to handle the not-so-fun task of packing.  I always seem to end up with twice as much as what I came with.  I mean really, even my tool box is now stuffed with boxes and bags.
Time is getting short.
Posted by Nancy Kissack at 5:47 AM