Continuing on from yesterday .... Benson to St. David town to Tombstone only revealed even more businesses gone under.  How sad to see so many of these old places disappearing.  Anyone know about the Holy Trinity Monastery?

If you've driven this direction, you've probably seen the RV parking sign.  It appears it may be closing for good.  The head of this monastery is in Italy.  They control the strings, even from so far away.  It appears they do not have enough monks, so after 40 years, the monastery has been ordered to close by the Abbott General and his council who reside in Italy.

After refusing to sign documents closing it, Father Henri was stripped of his title and asked to leave the property.  So sad ... his home sweet home of 40 years, the location of his dead sister and his step father, has to be abandoned.  I have not heard if the RV park will remain open or not.

Here's what I was really looking for ... the home sweet home of Wyatt Earp.  It's a little hard to decipher the area based on maps of old. 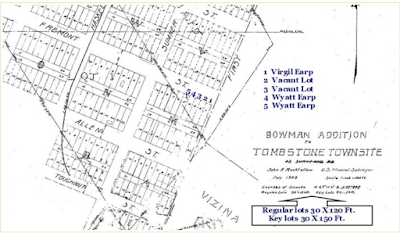 But first, let's take a walk down Allen Street towards the infamous OK Corral.   It was a breezy ... actually very windy day, throwing up dirt from the street in whirlwinds.  I was quite surprised there was hardly anyone there at noon.  This place is usually hopping by now full of tourists hoping to see a ghost or two. 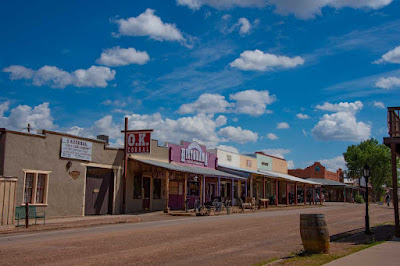 All of that shooting did not occur here, but back behind these buildings, closer to the next street over.   The company who owns (or maybe leases) this section holds shoot-outs often.  The first crack of gunfire was extremely loud and actually made me jump, just as the local Marshall was driving by.
He laughed, so I waved him over.  We had a little chat in the middle of the street about how he just checks his watch every time he hears it, to be sure it's one of their performances.  I mentioned how fun it would be to patrol the streets on horseback, but he said his horse didn't have air conditioning.  I get it. 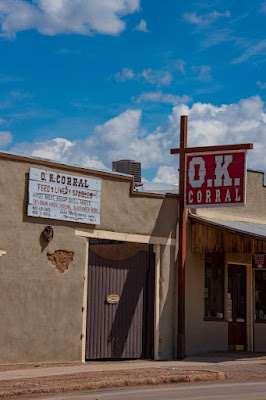 I had checked with some locals previously, to find that Puny John's little restaurant has GREAT bbq and pulled pork sliders.  Puny John's it is!!  The sign said OPEN, but the door was tightly locked.  Closed on Wednesdays.  RATS! 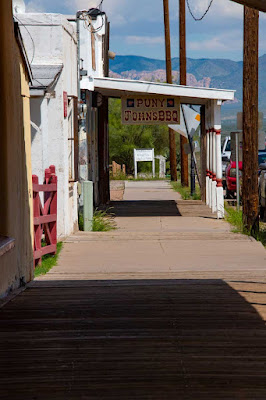 SO ..... I was off to my favorite hangout, Big Nose Kate's saloon.  As usual, I got a little distracted by the stagecoach.  Mostly I check out the condition of the horses. 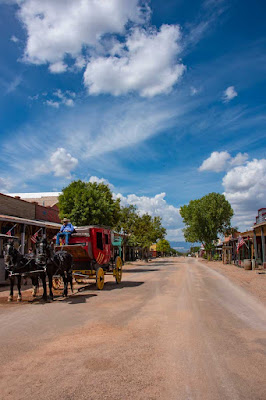 The stagecoach seems to be sporting a new paint job and a nice American flag.  Four people climbed inside and off they went to roam the back streets of town. 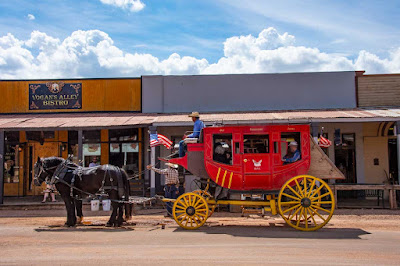 Not a sole was eating in Kates.  Even so, I felt bad about taking up an entire table, so I sat at the bar.  The barkeep was an excellent waitress.  For some reason, I know not what, the word pastrami came out of my mouth.  My brain didn't register REUBEN until it was too late. 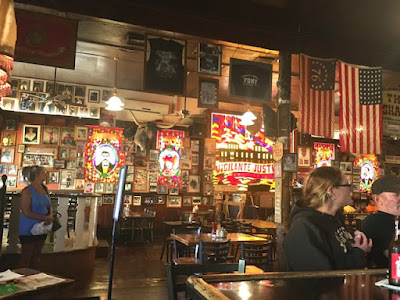 It comes on a sourdough roll, too tough to eat without leaning over the table ... except this is a bar that you can't get close to.  My apologies to whoever has to clean up the floor at night.  It was delicious (not near as good as the reuben), although WAY too much food and cost me $22.00 including tip.
Want to feel uncomfortable?  Sit at the bar and order water.  I ate what I could, thanked the gal for great service and headed out the door. 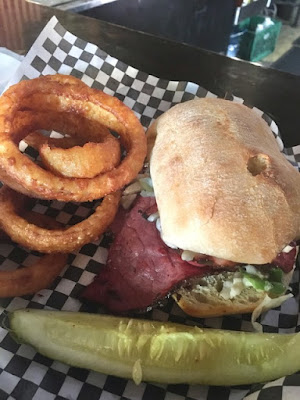 Too bad I didn't have THIS map ahead of time.  Still confused about the actual location when I got back home, I pulled up this image.  As proven by recently found mortgage documents, there were five lots on Fremont Street (see the above map).  Virgil lived in the bigger house on the corner, then two empty lots, then Wyatt's smaller house.  All of those were located where the red dot is.
The blue square is the site of what is supposed to be the house where Wyatt and Mattie lived. 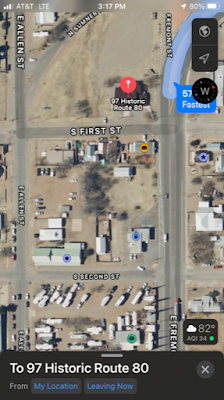 It even sports a statue of Wyatt, however the recent documents prove that not to be true.  Apparently Mattie wanted to move up in the world.  She hated that Virgil had a nicer, bigger house, so when interviewed at some point, she stated she and Wyatt lived HERE, instead of the actual location. 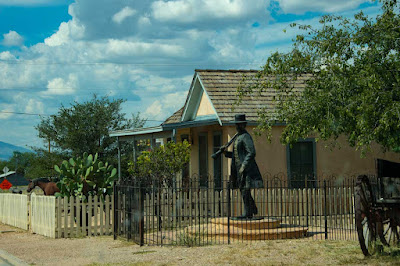 When Wyatt began his vendetta to avenge the life of his brother, he needed money.  The only way to get it back then was to mortgage his house, which he did for $365.00.  After all the killing took place, he had to make a quit exit or go to jail.  This image shows Fremont street horizontally across the picture.  That's Virgil's house on the corner of First, with Wyatt a couple of doors down.
The latest documents to be found are from the newspaper where the Mortgage Company filed suit against Wyatt for not paying back the money.  Somewhere along the line, Wyatt's father must have paid the loan in full, because later court documents show him as the owner of those lots.  Mattie went with Virgil and his family while Wyatt searched for the bad guys.  As you probably know, he never returned, nor did he meet up with Mattie again.  That's when he ran off with Josephine. 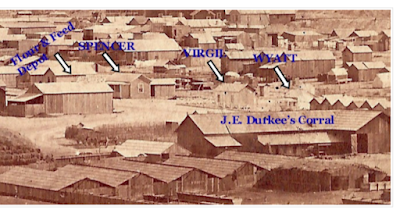 So after my attempt to find the actual location, I failed again.  I thought the houses were on that side of the street ... the house standing there.  I was wrong ... it is down the street to the right where the telephone pole is.  Oh gee ... I guess I have to go back once again!!
That building behind the tree next to the pole has just been built (sort of recently anyway) as Virgil's Corner Bed and Breakfast on the property Virgil used to own.  There's something about the big posts out front being part of the old house?  It is facing First Street instead of Fremont, as their original house did. 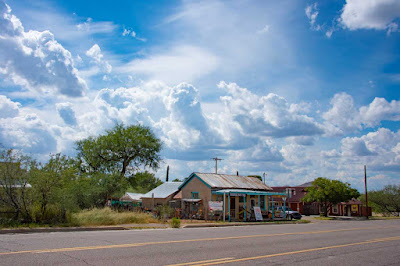 To cap off the day, I walked over to the Ice Cream Parlor and had a cold one.  Wow ... their ice cream rivals anything I've had.  That butter pecan was the best I've eaten.  It was hot, the ice cream was melting, so I chomped it down in record time, not taking one single picture!!!  Guess I'll have to go back and get another two-scooper just to take a picture.
It was getting late .. time to head back to MY home sweet home and kisses from my puppy.  There's a little more to the day where I tried to get lost, but I'll post it tomorrow.  It was a lovely day in my all time favorite town.