It was a morning filled with anticipation as I sipped my coffee and scratched two new bites.  True, I was gone longer this time, so the bugs may have set up permanent homes.  I took two baby Benadryl yesterday, hoping to stop the agony.

As soon as my coffee was gone, I attacked the bedroom with a vengeance.  I took both mattresses off the bed and sprayed everything, including the drapes.  It supposedly lasts 12 months, so hopefully I'll be good for awhile.  Then I sprayed around the edges and everywhere I was sure Cooper would not walk.

I probably could have slept in the second bedroom, but instead Cooper and I spent the night on the couch. Oh my aching back.  Sometimes my ideas are really bad.  This morning however ... the light bulb went on.   I have some OFF spray in the cupboard.  I'm taking a shower in it tonight and hoping for a good nights sleep.

And then it was time.  I imagine no one has done any colt training, so I'll give you a little 101.  Catch the colt any way you can and start by finding his "oh I love that scratch" spot.  Do a lot of rubbing all over before teaching him to give to the halter.  You pull, he comes.  Next up get them used to the blanket and saddle, running them around in a round pen to sort of get the buck out.

This process may take a week or more.  These guys did it in 90 minutes and were riding the colts after 30.  The second day they spent most of their 90 minutes getting the colts to go over tarps on the ground and over poles.  On this day they had 20 minutes to saddle and ride in the round pen before heading out.  Every horse is different and every trainer does it differently. 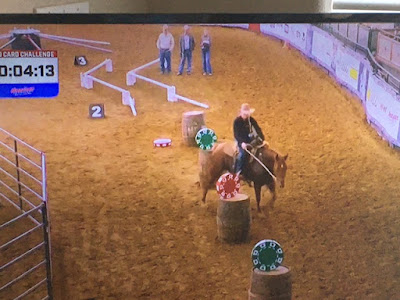 The best thing is to get the horse OUT of the small pen and give him a job.  Go around barrels, open a gate, anything to get him moving off and not thinking about what's on his back.  After that first 20 minutes, they had to go through an obstacle course.
The first guy had lots of point deductions (his helper touched the horse, which is not allowed) and he had no chance to win.  He also had a very scared horse.  In true cowboy fashion, he chose not to fry the horses brain by taking him out on the obstacle course.

The second trainer also had a difficult horse.  I think she was from New Zealand and rode English.  She had the gift of knowing when to back off with this horse, and was one of only 3 to go over the tarp. 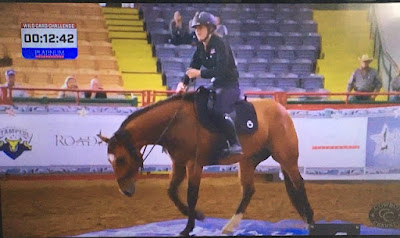 As you can see, there is a low red jump, followed by a white jump (which got knocked over), followed by walking through these pool noodles.  I can't even imagine what the poor horse is thinking.  If I remember right, only one horse went through this.  You have to have made a good connection with the horse, so he trusts you and will do whatever you ask. 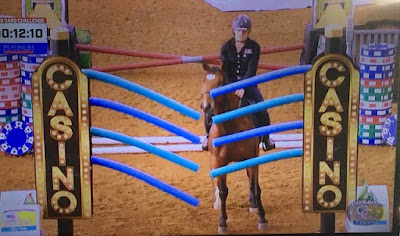 I mean really, it took me a week to get my horse to step over low jumps.  These horses have never seen anything like this, and yet they walked around this obstacles, BOTH WAYS! 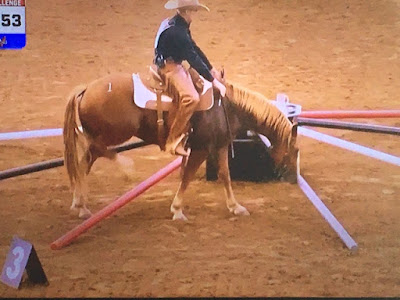 I did note the difference between the men and women trainers.  The women were much more methodical and low key.  Patient is the word.  The guys were almost frantic trying to get the horses to do what they wanted.  I know this is a competition, but that doesn't work well in horse training.  They tried to go way too fast. 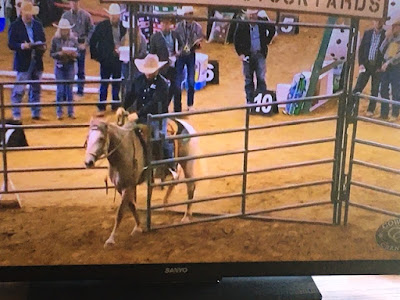 As you can tell here, this horse is done.  He is overwhelmed and just shuts down.  You can also tell he's covered in sweat, another sure sign of nervous exhaustion. 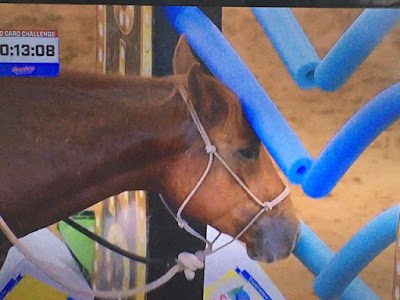 On the other hand, this is the colt I picked ... Bama Crown.  This trainer from Oregon was cool and calm the entire morning.  He worked slowly through everything.  It helped that he actually had the best horse in the lot.  It's the luck of the draw (and not the horse he wanted), but had another trainer picked this horse, that may not have been true. 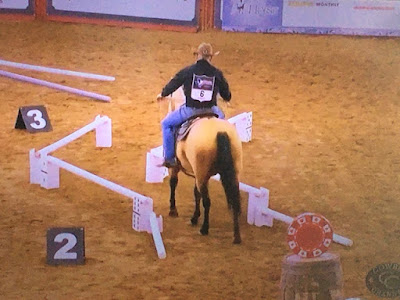 He slowly and carefully went through 10 of the eleven obstacles. 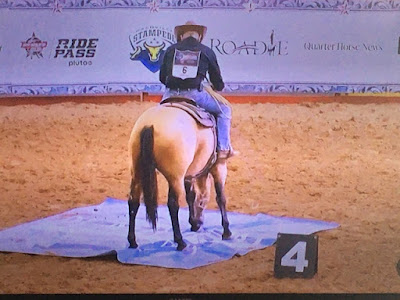 He didn't mind having a rope swung over his head, nor pulling this heavy object. 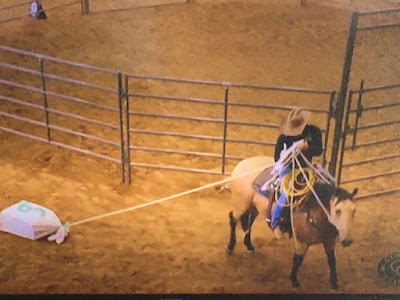 He went over the jumps with no problem, but only put his head through the noodles. 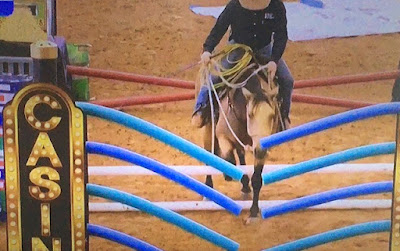 He wasn't exactly happy about the swinging dice (always watch their ears), but he finally went through with a little help from the rider. 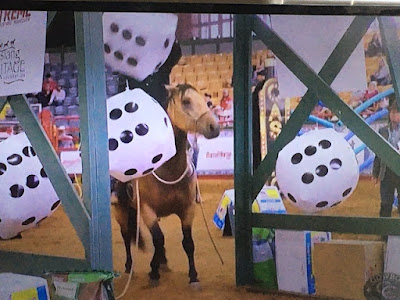 The last few minutes, they all got to do a "freestyle" section, where this guy stood on the saddle to play his guitar.  It lasted less than one second.  Thankfully the colts were only subjected to the obstacles for 35 minutes. 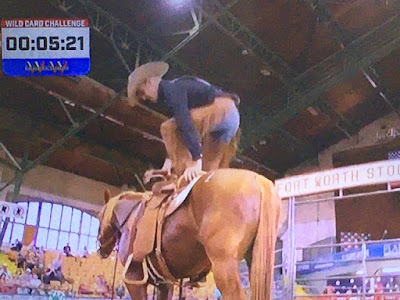 You can guess who won.  The buckskin and J. R. Robles from Oregon.  He will be entered into the World Championship in Kentucky ... AND he gets to buy the buckskin from the 6666 Ranch in Texas.  I hope he has deep pockets!!
Just for kicks, I asked the ranch for the pedigree on that buckskin, now named Stitch because he cut his face up on the trip in and had to have stitches.  Surprisingly, they sent it to me in record time.  No wonder I liked that colt the best.  He has the same bloodlines as all of the colts I owned and trained.  I'm sure they are out of my league with probably a $ XX,XXX.00 price.
At any rate, it was great watching them work the horses.  I would definitely love to get back in the training business, but alas, I'm too old and would spend all my time scratching the bug bites.
It's a new week and time to chop down that tree!!