Shhhhhhhh ... can you hear it?  Coyotes are close ... VERY close and talking to each other a lot.  Boy do I love hearing those guys have a conversation.  Then it all becomes quiet, with only the early morning cooing of the dove and the calls of the quail.  If someone would just take a large vacuum cleaner and suck out all the biting and stinging things, this would be paradise!!

First off ... prayers for Dave and Marcia as they outrun Hurricane Ian, or whatever his name is.  It seems to be following them as they head north trying to get out of its path.   It appears to be keeping to the west of Florida with 75-80 mph winds.  Maybe the bugs in Arizona aren't so bad after all.

Just an observation here ... if you had an electric vehicle and you needed to escape a hurricane, you better start out a week in advance in order to have time to charge your car along the way.  I'm pretty sure cars with dead batteries will be pushed off into the ditch, not to mention spending an hour charging your batteries with a hurricane bearing down on you.  Anyway ............

There ARE good bugs, as I have mentioned in the past.  At any one time there are two to four mantis on my screen door.  If you're squeamish, don't look.  He just caught a stinging ant-like thing and is chowing down.  This is the first time I've actually seen them in action.  Pretty gory if you look too close, but dinner was served. 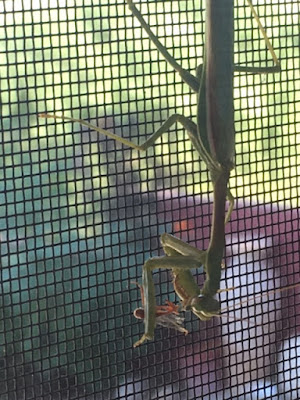 I spent the early morning hours wrestling with another mesquite tree.  This really must be something from the dinosaur ages.  The one-inch long spikes cover every limb.  Sorry, but it had to go.  The dead leaves are what's plugging up the drains. 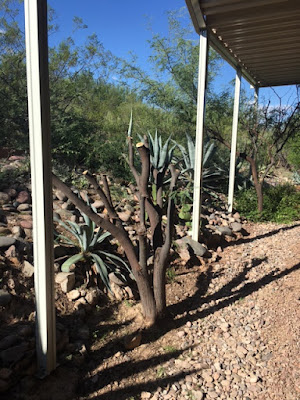 I ended up with a nice slice on my arm and three more pokes on the other side.  Just about everything around here bites!!  I'm looking forward to yelling TIMBER when I cut the trunk down. 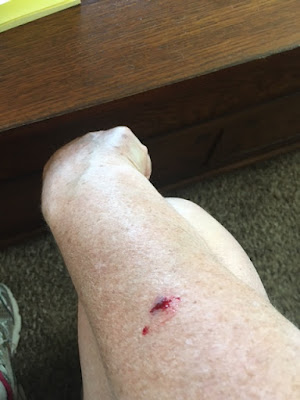 I'm starting a whole new pile for the next pickup date, the perfect location for critters to hang out. 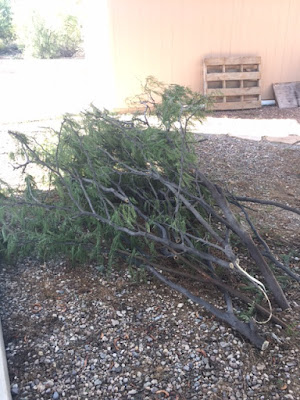 In the late morning, Patty and I headed off to Green Valley again to where else ... the fabric shop.  I have a new appliqué project with buffalo, cowboy boots and feathers.  We also stopped off at Dazees with a box of donations Patty had.  The nicest people work there!!
That was followed up by a Popeyes hot chicken sandwich.  I'm a lightweight ... my throat is still burning.  You know what would make it better?  That sandwich smothered in maple syrup.  Oh yeah!!!!!
I got back home just in time to start on another binding marathon.  There is one down side to quilting all that lovely fabric.  Binding is it's name and it's all done by hand.  It's a little more tedious when you have a puppy taking up half your lap, who growls if you move too much.  Not a mean growl ... just a sit STILL notice.
The game camera focused on the big hole digs came up with nothing but a mouse/rat looking thing with a tail longer than it.  Kangaroo rat?  I have no clue, it was so far away from the camera.
Last night these guys came for another visit.  The monsoons seem to have not only produced lots of greenery, but lots of javelinas and coyotes.  They have been coming out in record numbers.  Sadly, I haven't seen the bobcat nor any of his markings in the last two weeks.
This morning I'll be heading out on a little hike down into the big gully, following the river up into the mountains ... that is if I can find a parking space that's not flooded.  Light rain is forecast for the next three days, but it usually happens in the afternoons.
Or not ... as I look outside, there's black clouds in the morning sunlight.  Just another wonderful day in Arizona.
Posted by Nancy Kissack at 6:23 AM