I'm Not Driving On Sundays

It was a lovely cool Sunday morning as I listened to the ringing in my ears.  Not even the birds were chirping on this morning.  Too many clay pigeons killed with a shotgun at the pheasant hunting facility where I worked for a few years.

You could shoot five stand (you stand in one place while clay targets are thrown and rolled from all directions) or you could wander down the creek and shoot targets thrown into the air.  Then there was always pheasant hunting.  You buy five or six birds which were released on the property.  If you got them, we cleaned and gutted them for you.  There's nothing like sticking your hand inside a  ... well I won't go into that part.  I've had a lot of "different" jobs in my short life.

This is pretty much my every morning view ... Cooper puts the ball on the coffee table so I will toss it across the room.  He fetches, you throw, etc. etc. 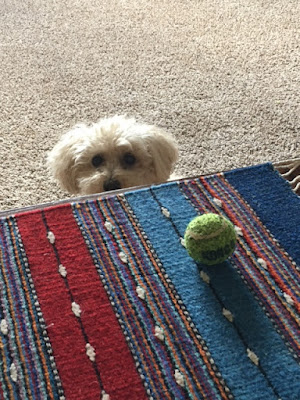 Since I required batteries for the camera, I made a quick trip to Walmart not too many miles away.  I was actually driving the speed limit, minding my own business, when I saw a car about to pull out in front of me.  I was really close.  He pulled up ... waited ... and purposely pulled right out in front of me.  I had to slam on the brakes to keep from hitting him.
He then proceeded along in the 45 mph zone at a slow 30 mph pace.  What the heck?  This was no old guy, this was a smart a$$ young guy who then slammed on his brakes right in front of me as he flipped me off.  I locked them up, as did the guy following me.  Good thing I had a witness.  Apparently this dude thinks this is a funny game!!
Too bad, so sad, he got stopped at the only stop light on the road.  I made a big show of getting out a piece of paper and writing down his license number.  I guess he forgot about that.  As soon as the light changed, he shot off like a bullet ... going well over the speed limit.
Not wanting a confrontation, when he turned the way I was going, I went the other direction.  What a jerk!!  And that's not the first time it's happened to me.  He came from one of the new subdivisions around here.  Me thinks the trash are moving into our nice little town.  Guess I won't be going out on Sundays any more.
My camera did work with regular batteries, but it's not a good idea to use them.  Having found some on my trek to town, I switched them out in time to capture my shy friend.  For some reason it seems he or she has been kicked out of the group.  He stayed for quite some time.
Then this gorgeous buck stopped by again.  I'm pretty sure I've heard him wandering around the house at night, checking out the quail block and banging around a bucket.  This time it's actually close to 6:00 am, so I was up and didn't even see him.
Once back at the house, it was time for a little more maintenance.  The yellow light may not attract as many bugs, but there's at least a cup of them in this light fixture.  Every year it must be cleaned out. 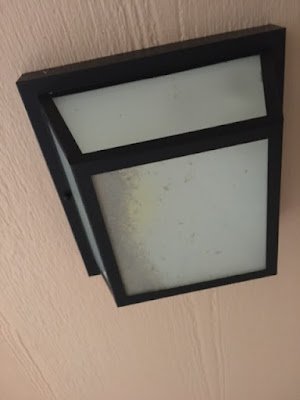 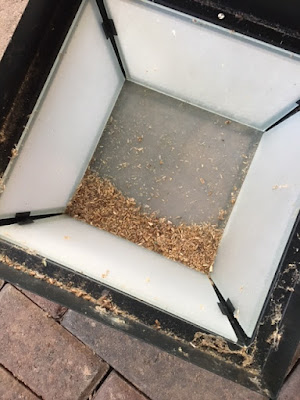 And then it was back to quilting while my watchdog kept a close eye on the door.  He saw the bug spray guy walk by the window once, and then the Amazon guy knocked on the door.  If there's the slightest sound now, he barks up a storm.  GOOD DOG!!! 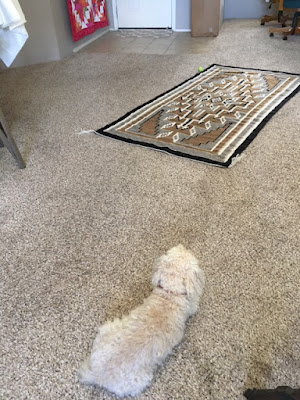 This was a quickly thrown together scrap quilt using all materials I already had.  I love it when that happens.  I'm sure you already know, this is my favorite pattern. 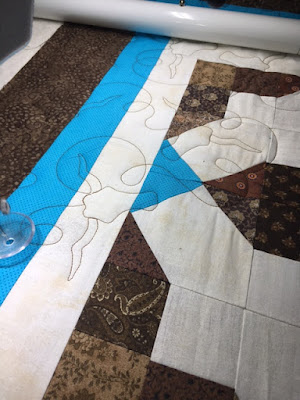 I still have binding to sew on all these quilts ... I think there are now six ... which means hauling them all back to the house where the binding is.  I definitely need to learn how to do binding on the quilting machine instead of by hand. 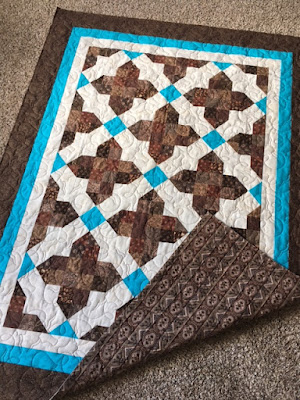 And so another day is in the books here in the desert of Arizona.
I did have one nice occurrence.  I got my PG&E bill and for the second time ever, didn't have a screaming fit.  My $15 bill suits my accounting brain perfectly.  Add in the true up and I will be paying about $300 a year for electricity instead of close to $4,000.  My system will be paid for in four years.  Not bad ... not bad at all!!