Can you believe it?  Even more rain is in the forecast as I soak up the cool 75 degrees on the patio.  There have been some strange noises in the night, something akin to those kitties that howl like a banshee.  The rains seems to have brought more than one "tribe" to the area, which means war over just WHO gets to live here.

The javelinas seem to be the only ones who don't care who goes where or does what.  They can live off the land ANYWHERE.

As I was wandering through the far reaches of my computer, I came across this image.  I can't tell you the  year, nor do I really want to remember.  I was skinny then ... and I'm trying to block the current situation from my mind.

This was when Cowgirls were COWGIRLS ... when cowboy shirts were awesome.  You could buy this in the local western store and wear it to a competition or just down the street for Thanksgiving.  It was one of several I had to save up to buy ... and I lived in them 24/7. 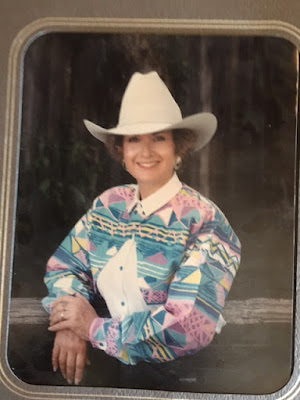 I had a penchant for old clothes back then.  Some of my collection of vintage wear came from my Grandmother.  She kept a couple of old dresses, and more importantly, old undergarments.  Why, I have no idea, but they are extremely hard to find.  One day while scrounging around in the hope chest she left me, I found a purple velvet wedding dress.  White was not a thing back in the day.

That began the hunt for 1800's clothing.  Back then, you could find many items in antique stores.  I spent HOURS looking for anything I could wear.  That was the deal I made ... if I could wear it, I could buy it.  If you've ever been to Tombstone, you know there are always some people walking around in the garb of the time.  I did that several times in Sonora California.  Roll playing can be fun!!

This particular image is interesting in that I can't for the life of me remember WHERE it was taken.  The stockings are red ones from my Grandmother's closet.  In fact, I still have all of these items, though the only thing that still fits is the umbrella ... maybe the hat. 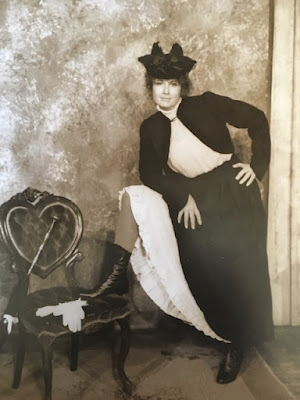 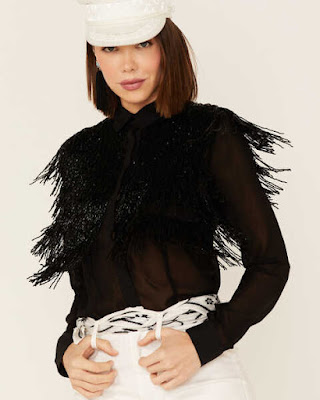 I have been on the search for shirts like the first one above, but have found nothing.  Yes there are a few you can order on-line, but what a hassle.  They never seem to fit.  You would think that in a western town like Tucson .. or even Tombstone .. you would find SOMETHING.  All I have come across so far is stuff so thin and cheap you can see through it.  No self-respecting cowgirl would wear this thing from Boot Barn, most likely made in China. 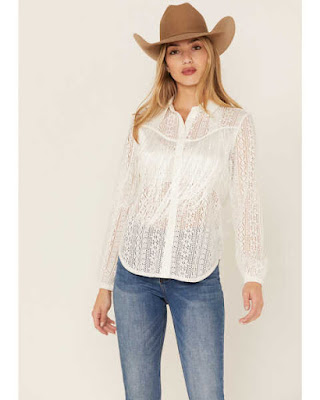 When I saw this, I almost spit out my coffee.  Yup ... this says I'm going to go catch up my horse, throw on a saddle and go for a ride in the mountains.  I'm pretty sure any horse wouldn't even let you get close. 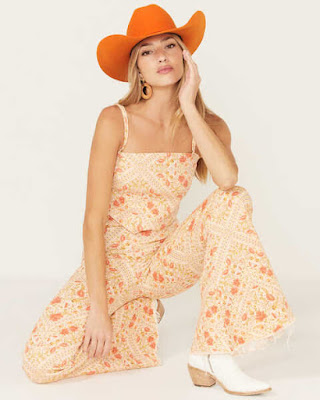 Since I was going to Green Valley to pick up a couple small pieces of fabric, I decided to look up clothing stores to see if I could find something to wear.  I have a closet full of long sleeve stuff, which doesn't exactly work with 90 degree weather.
Dazees popped up .. let's check it out.  Of course you never know until you arrive if it's actually a REAL store or a Thrift Store.  This turned out to be the latter.  I admit, I rarely (if ever) purchase used clothing, but when I saw the 50% off everything sign, I decided to at least look.
Surprisingly, I found four shirts that actually fit.  Not exactly cowboy-ish, but at this point, I can't be choosy.  They are REAL shirts, made of REAL fabric and they fit.  I paid $12.00 for the entire lot.  When I found out why Dazees is there, I decided I just might go back.
This store is run by volunteers.  All the proceeds go to Hands of a Friend, that supports women and children who have been subject to domestic violence, sexual assault, human trafficking and elder abuse.  Yup I can do that ... even if they aren't WESTERN clothes. 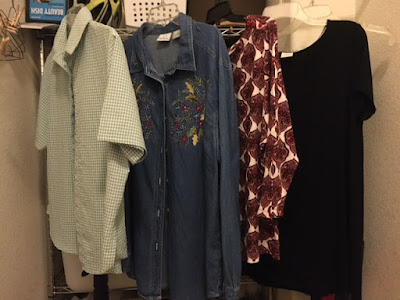 I guess if I want to find anything comparable to the "old" days, I'll have to go to Texas.  I can't even find a western clothing store around here.
The game camera only picked up a few coyotes doing a drive by.  It seems a new pack has taken over the territory, since I never see the dark-backed ones any more.  I'll post that tomorrow. 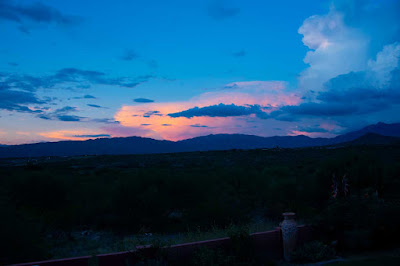 There was a nice but low key sunset to end the day.  I'll be back on the ladder gutter cleaning this morning.  SO much fun.  It appears it is half full of sand and gravel.  Apparently those big winds we have deposit stuff on the roof which gets washed down by the rain.  Gutter covers won't help ... the sand goes right through them.  Maybe I should have looked at this sooner!!

Posted by Nancy Kissack at 6:16 AM