It's been an interesting year for monsoon.  Mother Nature seems to be hanging on for dear life.  We've got four days of thunderstorms lined up.  Of course you never know if the weather guessers are right, but in Arizona, you can have beautiful sunny blue skies one minute, and lightning in your lap, along with a waterfall, two seconds later.

Lucky for me, it didn't happen while I was out painting.  Here's my tip of the day.  Once you have completed your painting, you don't have to clean that brush if you think you will use it again with the same color paint.  I wrapped the brush very tightly in aluminum foil and placed it in the freezer.  That was two years ago.

I took the brush out and let it thaw, just to see if this would actually work.  Sure enough, it thawed out nicely, I wiped it clean and went right back to painting.  I probably wouldn't try this on your living room paint, but you never know.

I would also like to mention that this can of paint has been in the searingly hot garage for at least five years.  I just stirred it up and VOILA!!  Paint!!  Here's the thing  ... apparently the previous owners decided to paint the wall AFTER the plants had grown tall, so they never painted BEHIND them.

Yes I did take the chain saw on a stick to this oleander, and it's a mess.  I'll clean it up and try to make it look better. 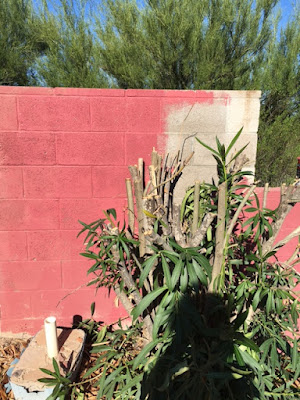 My plan was to paint badly.  I know you should try to do a nice neat job, but I was determined to make it look as good, or as bad really, as the rest of the fence and not have to buy another can of paint.  Apparently I did a pretty good job of messing it up because you almost cannot tell where I painted.  Yes, cleanup is in order .... maybe today. 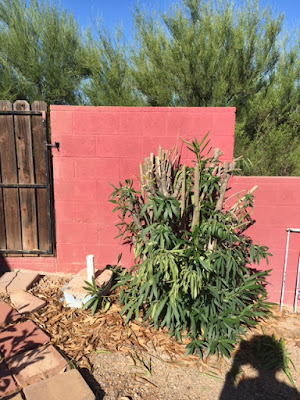 The second wall didn't go quite as well (it's not dry yet), but it's a lot better than it was.  Those stumps are the oleanders I demolished because they were mucking up my septic tank.  Let me tell you, they mean NOTHING when you have to pay $2,000 for a repair.  I was done just as the heat began to rise. 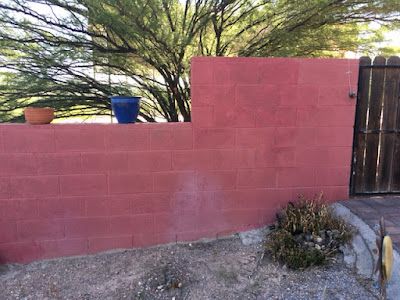 Suddenly there were storm clouds overhead.  I was hoping the paint dried before the rain came.  After retrieving a package of baby back ribs from the Chance house (Dan braved the Costco crowds and picked them up for me), it was less than 15 minutes before the downpour hit.  I don't think you can hear the crack of lightning and thunder very well from my phone, but here's what it looked like.

I ran outside to video that first crack of lightning.  WOW ... I was back inside in two seconds.  That lightning was right overhead.  The crack even hurt my ears.  Me thinks I should stay inside where it's safe.  I took this video standing in the doorway.  It was so bad that even Cooper began barking at the thunder.

Thirty minutes later and look here!!!  The storm passed over and this beautiful rainbow appeared.  You can tell it's still raining over there, but not here. 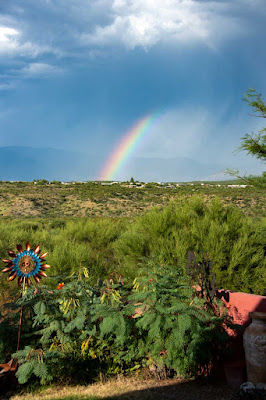 The best part ... the sweet clean air of the desert to breathe, usually followed up by Mother Nature's best sunset.  It's always breathtaking ... every single time. 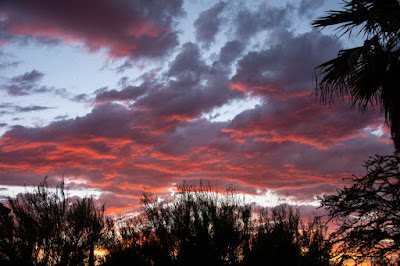 I spent an hour cutting up that nice roasted Costco chicken that came with the ribs.  Cooper can smell that stuff a mile away.  It's his all-time favorite.  No he doesn't get the whole thing, just pieces chopped up with his dog food.  Dinner put him right to sleep.  His favorite toy of the day is never far. 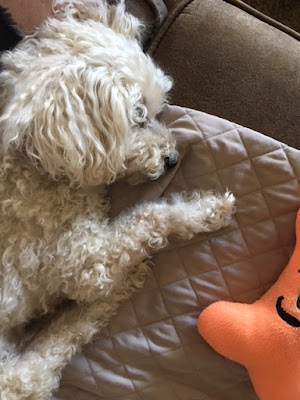 Everything needs to be done in the mornings while it's cool, so I'll be back at it shortly.  But first ... lets check the game camera!!  Last time there was a coyote drive by ... nothing to write home about.  Maybe today Mr. Bobcat will return.
Posted by Nancy Kissack at 6:21 AM