Greetings on this Tuesday morning from sunny wind blown Arizona.  It's not near as windy as in Havana Cuba right now.  The hurricane shaped up overnight and is heading right over Florida.  I'm pretty sure I'm happy to put up with the bugs in Arizona versus the hurricanes in Florida.

Take this wall for example.  It's a nice looking wall, right?  It's even nicer since I smacked that 2" spider with my handy dandy fly swatter and unceremoniously dumped him into the garbage can.  I was actually trying to take a picture of the spider, but apparently I was shaking too much and missed him altogether.  No worries ... the rainbow bridge now has a new resident. 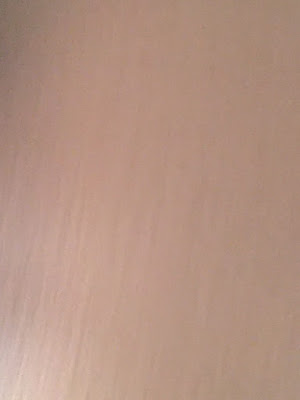 I'm feeling much better today since this time I chose to sleep in the guest bedroom, after having sprayed it down of course.  I even used some OFF spray on myself .. just to be sure.  I'm not kidding, these bites are big and itchy.  The worst part is I have no idea what did it.
I was sleeping nicely when a coyote let out a screaming howl right outside the window, meaning he was on my front walkway.  His buddies returned his call and he was gone in a flash.  I was left wide eyed.

While surveying the property yesterday morning, I spotted this new dirt pile.  Wow ... someone was a busy beaver overnight.  All those rocks were covering most of this.  I gingerly lifted them up to find a big nasty green scorpion.  He was none too happy I bothered his sleep.  Yup ... rainbow bridge!!

When I stepped on the dirt, I quickly fell through into a big hole.  Yikes!!  Okay whoever dug this ... you are in deep sh___!  I smashed all the holes .. there were three ... and filled them in with dirt.  I'm guessing rats were digging under the house.  We do have tiny munchkin squirrel like things ... but I don't think they dig holes this big.   I set up the game camera to see if I could catch anyone on video.  Nope ... nothing. 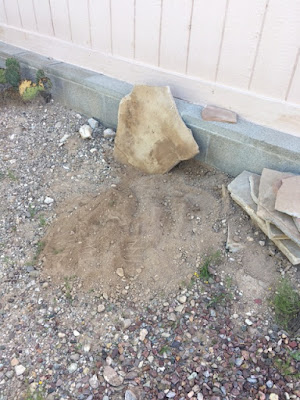 To combat the uneasiness of biting things, I spent over two hours on the computer trying to get my bank accounts straightened out.  My main bank changed systems, deleting all of my automatic transfers and deposits.  They also told me the last ten payments I made were not going to go through.  Oh great ... now I'll have late payments.  What a mess that turned out to be.
In the end, after paying all of them again, I discovered they DID go through after all.  My creditors will be happy ... they got double payments before I could delete them.  It's always something with the banks, right?
Lunch was quick and efficient ... a BLT taco.  No kidding, this is a GREAT and fast lunch.  I spend about 20 minutes cooking up an entire flat of bacon in the air fryer and stick it in the fridge.  A low carb tortilla, tomatoes, lettuce and lunch is served!! 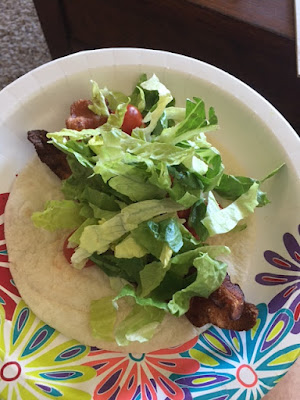 Followed up of course by M & M peanut butter.  Okay, aren't these supposed to be all colors?  Someone must have made too many orange and blue, so they dumped them into one bag!!  Sunny yellow is my favorite and I got ONE!! 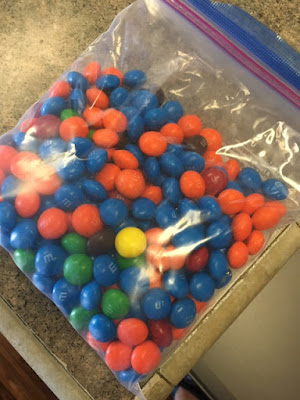 I spent most of the day cringing every time I felt something on my legs or feet.  Nothing was there but a few twingy nerves and probably this quilt as I finished sewing up the binding by hand.  Two more are waiting in the wings, so I decided I better get busy. 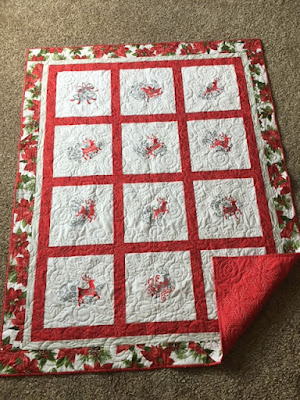 I embroidered all the squares of this quilt with my other embroidery machine.  Boy do I love that thing, but I don't seem to use it often enough.  Thanks to Cindy for giving me instructions on how to do it AND the pattern. 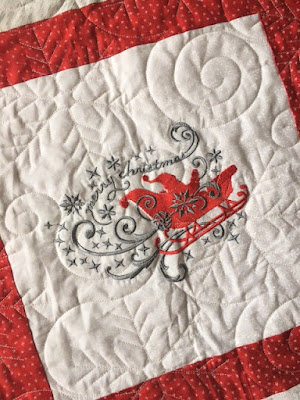 What better way to end the day than perusing the proliferous pinching things on my back screen door.  At least the praying mantis don't bite humans, but he did bite (and eat) that lovely insect. 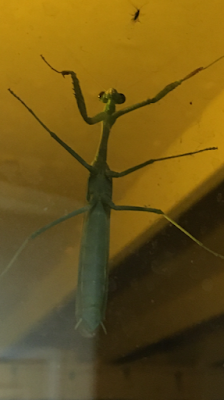 Yes there are a LOT of them around.  I've counted up to five on my screen door at any one time.  These of course are the females because they are really big.  Apparently it's breeding season.  The males are much smaller, losing their heads for love.  No really, the female eats their head.  Still, they don't bite or sting me, so I'm fine with them. 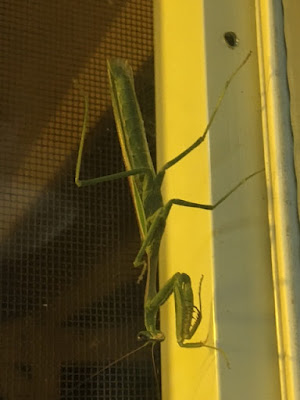 I was rather fascinated when I saw something big flying by the screen door.  My first thought was bat?  Come to find out, these guys have big beautiful wings.  Who knew?  I thought they just crawled around, but apparently not. 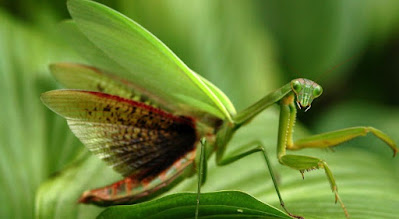 Not that I'm counting, but as of now I've got seven bites.  I think I made them mad after the first spraying of the room, so they came back with a vengeance.  We braved the guest bedroom and all went well.  No new bites ... so the guest bedroom it will be!!
I'm keeping a sharp eye on the hurricane in Florida.  I have friends there on both sides of the state that are on watch for possible evacuation.  It appears to be heading for both of them.  Yup there are lots of bugs in Arizona at the moment, but I'll take them over hurricanes any day.  Prayers it veers off and misses most of Florida.