I'm not sure why we call them no see-ums because I saw them just fine at the shooting range Saturday.  As the weather heats up and the grass dries to crunchiness, the little black gnats come out in force.  I know that's how it is ... so I went prepared with sunscreen and OFF.  I didn't use enough of either.   Although I did smell rather peculiar from both, it wasn't enough to keep them away.  Maybe THAT was the attraction.

I've since discovered those familiar itchy bumps on my neck, elbows and knees that will drive you crazy .... or maybe crazier!!  In the old days we had calamine lotion ... now we have Tea Tree Oil.  Works like a charm, as does prednisone if you happen to have a tiny bit left from a prescription.

I spent most of Memorial Day wondering what to do.  In my book, there's nothing worse than just sitting.  I get bored quickly and start texting everyone I know!!  With the temperatures expected to be in the hundreds all week, I decided to turn off and unplug everything I possibly could to allow for my vacuum-like air conditioners, sucking up electricity like the dust bunnies under my bed.  Between that and the sprinklers, just trying to keep the grass alive, my electric bill will be through the roof!!  Thursday ... 105 degrees.

I knew everyone would be barbecuing for the holiday, so I decided to try out the recipe for ribs I got from one of the Chefs at the Elks Lodge.  This one is SO simple.  Season liberally with your favorite spice ... I think they use Pappy's, but I tried some Carolina rub I picked up back East.  After sitting for at least 30 minutes, throw them on the barbecue for ten minutes per side, just to get some smoky flavor and a little brown.

Next up, wrap them in heavy foil and put them in a 200 degree oven for 4-5 hours, until they reach 170 degrees.  Good thing I checked them a little early ... four hours and they were done to perfect tenderness.  I can't believe I didn't eat the whole thing!!  These ribs were even better than those I cooked in the smoker!! 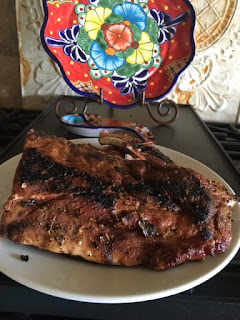 I threw together a large salad to eat first, hoping I wouldn't overindulge in ribs.  It worked!!  I actually have enough for TWO more meals.  YUM YUM!!!!!  Notice I used the good china. 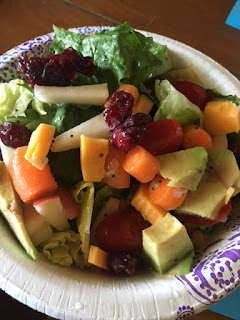 In support of a friend from my old office, I watched the Stanley Cup Finals last night.  That's ice hockey ... another BIG sporting event this weekend.  I immediately remembered why I'm NOT a hockey fan.  The noise alone is so deafening and irritating ... and I had turned the sound down!!  Half the time I couldn't even tell where the puck was.  They kept saying "they missed that shot" ... heck, I couldn't even tell there WAS a shot!!

All the hullabaloo is about the San Jose Sharks ... this is the first time in franchise history they have MADE it to the finals, so I figured I would hang in there until the finish of the first game.  The second they lost, I changed the channel.  At least I can say I watched!!  Aren't there six more games??

Cooper and I spent the rest of the night watching creature features ... B-grade chiller-thrillers with bad acting and even worse story lines.  You know, the ones where the kids in the forest have a choice between the running car or the cabin with the scary monster ... and they always chose the cabin??? 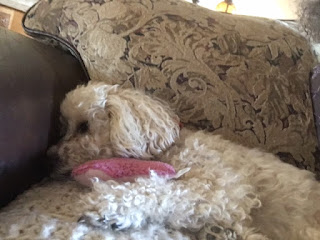 Since I began this blog, I've discovered three more bites ... wrist, knuckle and under my watch??  There're going to love me at the Magic Kingdom of Bingo tonight when they smell my newest fragrance,  tea tree oil!!