I guess it all caught up with me yesterday!!  There were too many 4:30 mornings followed by a couple of VERY late evenings.  You know how it is, you're watching your favorite show and you just HAVE to see how it ends, not to mention a couple of baseball games.

I hit the rowing machine early, which gave me enough energy to clean out two more closets and vacuum the entire house before plopping on the couch.  I was a little shocked to see it was only 9:00 am, as Jessie snuggled on the chair. 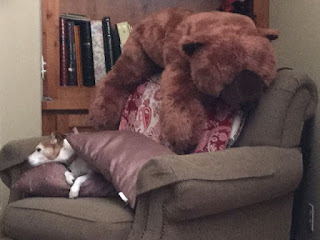 It took all my strength to get myself together and run pick up my mail.  I'm still waiting for those DMV stickers for my Jeep and truck.  Thanks to my Elks friends, I discovered Prime Shine car wash and took advantage of a free wash for my truck.  I'm VERY surprised to say that for $7.00 they probably did a better job than I would have.  A quick grocery stop and I was headed back home. 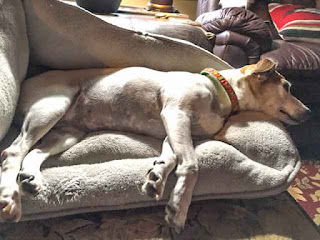 I did a few things here and there before deciding to sit on the couch and watch TV for a bit.  Next thing I know it's like 6:00.  YIKES!!!  The amazing part is that not only did "I" sleep a couple of hours (unheard of during the day for me), but so did the puppies!!  In fact, I had the distinct pleasure of waking THEM up!!! 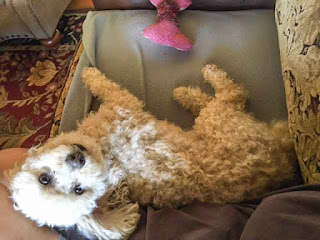 By then, I was starving, having missed lunch.  I grabbed some rosemary from my yard and tied up a small pork loin, adding some zucchini, all of which I figured to barbecue.  With the grill heating up nicely, I threw on the pork and waited ..... not so patiently.  Fifteen minutes later, it looked just about like it did when I put it on!!  I was OUT of fuel.  Rats .... DOUBLE RATS!!! 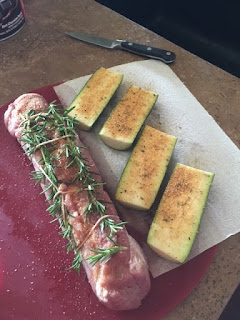 With no backup propane, I tossed it into a frying pan and threw it in the oven, which of course took some time to heat up.  In the end it was a little tough, but edible, as was the squash after I nuked it for a few minutes.

Today I'm going to stock up on Lean Cuisine!!