Little did I know what a stressful day it would be yesterday as I became Head Chef in the Elks kitchen.  That's sure a step up, right?  A very large step off a tall CLIFF!!

Up at 4:30 in order to feed the dogs and make myself as presentable as possible at 6:00 in the morning, I was tired before I even started!!  Arriving at the kitchen, I met the leader of this Mothers Day shindig, who immediately put me to work making Mexican Egg Casseroles in those big pans that fit in buffet line warmers.  Eggs, salsa, the taco/hamburger meat I cooked and jalapeños.  They went in the walk-in to keep cool.

As soon as the ovens heated up, top one 300 degrees, bottom 400, he explained what went in which oven.  No need to explain to me I said ... I'm not cooking.  Where's the Chef-guy??  Long story short, apparently Chef-guy wasn't coming in.

That was NOT news I wanted to hear, but Bingo Bob was in the kitchen helping, and he's done this many times before.  I breathed a sigh of relief, which immediately felt like I got punched in the stomach.  Bob left me alone to go set up his waffle table.  Wait ..... how long do you cook the biscuits??

Just stir the eggs every ten minutes or so and get those sausages in the oven.  YIKES!!!  Pretty soon I was tossing around baking pans the size of an aircraft carrier deck, cooking sausages and biscuits.  Then someone mentioned the ham.  WHAT HAM???   The two huge pans in the walk-in that need to be broken down into smaller pans and baked ... and get the hash browns.  HASH BROWNS??  By now, people are lining up outside and I'm a wreck!! 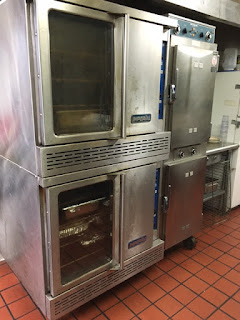 As the Mexican casserole looked done, I moved it to the warming ovens.   When the buffet was ready, I smothered it in cheese and more jalapeños before sending it to the front.  Only 5 more pans to cook.   The biscuits were easy ... line up 80-90 on a pan and warm them up.  I meant to check the label on the box these came in ... they were fluffy and delicious, just like homemade!!

Throwing around all those huge heavy pans reminded me of muscles I haven't used in years!!  Here's the final tally .....  6 casseroles, 10 pans of hash browns, 8 sheets of sausages, 8 pans of ham, 10 sheets of biscuits and 8 sheets of waffles, all cooked by yours truly!! 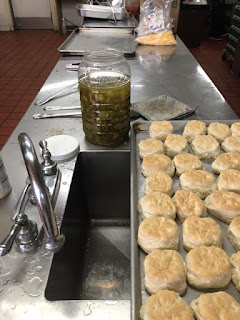 I had those four ovens full and spitting out breakfast for four hours.  The biggest shock of all was that I didn't burn a single biscuit!!   These are the scrambled egg and sausage gravy guys!!  If I ever thought I might want to be a chef, this experience squashed that FLAT!! 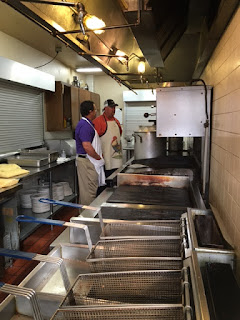 It all worked out in the end, though I was pretty exhausted by 12:30.  About that time it dawned on me that no one mentioned seasoning anything.  After finally getting a taste of the hash browns, they definitely could have used SOMETHING!!  I'll remember that in case the REAL Chef decides to stay home next year too!!

The worst part ..... I woke up several times with achy muscles and finally decided to take an advil.  Lo and behold ... there was NONE!!!  Oh NO!!!  How did THAT happen???  I grabbed my keys and wandered in the darkness to the motorhome.  I considered just falling onto the bed there for the night, but needed water for the advil.  Funny, I smell sausages with a hint of sweet waffles!

I really need to get my act together today.  I'm hoping for a quick recovery since tonight is Purple Cow night!!  Yup ..... PURPLE!!!