I've been to many zoos in my life, but the two I visited recently were of a different color.  The first was the Bingo Committee meeting with twelve men and little old me.  I picked up pizza for everyone which we scarfed down in a flash.  Honestly, that's the only reason all those men showed up, I think. Feed them, they will come!

As soon as mouths were empty, the arguments began.   What a ZOO that turned out to be!  Three people wanted a new game, three people said it wouldn't work .. "we tried that ten years ago" ... and the rest of us sat quietly watching the war.  There was lots of arm waving and excuses, but in the end ... hey, just give it a shot!!  The meeting was over ... except they forgot to discuss the real problem ... checks and balances of money handling.  Whew ... I was glad to make it out of that zoo alive!!

It was a quieter zoo I visited yesterday.  There were horses, elephants, giraffes, kitties and bunnies.  For those who asked, I've no idea what this is called, but here's how it works.  The pattern is from Fiberworks, but we did not follow the directions in the packet.  We used fusible backed paper you can see through to trace part of the pattern, or around a flower.  Cut it out OUTSIDE the tracing lines and iron on to the BACK of fabric.

Using fabric scissors (they fuse the edges as you cut), cut it out, peel off the paper and lay it on a piece of silicon fusing mat laid over your big pattern.  You overlap the pieces and gently touch them with an iron, sticking them all together, peeling the design off and moving the silicon up until complete.  Peel it off the final time and place on your backing fabric.  Iron again lightly.  Add embellishments as you wish, and voila ... you have the front of a quilt.  Add batting, backing and quilt with a fairly tight pattern to make sure all your pieces stay attached.  I'm not sure this is washable ... I forgot to ask. 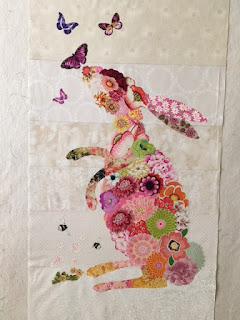 I started the giraffe, but ran into a little trouble, since I didn't really want it to be the same color as the bunny.  Nothing is set in stone here, so I may rip it apart and start again. 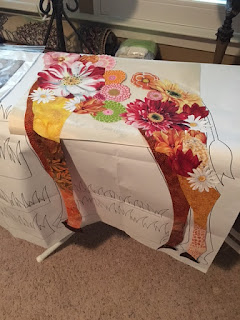 Of course it's always a zoo at my house with two dogs and a parrot, not to mention their crazy mom.  Just to up the ante, I'm going shooting today, trying to get in a little practice before spending all day tomorrow in the sun with swarming mosquitos at the gun range.  Doesn't that sound like fun??