I think I've probably told you about my ribbon winning experience.  It pretty much doesn't exist.  When I was a kid on the ranch, my brother who was enrolled in FFA got not one, but TWO big steers for the County Fair.  I was enrolled in 4-H.  I got a motherless calf ... a heifer no less ... that needed to be bottle fed.

I worked with her every day, fed her until she had a beautiful female shape and trotted off to the fairgrounds.  The very first day upon weigh-in, she ran away with me and had to be corralled by the fair crew.  That was devastating enough, but then show day arrived.  There were only TWO of us in my class and I got THIRD place.  He said I should have been showing a STEER, not a heifer.  My brother got Champion and Reserved Champion.  I cried and never entered any competitions again.

Here we are 50 years later and my friend from Sacramento wanted me to enter a quilt in the Dixon May Fair (just outside Sacramento).  I really didn't think that was a very good idea, but she insisted.  The only one I had at the time was my Alaska quilt.  If you make a quilt for a show, you really should know ahead of time, because there are criteria they judge by.  Don't ask me what, since I have no idea.  At least you should try to be very accurate in your seams and corners.  This was one I just threw together!! 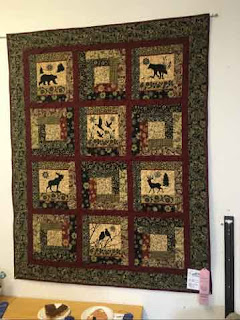 Imagine my shock and surprise when she sent these pictures saying I won a ribbon.  Fourth Place!!  Darn ... I've gone DOWN in the ribbon world, but was really thrilled to see a ribbon at all.  I figured I would be lucky if I got an "entry" ribbon.  So how cool is THIS?????  Winner winner chicken dinner, even if they did spell my name wrong!! 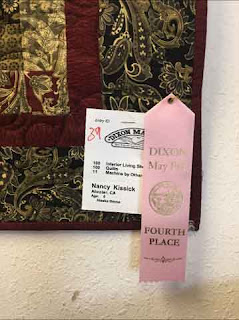 I REALLY felt good when I saw the competition I was up against.  Can you believe this Best of Show in my class?  All the little squares are only one half inch wide!!  Maybe next year I'll actually make a quilt just for the fair!! 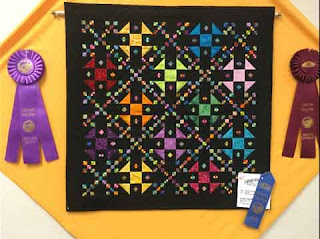 Because I forgot this image yesterday, here's the three of us with our triplet purple cows.  That's Diane on the left (we worked together at the County for eleven years) and her friend Tammy.  I can't wait to scout out another class like this, with or without the wine, and do a little more painting. 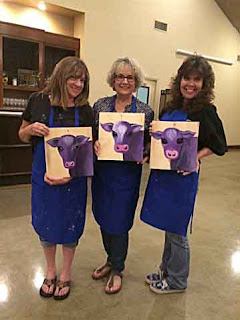 I spent most of yesterday morning driving around the neighborhood.  Early in the morning, my dogs began barking like someone was breaking in.  Come to find out, the two golden labs next door had escaped.  Delilah and Captain were off like a shot.  I only saw tails as they rounded the corner.

A quick call to the neighbor and we both took off in our vehicles looking for them, with no success.  An hour later, I came back, thinking someone must have picked them up.  About ten minutes after that, they were discovered three miles away and captured by some nice people who held them in jail until neighbor Kim bailed them out.  Now THAT was a WIN!!

From there it was on to the Magic Kingdom of Elks Bingo.  What a snarky crowd!!   I was sure it was a full moon, but alas .... just a bunch of grumpy women .... and one man!!  Some how we got out at 9:30 with the skin on our backs still intact.  I'm pretty sure that's because we upped the ante and paid $250 for each winning game.

In spite of the crowd, the King, the Lawyer, the Accountant, the Court Jester, Prince Charming and the Castle Knights had a GREAT time kidding around.  That's a WIN in my book, and sometimes payment enough!!