They Never Return Your Calls .....

Did I mention I have a recall on my Phaeton for the step that goes in and out when you want to enter?  Apparently they used two different types of steps, mine of course being the one that is recalled to install some kind of bracket.

Since I'll be in Sacramento in June, I called La Mesa in Davis three weeks ago to get the recall problem fixed.  JR was happy to help me, but it took him two days to verify the recall before checking back with me.  The parts will be ordered ... we'll call you when they come in and confirm your appointment.  No one called.

I wasn't surprised.  Yesterday I called THEM, got cut off, transferred and cut off again before finally reaching the parts department who confirmed my repair kit was in .... last week.  Nope, no one called.  After a couple more tries, I finally left a message for JR because he wasn't answering his phone, that I wanted my appointment to be on the date we talked about.

Three hours later I finally got a call, with JR saying he thought we already made that appointment.  Funny, neither the Service Department secretary nor the Parts Department could find it.  The appointment was finally made.  It's supposed to be a one hour repair, but he mentioned in passing that I should expect at least a three hour wait.  As an accountant, that doesn't quite compute for me.

Later, when my Bingo buddy Mark called, saying he had talked his lovely wife into shooting for the first time, I was thrilled he asked me along.  He was thrilled his wife was going because "I" was going and I really needed to shoot my new Ruger before today.  We were three happy campers!! 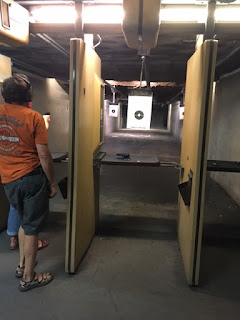 After the first five shots, I was shaking so bad I had to put the gun down.  Every time someone shot, I jumped two inches off the floor.  I'm NOT exaggerating.  Even with ear protection, it was LOUD!!  Finally, I got my nerve up to continue ... this target being 20 rounds later.  I was imagining that piece of paper was JR.  Okay, not really.   I finally calmed down enough to finish off 50 rounds.  I have a feeling I'll be so sore today I won't be able to hit the broad side of a barn. 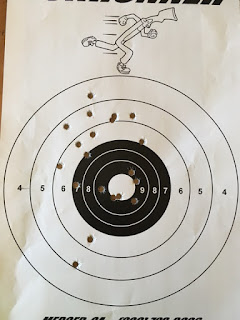 To relax, I figured to try another round of cupcakes.  Surely they won't be as disastrous as the last batch.  Turns out they were fine ... the most tender, delicate ones I've baked.  Yup, it's a box mix, with butter instead of oil and milk instead of water.  THESE I can deal with.  I did have one thought of throwing them up in the air like Annie Oakley, but it was fleeting at best. 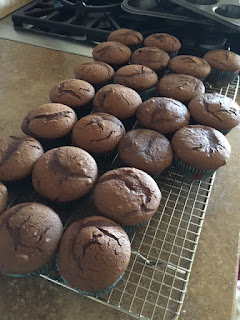 Frosted with more chocolate and sprinkled with mini chips, it was a chocolatey delight that immediately sent my stomach into knots.  I guess they will go to the Bingo crew Tuesday night. 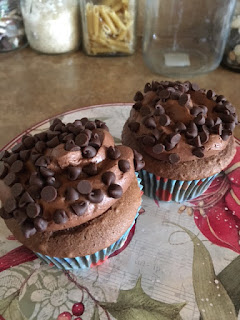 It's a really early morning again ... CCW class time .... wish me luck at the shooting range!!