Summer began with a bang yesterday.  I shouldn't have mentioned what great weather we were having.  At 9:00 in the morning it was 80 degrees, humid, overcast, muggy and HOT.  It doesn't look like today will be much different.

I spent most of the day working on the latest lap quilt, only to discover a rather large design flaw in the layout.  I double and triple checked the pattern ... yup, I had sewed it together correctly, just like the picture.  Operative word .... SEWED ... meaning I'm not taking this puppy apart.  It will just be a SQUARE lap quilt instead of an OBLONG one!!  No one will notice!!

When lunch time rolled around, I had chicken in the fridge that needed to be cooked, so I took time out to make chicken marsala.  This is a super easy recipe even I can make.  Season and fry chicken, take out of the pan, add butter and mushrooms.  When almost cooked, add 1/3 cup sherry and 1/2 cup marsala wine.  Put chicken back in and simmer.  If I was smart, I would have boxed some up for dinner at the Magic Kingdom. 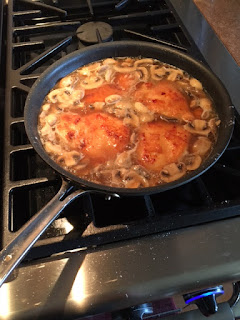 My brain was still stuck on the quilt I think, as I wandered off to the Elks lodge about 3:00.  At least I remembered to take the cupcakes with me.  They were a hit ... and gone in 30 seconds!!

It being the first Tuesday of the month, we figured to be crazy busy ... and we were!!  Everyone came in with their wads of cash rolled into bundles and bought more cards than normal.  Before I knew it, my stomach was growling up a storm.  I'll have chili cheese fries.  The Castle Lawyer went to order for us.

Where in the world did THAT come from?  Chili cheese fries ... no one orders chili cheese fries!!  I suppose it just jumped into my head that since the hotdogs and hamburgers make my stomach hurt, I'd try something different.  Didn't I try this once before?

What a disappointment, kind of like the quilt!!  A huge soggy mass of undercooked french fries, covered in a disgusting mass of something brown, sprinkled with a little cheese.  They should have doubled the cheese.  It was the only redeeming factor.  No wonder no one orders chili cheese fries.

The amazing part is my stomach was okay, but I woke up four times because my hips and shoulders were aching.  Time to pull the second queen mattress set out of the closet for a trial run and donate this one.  As I wandered around the house in a haze, I kept hearing a beep.  It MUST be the chili cheese fries talking to me.   It took twenty minutes to figure out it wasn't the smoke alarms, it was my house alarm.

I pushed all the buttons trying to discover WHY, when the phone rang.  Uh oh!!  Apparently there is a Health Issue button.  Who knew??  At least now if I'm having a heart attack, I'll know how to get help, which almost happened when they asked me the passcode.  It's 4:30 in the morning and I haven't had my coffee yet.  It took three tries!!

Come to find out, the alarm system lost the day and date.  I have no idea how to fix its memory since I'm not that good at fixing MINE, but I'll give it a shot ..... after a couple cups of java!!

Posted by Nancy Kissack at 7:10 AM