Where's the beef????   It's in the bag my friends, it's in the bag!!  Needless to say, the Elks guys don't know about my illustrious cooking record ..... YET!!  First thing they gave me was 12 pounds of ground beef and said  brown it up.  Using a frying pan the size of which I'd never seen before, I set to cooking the taco/hamburger meat for the Mexican egg casserole.  I could barely lift the pan using both hands when it was empty, so the MEN had to come dump it into the big pan for me.  When done, I divided it up into six bags, ready to make the casserole this morning. 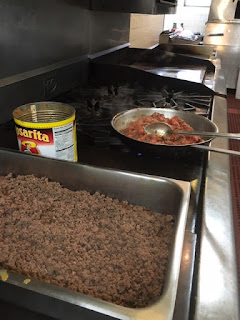 In between all THIS cooking, we whipped up 15 racks of ribs, four huge pork loins and a ginormous seven layer dip as a going away party for one of the bartenders upstairs.  She's moving to Jordan.  Not quite the beachy ocean location I would be looking for, but we all wished her well.

I layered muffins and danish on five pans about two feet across before adding juice to six gallons worth of cups we filled with fruit.  Then it was back to the RV-wheel-size frying pan for sausage cooking.  They don't mess around here ... this was for homemade sausage gravy to top some beautiful biscuits.

Next it was boxes and boxes of link sausage, placed on huge cookie sheets for quick cooking in the ovens this morning, as well as prepping for the biscuits.

Those flames down at the end were NOT from me, because I KNEW you were going to ask.  I was nowhere near that end of the kitchen!!  I think someone was cooking chicken just a tad too much! 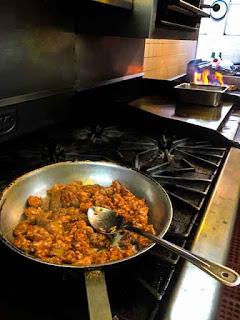 With everything finally together and stashed in the walk-in, I headed home, just in time for the rain.  In no time at all, I was just like Jessie, snoozing on the couch, waking up occasionally to check the score of the Giants game.  What a game it was before we finally won!!! 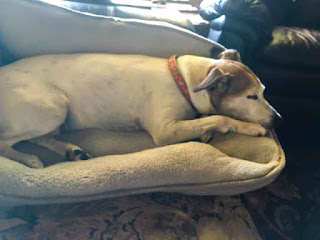 This morning was even earlier than yesterday (ugh 4:30 am), with casserole prep beginning at 6:00.  I'm a morning person, but even though I'm up, I don't WAKE up until 9:00 or so.  Asking me to whip up casseroles this early in the morning might be a mistake!!

To all the mothers out there .... I hope you have a WONDERFUL and HAPPY MOTHERS DAY!!