Is it just because one more year has been tacked on to my body?  The mornings are becoming more and more uncomfortable.  The best part is that I've been the same age for two years now ... I miscounted last year, so I'm feeling pretty good about THAT!

The problem is I'm beginning to feel like I was struck by lightning every morning around 4:00.  That's when I wake up because everything hurts.  My hips, my knees, my shoulders, my wrists ... tossing and turning doesn't help, so I finally get up.  Cooper is thrilled, since he gets a lift off the bed to chase down his ball for an hour's playtime.  In the meantime, I'm heading for the advil.  UGH!!

I took this neat lightning picture two years ago yesterday in Tucumcari New Mexico as I sat cowering in my rig, calling the Westerfields every five minutes and praying there wouldn't be a tornado.  I thought maybe we made a wrong turn and were in Kansas!! 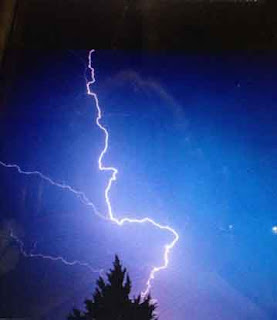 It was a nice day yesterday ... I did absolutely nothing to write home about.  Oh wait ... I did get on the rowing machine for 30 minutes.  Maybe that's why I'm so stove up this morning!!  I thought about making cupcakes, but it was a fleeting thought at best.

By noon I figured it was late enough for dessert ... kind of like it's 5:00 somewhere ... so I downed a Nestle's drumstick, savoring every bite!!  There's nothing like ice cream to make a body better! 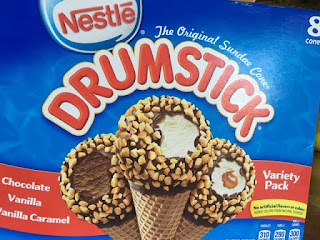 I finally trotted off to the Magic Kingdom of Elks Bingo for my free birthday drink ... a large coca cola please!!  I get a lot of static about that, but if I had a "real" drink, I wouldn't be able to ring up the cash register.  One of our two new girls showed up and since it was a slow night ... last day of the month and everyone's out of money ... I let her work the infernal machine.

There were a couple of miskeyed entries when it came to payoffs.  The machine took immediately advantage of that, sucking up $200 into oblivion ... so we didn't balance.  I'm sure it was operator error, but I didn't want to spend three hours figuring it out.  My bed was calling, as it will be again around 3:00 this afternoon!!

A couple of appointments today will end in a Bingo meeting, and since I have to drive right by Costco, I'm stuck with the title of pizza delivery lady.  It's the only way you can get people to come to the meeting ... feed them.  Cake would work better, but that's just my opinion!!

I'm going to go lay on the couch now with a couple of magic pain killer pills ... peanut butter flavor!!