When Miss Patty Chance and I were in Tucson last winter, we ran into two ladies carrying pictures that were just alike.  When I asked about it, seems there was some kind of painting class where everyone paints the same thing.

When I found out they were actually doing that right here in River City, my girlfriends and I signed up, mostly because here in California, they do it up right!!  Mimosa's and all the wine you can drink!!  See that purple cow in the distance??  THAT'S what we are going to paint!  Good luck with that, I thought!  I'm not sure wine and paint mix well!! 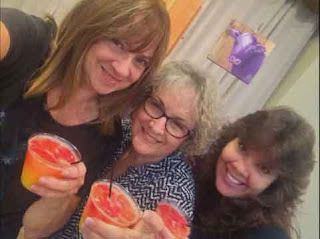 All ready to go with acrylic paint, brushes, easels and for this project, a block of wood.  Originally the idea was to use old fencing, but apparently it was TOO old.  She walked us through step by step to create our masterpiece (cough, choke!! ).  Sorry, but if you saw the end results, you too would chuckle!!  First up, draw an outline in chalk!  Notice the already empty bottle of wine on the table. 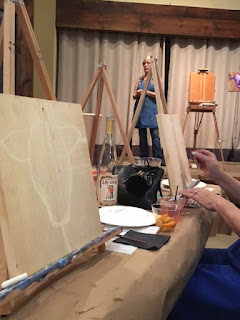 Second, fill it in with purple.  By this time we all had something pretty alien looking.  We decided it was the eyes and the airplane-wing ears.  I of course used too much paint, since the wood grain SHOULD have been showing through.  Have another glass of wine ... it will be fine!! 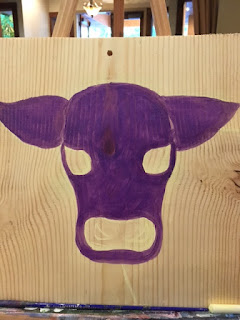 Before long, Diane was on her SECOND bottle!!  Did I mention that this class is being held at a winery just outside of town? 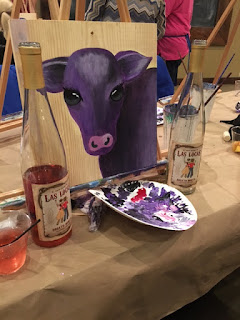 Everyone was getting a kick out of their alien bug-eyes.  It took awhile to get the hang of it ... three glasses of wine I think it was.  Pretty soon, I lost track completely!!  After explaining what to do, the instructor turned on some great country music so we could all rock out while she gave individual tips.  By now, we were really getting in the groove!!  Especially me because you KNOW, I don't drink!! 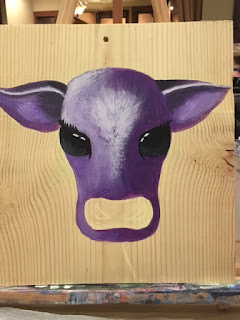 Needless to say, there were LOTS of different purple cows in the end.  Some looked like the example and some looked ..... well ALIEN is the best way to put it.  I saw one that was a white cow with black spots.  She must have gulped down THREE bottles of wine.  Then she left it ... didn't even want to take her painting home.  It really was good ... a true to life cow.  Kind of insulting that she left it on the table I thought, but then maybe I had too many glasses of wine!! 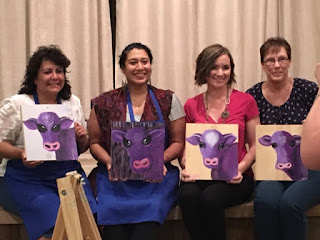 So here's my PURPLE COW!!  Pretty simple cartoon-like, but this was so much fun I want to do it again.  At the end of the month they are painting a great American Flag picture and a seashore landscape that I wish I could try, but alas, I will be heading down the road by that time!! 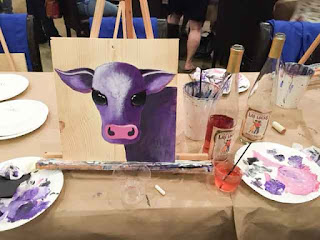 In case you were wondering, it's $37 for the class and a couple of drinks.  We purchased the bottles of wine because it was cheaper than $6 a glass.  Everything is included, along with aprons so you don't ruin your clothes.  Don't worry about that paint on the floor, I understand it can be scraped off.  By the way, her name is Lavender!!