Guess Who's Coming To Dinner!!

Kissack Kastle RV Park is now FULL!   I received a message from RV friend Gretchen Mattison this morning that she was passing through town and wanted to stop at the Castle AFB Museum.  She asked about the best accommodations ... Castle RV Park or the Elks Park.  My response was MY HOUSE!!  It has personal service, a built-in alarm clock that barks like a dog and free shuttle service to the nearest restaurant.

She backed in like a pro on the first try and hooked up to my 50 amp service.  Seems she's heading North to Alaska.  Lucky for her, the winds came up last night and blew most of the bad smell further south. 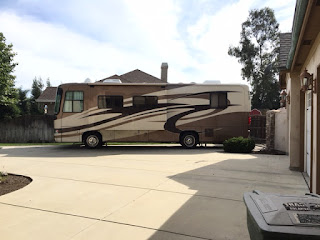 Of course you KNOW who got all the attention.  Meet Bella ... a beauty of a standard poodle.  This girl has the best attitude ... what a sweetheart.  I makes me wonder what happened to Cooper.  Don't answer that question, I know it's probably ME. 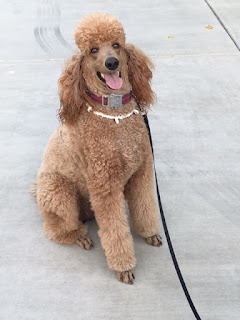 Since you are familiar with my cooking reputation, you also know I wasn't going to chance cooking for company, and really (yes really) I had just cleaned out my fridge of everything but water, butter and ketchup.  Alright, I could have offered peanut butter and jelly sandwiches, but I saved that for breakfast!!

Instead, we went to the recently opened Applebees, featuring their new wood fired grills.  They have actually set up grills inside over wood burning stoves, making the place smell delicious.  I can't say as much for the food however. 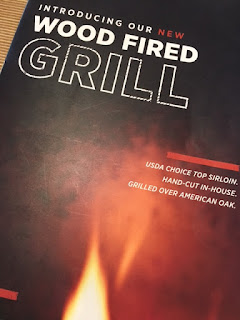 Gretchen ordered salmon with a side of grilled veggies and mashed sweet potatoes.  I ordered mac 'n cheese with chicken tenders.  Since her veggies and potatoes had that just-out-of-the-fridge feel, she asked they be reheated at least enough to remove the icicles.  Five minutes later the waitress came back with the same plate and the same cold sides.  By then, I had tried my entree.  The chicken was hot and delicious ... the pasta cold as ice.

The salmon sides went to the kitchen for a SECOND time, coming back a little warmer, the veggies cooked a little more, but the sweet potatoes barely lukewarm.  I realize this is a newly opened restaurant, but Applebees should have their act together, don't you think? 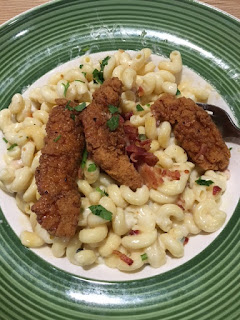 In the end, the waitress was as nice as could be, as was the Manager when she joined us at our table.  She offered something to go or maybe free desserts, but we declined.  Honestly, I think my peanut butter and jelly would have tasted better!!  The Manager left and returned with two gift certificates for $10 each and a big thank you for letting her know exactly what was wrong.  Now she can put in the fix ... or at least I hope she does.   I gave mine to Gretchen since she was gracious enough to buy dinner!!  I certainly hope the next one she stops at serves something a little more appetizing.

On the way home, I showed her how to get to the museum, since I have a quilting class in Fresno all day today.  I think I'll get the last of my Ugly steaks out of the freezer to cook for dinner and I'm sure I have a box of rice around here somewhere.  Even my bad cooking can't be as bad as what Gretchen had at Applebees ... and that's the best restaurant in town!!