I'm one of those that welcomes in the New Year in her jammies sitting on the couch with the puppies.  There is always lots of fireworks in my neighborhood, scaring Miss Jessie into fits.  By 8:00 I thought we were out of the woods, but HECK NO ... those new neighbors to the North of us are not about to let this chance pass them by.

At midnight, as sugar plums danced in my head, the forty-four caliber guns began firing.  I just don't understand this need to fire weapons in the dark.  I grabbed both puppies as they scurried around the bed.  That's when the M-80's went off, least I'm pretty sure that's what they were.  Every one of six shook the windows of my house.  HAPPY NEW YEAR!! 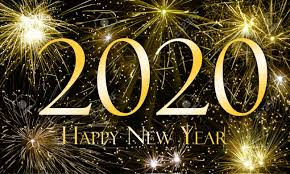 Back to the garage door, the nice young gentleman showed up and went straight to work.  I showed him the culprit and that I had hit the button, making the chain head back to the latch. Trouble was, it wouldn't latch for me.  He grabbed the rope and gave it a snap.  Then he used my ladder to climb up as I watched his every move.  He just grabbed the connection and gave it a sharp tug and VOILA! ..... it snapped right in and the door opened.

Ugh ... I knew that was going to happen, but the good news is I now know exactly how to fix it if it happens again!!  No more trying to hold the door open for me!  He said he would not charge me, but service is a big thing with me, and he showed up in less than twelve hours.  That's pretty good so I tipped him $20.  YAY the door is fixed!

I spent the rest of the afternoon playing with the puppies.  It's really pretty easy since Cooper puts the toy on the couch ... all I have to do is fling it across the room and he retrieves it. 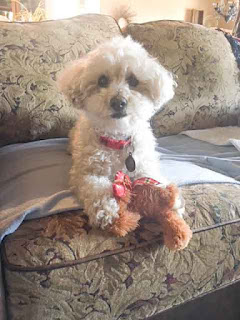 Miss Jessie got in on the action too. 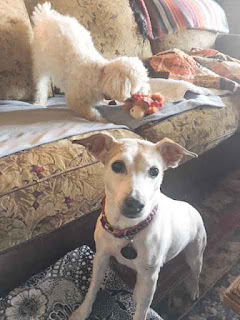 And since I rarely show pictures of Jonathan, here he is with a feather stuck to his beak.  He's such a pretty boy! 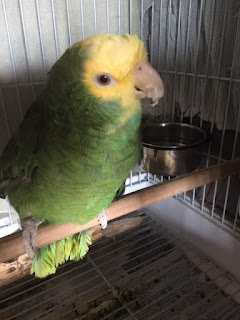 For MY last hurrah, I threw caution to the wind when I found this old recipe.  How can you go wrong with marshmallow creme??  Throw in a passel of Oreos and you've got twice as much crust as you need.  I really did follow the directions and two tablespoons of melter butter is nowhere near enough for 30 Oreos, just so you know. 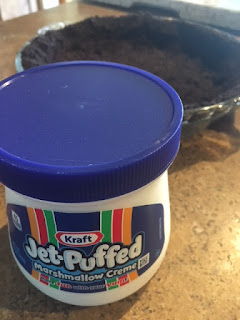 THIS my friends is creme de menthe pie.  It's a throwback to the VERY old days, maybe the 1940's?  My mom was the best pie maker around and always had requests for this one.  I haven't had a taste of this in over 40 years, so I figured I would give it a shot.  See what I did there?  Actually I gave it a little MORE than a shot.

The trouble is, I now have enough creme de menthe left over to make 100 pies, so if you'd like some, just drop by my rig and I'll share.

Creme de menthe, marshmallow creme and whipped cream make up this delicious minty fresh pie.  Think of it as a breath mint after dinner!! 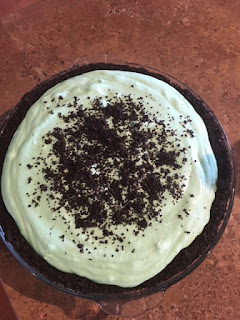 After watching the Rose Parade this morning, I'll finish up washing the rig and packing everything I possibly can, going from note to note so I don't miss anything.

I hope you and your family have the most wonderful 2020 year.