I was up at the usual 4:00, never the happiest moment in my day until Cooper bulldozes my face.  You just can't be mad when that happens!  For the most part the group sat around and chatted since the Vendor buildings weren't carrying anything we had not already seen.

At 11:30 we gathered up and headed to the quonset hut to set up the ice cream social.  This involves MUCH more work than handing out bars.  I have to provide all those bowls, spoons, napkins and two kinds of syrup, not to mention the ice cream.  The idea was to go early and take the ice cream out so it could thaw a tad.  Last year the guys got blisters from scooping.

But WAIT!!!  Yikes!!  The ice cream is VERY soft!  Apparently the freezer wasn't set cold enough?  It was almost a disaster until we discovered it had not melted one whit, but was easy as pie to serve ... even easier!  We scooped and plopped the goods into the bowls in record time. 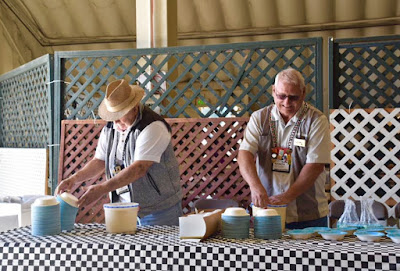 The ladies at the far end garnished almost every bowl with syrup.  Unfortunately, I have loads of syrup left over.  Apparently they don't have the sweet tooth "I" do.  Honestly, I think I have enough bowls, spoons, napkins and syrup to put on another entire ice cream social.  I purchased for the 1700 people they said would be here, but only1100 showed up. 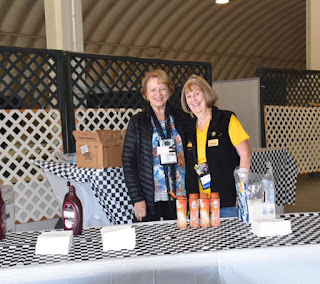 I was getting worried with 20 containers of ice cream left, but people just kept coming in THANK GOODNESS!  You're not going to believe this, but we had exactly ONE container left over, along with four boxes of bars.  That's a miracle!!  I did my little happy dance!

Just then, I got a phone call.  They were ready to install my windshield.  I raced back to the rig and frantically drug everything off the dash.  Two guys got to work immediately removing the windshield, fast as lightning.  They congratulated me on how clean the dash area was, not knowing I hadn't cleaned it in probably two years. 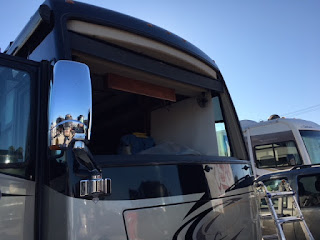 As I sat inside with the puppies, they brought out the new piece and began to install it.  I just can't believe how fast they were.  I suppose it's easy when you do dozens of them at a time. 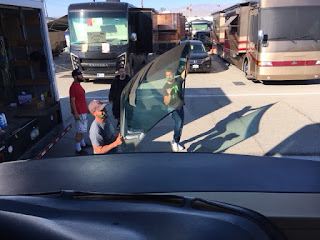 TA DA!!!!  Brand spanking new windshield, ready for that rock hit it will probably take when I get near Tucson.  Forty five minutes and they were gone. 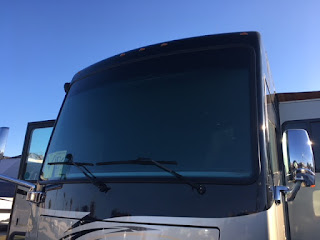 Just then Miss Cocoa came back from the Pet Parade.  She was cute as could be in her lion costume.  This little girl weighs almost 60 pounds and can drag you down the street in a flash. 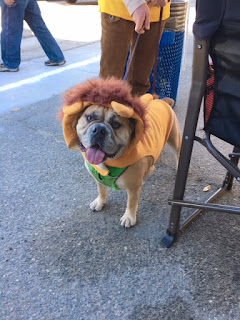 So that was it for the day.  Happy hour was sparse, but one of our members brought minestrone soup for us all to enjoy.  It was a wonderful end to a nice but very chilly day.  We spent two hours discussing how to make this rally better, but had few ideas.

I excused myself to watch the next playoff game.  Today is gather up all your junk and try to make it fit in the bays day.  I'm not in a hurry at all, as I'm heading off to Yuma.