There are lots of sounds in the world I prefer not to hear.  One of the biggest is KA THUNK.  All you motorhome people know EXACTLY  what I'm talking about.

Yesterday morning was pancake breakfast day.  We finally set up our second easy-up, mostly to shade us from the sun.  It's been very cool at night and running up to 75 during the day. 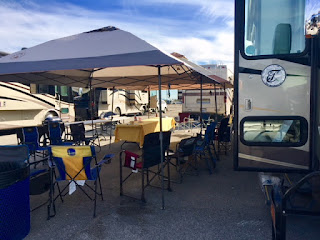 Upon arrival, like within 15 minutes, I hot footed it over to the Golf Cart area to pick up my ride.  When you have to maneuver around the entire fairgrounds with ice cream, you need wheels.  For only the second time in eight years, they had not given mine away.  Amazingly, it even had my name emblazoned on the steering wheel.  That's because in year's past, the Vice President had to give me HIS cart. 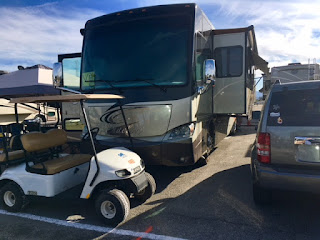 So here's our cooking crew.  Ken on the left and Richard on the right are pancake and sausage cooks extraordinaire.  I even threw in my two cents and heated up the syrup.  Top it with a few berries and breakfast was served.  The cleanup was another story altogether.  Note to self ... bring EXTRA water. 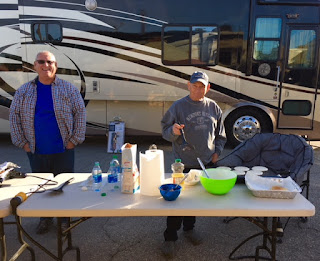 I spent the rest of the day trying to figure out how to edit a Windows Google Document on a Mac computer.  Printing required a trip to Office Max and a zanax to keep from throwing the printer out the window.  The computer couldn't see the printer, and the printer thinks it doesn't have any paper.  Reinstall reinstall.

At long last, persistence prevailed.  I got it to print just one copy, which I then copied over and over.  Take THAT Hewlett Packard!

Happy hour was small but with such fabulous cloudy sunsets, no one cared.  It was Volunteer Dinner night, and in spite of the Italian Subway sandwich menu, most of the group attended. 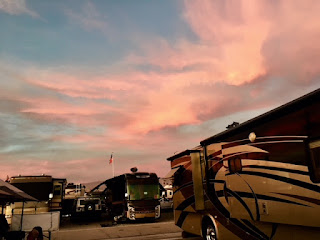 What about the KaThunk you ask?  That happened at 4:30 this morning.  Lucky for me, I was up at 4:00.  Still, the KaThunk gave me a very bad feeling.  It's my electric management system clicking OFF, meaning I have no power.

This has been a problem since the very moment we arrived.  They have replaced the junction box twice now, and finally ran a cord over 100 feet to the next row to power just one of our rigs.  I guess the rest of us are going to do the same.  Funny though, the power for everyone else in our row seems to be just fine. 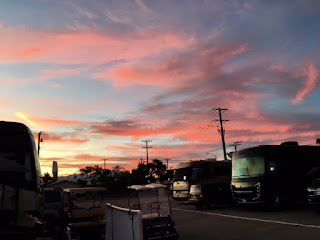 So it's going to be dry camping I'm sure until someone can be found who knows what they are doing and can get four rigs back online.  Wouldn't you know, I would be in the four.  Not that I care, but I paid $150.00 for electricity for this week and I plan on using up every single penny's worth!!

Today on my schedule is getting the Chapter Fair up and running, then returning quickly for my annual oil change.  Maybe by then I'll have power back.  Finger crossed!!