Don't you just love that little ditty?  Now you'll have it in your head all day long as I did after picking up groceries yesterday.  I've never seen so many avocados in one spot and SO much cheaper than the $5 for two I have to pay in California!!

Our first stop of the day was Mexico, very early in the morning, to pick up meds.  I only have one measly prescription that really doesn't cost much in the U.S.  It's the children's Benadryl I pick up for a song that helps my wallet, along with one Z-pak that I hoard until I'm sick as a dog with a cold/flue/virus.  It's rather a shock when you see the bill for $289.20, until you realize that's pesos.

This is a terrible picture right into the sun, but is almost the first thing you see.  I went to the Purple Pharmacy while Cindy went to another in town.  This is where we met up before leaving.  Not only was there no line, there was no one in sight except one man who held the door open for us. 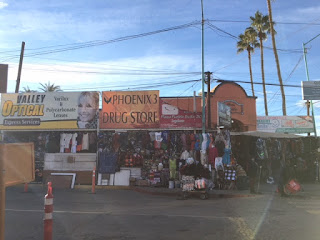 I did a bit of running around before magically ending up back at Grandma Jo's.  How did that happen? 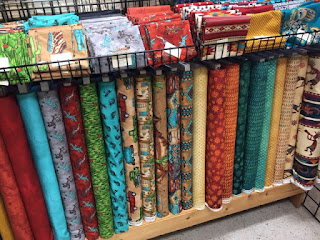 I'm drawn to these fabrics like a moth to a flame.  They are certainly much more colorful this year, more akin to the colors of Mexico. 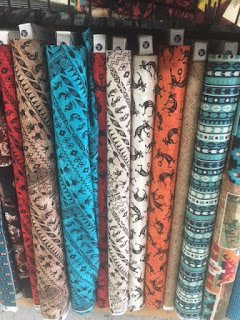 So what do I pick up to finish a quilt?  All these drab brown fabrics! 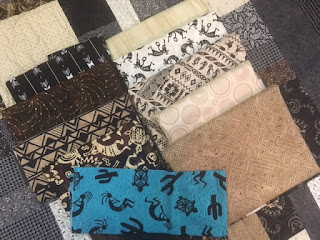 When I mentioned how much the Chance family and I loved those Mexican Tacos, Cindy suggested we go to lunch at a place that serves the authentic variety.  I was all over THAT!!  We drove way out into the foothills to find this place on the side of the frontage road.  I've no idea the name, but if you drive East past Fortuna Rd, you will come upon it.  Just look for all the cars.  They were VERY busy!

Give them your order and pay AFTER you eat. 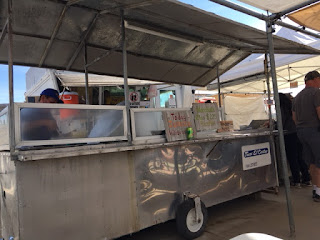 Oh my goodness!  They were SO delicious and just like in Mexico.  This place even had something like ten toppings you could add on.  I guess I won't be missing those tacos after all.  You can bet I'll be going back there!!  Yes, there's a bite missing.  I couldn't wait! 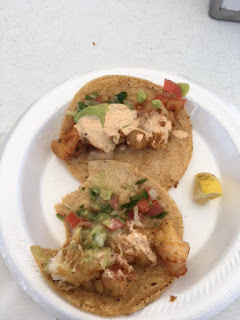 Once home, I tried to organize the contents of my eight fabric boxes, but finally gave up.  Cooper wanted out, so we went for a short walk to the small dog park.   People here are just SO nice.  Cooper has never been to a doggie park before, mostly because Jessie hates every dog on the planet.  Everyone told me the trick was just to let him off leash immediately.

I decided to give it a try.  He was pretty tentative at first until he met a new buddy.  They played racehorse and chased each other around for several minutes.  Then he went off to mark 89 spots as his (typical boy dog).  He had so much fun we will definitely do it again!!  Back home, he crashed! 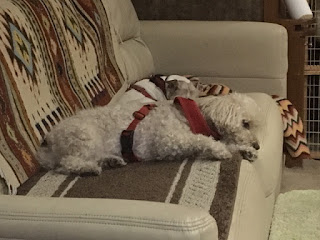 Today is wash the rig day.  I called a local guy who said he would be here around 2:30 to wash and wax my rig for $110.  Wait till he sees it!  I'm hoping he will include waxing the roof, but if not, I'll do it when I get to Tucson.  Has anyone tried floor wax on the roof?  I've heard that's easy and cheap. I certainly need SOMETHING!

In the meantime, I may just sneak off to that taco place again!