There's nothing like an exciting day of traveling in your RV to get your blood flowing!  I'm not sure what's wrong with my weather app, but she's scary sometimes.  I got warning after warning about high winds.  Time to check out and get over the pass in the early hours before the 65 mph wind gusts hit.  Yup .. that's what it said!! 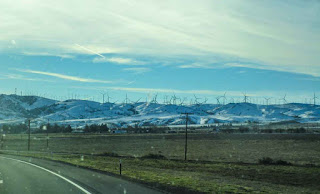 It makes it a little difficult to drive right into the sun, but not nearly as bad as all those ambulance lights in my mirrors.  I was happy the roads were entirely clear of snow over Tehachapi, which had over twelve inches last weekend.  By the way, highway 58 is worse than ever.  Merge left (2 lanes), merge right (1 lane), then 3 lanes, then one again.  It's a complete disaster. 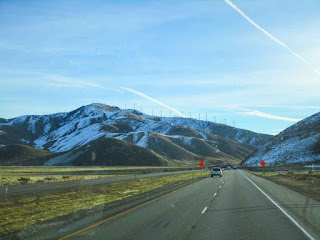 I hit a little wind just over the pass, but not bad enough to slow down.  Pretty soon I was looking for the S curve that winds over the railroad tracks.  Little did I know, they have completed a bypass.  With very little warning of that fact, I almost missed my turnoff on 395 south. 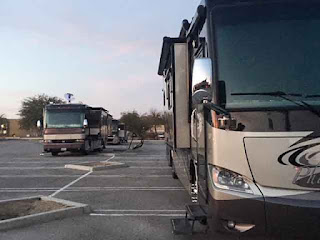 So I'm cruising along looking for my puppy dog rest stop when sirens and bells started going off INSIDE the rig!  WHAT THE HECK???  It was louder than I have ever heard.  I quickly checked all my gauges.  They looked okay, so what could that possibly be?

Then it dawned on me ... the CO2 alarm.  This is a four lane freeway with no place to pull over.  It's just going to scream.  The poor puppies were in a panic!!  I opened my drivers window as wide as it would go and hoped for the best.  The alarm finally stopped.  I suspect maybe Miss Jessie was standing a little too close to it.

Finally, I pulled in to the parking lot in Indio and turned off the engine.  That's when I heard the very loud err err err err.  NOW WHAT?  I ran to the back, finding the exact location to be above the bed.  Maybe it's the AC unit?  Nope, they were all turned off.

I raced outside to see if I could tell what might be in that position.  Turns out it is the local TV antenna, which can be turned as needed.  Maybe there's a short?  Or maybe all that bumping around on terrible California roads turned it on?  I've no idea, but I DID know where it was plugged in.  Once unplugged, I heard no more noise.  Good grief ..... this is turning into a nerve wracking trip!!

The nice sunset helped to calm my nerves ..... a little anyway. 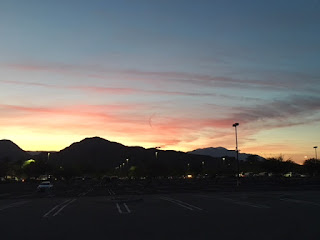 Sadly there are only nine rigs going in with us this morning instead of our usual 18.  That $150 for electricity was just too expensive.  Those that are here think this may be our last Indio rally.  Hopefully the other four show up this morning or I'll be handing out ice cream all by myself!!