I guess nowadays when you're bad, you get put in time out, whatever that amounts to.  Sit in the corner with no toys?  In my day, we got spanked with whatever was handy ... a hairbrush, a coat hanger, a ruler (who keeps a ruler in the kitchen?).

I really didn't move far from the couch.  I spent the first hour on Facebook wishing everyone a Happy New Year!!  Suddenly I remembered the Rose Parade was on TV.  I turned it on, expecting to have my choice of stations to watch.  I have DishNetwork, so I KNEW several stations would be broadcasting.

I posted my findings on Facebook.  That was probably a mistake, since I know Facebook and NBC are good friends.  I heard the heavy iron door clang shut.  I was instantly put in Facebook Jail.  I could still see and read everything, but there was no posting allowed.  It wouldn't even let me SEE my NBC post. 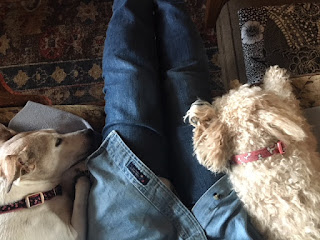 No problem, I switched the TV over to another channel looking for the Rose Bowl game.  While waiting for that to start (yeah, I'm one of those weird DUCK fans) I finished washing up the rig.  Of course there's still packing to do, but at least she's clean for the time being. 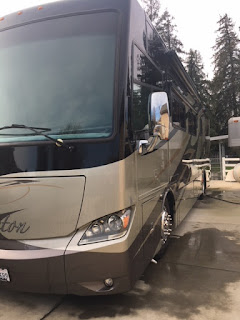 If you didn't see it, the football game was one of the best college games I've seen in awhile.  The Wisconsin team threw a lot of interceptions and the Oregon quarterback dropped the ball a couple of times.  Still, it was neck and neck for the entire game with Oregon finally winning by one point.  It was a nail biter!!

Unfortunately, that didn't keep my nerves at bay.  You would think after eight years of driving to this rally, I would be used to it.

At long last the Jail door opened and I could post on Facebook again.  I mean really, if I didn't have Facebook, how would I know how to cook black-eyed peas and collard greens?  Or when Sadie's Bakery opens in Oregon?

It's going to be a day of running around doing last minute chores, after my required hour on the couch with the puppies and my coffee.  D-Day came much faster this year.