Lucky for me waxing the roof didn't turn out like my jello.  I'm making T-Shirts.  The first will say CHEF WANTED.  You don't even have to be a professional, just cook so I don't have to.  Since I planned on a long day of football, I figured I would make that jello-cream cheese dessert.

Simple, right?  Two cups boiling water with a package of jello.  Stir.  Add one cup water and put in the fridge to set.  In my defense, I was distracted by the thought of getting back up on the RV roof.  I forgot the cup of water.

I realized my mistake too late, but thought what the heck, lets add just a bit of water and see what happens.  When the beaters hit the jello/water mixture, it threw jello everywhere, but eventually mixed up rather nicely considering it was like oil and water.  How lucky, I thought as I beat up the second set of ingredients. 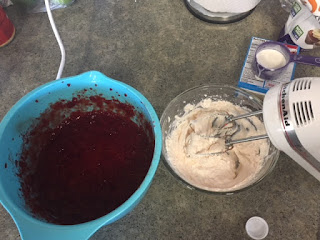 That didn't work quite as well when I blended them together, but the end result was not bad.  I spent the next HOUR cleaning up bits of jello and cream from the tops of my cupboards. 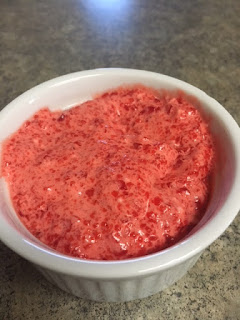 Truly, I require a chef.  Next up, I saw on Facebook that this was the best dip in the entire world.  Her family LOVED it!!  I cut the recipe in half using half a can of chili and half a bar of cream cheese.  Melt on the stove with a cup of cheddar cheese.

At least I didn't burn anything, but this was one of the worst dips I've ever made.  I forced myself to eat what looked like ...... well you can see what it looked like.  I really try not to be wasteful, but most of this ended up in the cemetery out back.  Even the coyotes won't eat THIS!! 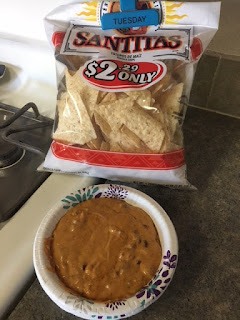 Okay ... my LAST try at cooking something edible for the football games, which by now have the Titans losing to Kansas City.  I'm happy, because it's been 50 years since Kansas City made it to the Super Bowl.

Since I had all those s'mores ingredients leftover from the rally, I figured they would be easy to fix, something I could not mess up.  Sure enough, they came out wonderful, but lack the flavor I remember as a kid.  Maybe it's the marshmallows baked in the oven.  The chocolate didn't even taste right, let alone the graham crackers.  I think that bean dip screwed up my taste buds!! 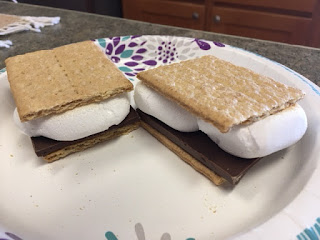 My second T-Shirt will say I SURVIVED THE ROOF -- TWICE!!  During the commercials, I set up for the second climb to Mount Everest since the wind died down considerably.  Here's why I wax the roof.  It's white and oxidizes something terrible in the sun.  Moisture collects on the top from early morning coolness and drips white gunk down the sides.

Most of the top section of my rig is painted black, making it show up even more.  This is minimal compared to what it normally looks like.  I call them tiger stripes.  This is only two days after having it washed by the crew.  It gets MUCH worse, completely covering entire sections of the sides. 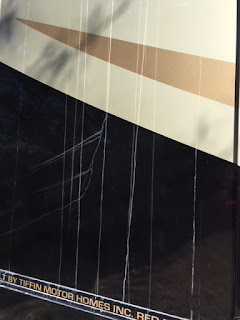 During a break in football action, I again scaled the mountaintop with my mop to put on a second coat.  Most all of those uneven sections dried and I used much less on the second coat.  I'm happy with the results, hoping it lasts for awhile.  I gather I'll have to do this at least every six months.  In the meantime, I'm trying to get a cover built to park under.

I finished watching the play-off games .... boy were they great .... with the 49ers winning.  It will be a great Super Bowl in a couple of weeks.  That should give me time to come up with something edible for game watching.