It Could Have Been Worse

Sadly, as I perused the outside of my rig while getting ready to leave Yuma, I saw the infamous tiger strips trickling down the sides from condensation.  Gee ... it wasn't even clean ONE DAY!  At least it's an easy fix at this point.  It could have been worse.

Our timing was perfect ... as I was leaving the park, Ray and Cindy were coming in.  We held up traffic while saying our goodbyes and I drove off into the hazy Arizona skies.

My first encounter was this guy.  His sign says he's going to Texas.  That's a long ride on a bike.  It also says he's hungry, but I was going uphill at a good clip.  There was just no way I could toss him that leftover Panda Express.  Can you just imagine?  It's pretty cold in the desert at night 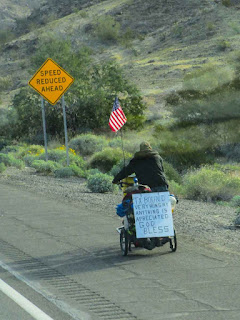 This was as spectacular as the scenery got.  I wondered about the bicycle guy going downhill here. 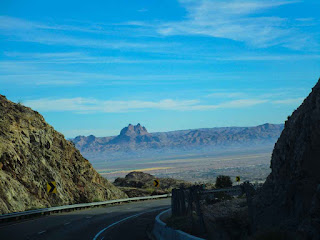 The canyons in this area are beautiful.  It would be fun to do some hiking. 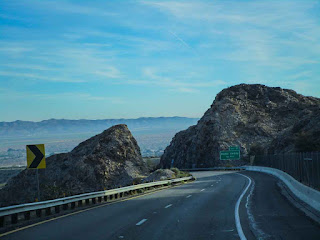 Soon I ran into this pair.  Yup ... there are TWO people on that bike.  I can certainly see doing this on the Oregon Coast, but across Highway 8's desolate road?  No way.  It took me five hours and that was WAY too long!! 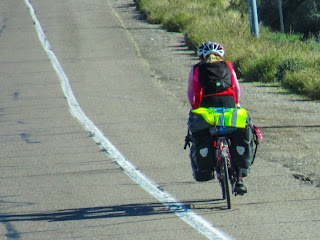 They are still working on the highway all the way to Gila Bend.  At least it was a nice distraction.  It certainly could have been worse ... I could be sitting on that bicycle!!! 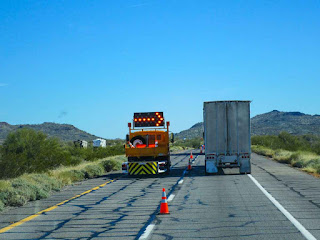 Once home, I unhooked the Jeep and backed the long way into my driveway.  What a surprise!!  Mr. Chance had left some old wood for me to park on.  I added 2 x 12's to one side so I would be level, and hit it right in the middle the first try.  Yahoo!!

Mrs. Chance then invited me to dinner.  Who could say no to Taco Soup?  I unloaded half the freezer, then hotfooted it over for a great meal.  I don't know how she gets so much flavor from chicken and broth.

I mentioned I was going to find some mop 'n glo today for the rig roof, but didn't think my ladder was tall enough.  Well look right here Patty said ... is that tall enough?  So I stole Dan's ladder, stuffing it into my Jeep.  Shhhh don't tell him!!! 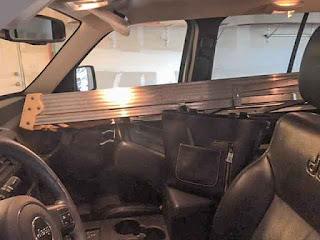 Once back home, I was serenaded by a lovely coyote soprano.  The puppies were not impressed.  Cooper talked back to him for 30 minutes as it moved closer and closer to the house.  No worries, the puppies were safely inside.

It must have been roaming around however, because Cooper refused to go to sleep come bedtime.  He kept bothering me until I finally got up.  We sat on the couch for maybe 30 minutes with Coop growling every so often.  I guess the coyote left, because he finally fell asleep, whereupon I promptly went to bed!!  It's nice to have a watch pup in the house!!  It could have been worse, I could be sleeping on the desert floor next to my bicycle!!