For those of you just waiting on the edge of your seat for news of the latest and greatest bullet train, I present you this picture.  It's a terrible picture, but the best I could do.  The battery on my camera died, leaving me with a hard-to-hold phone.

You probably don't remember the last picture I posted.  No worries, it looked exactly like this one except for the crane.  That part that looks like it just ENDS on the left?  Yup ... it just ends in mid air. I think this section is maybe a mile long?  Then there's a big break with another section at the other end of town.  I'm pretty sure it will not be finished until I'm dead.  At any rate, there you go. 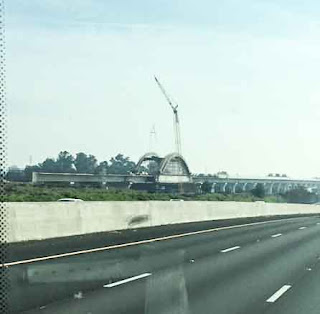 Traffic was very heavy along Highway 99.  I guess I missed the memo from the truck drivers saying we are all going to travel 50 mph.  The speed limit is 55.  I spent most of my time trying to pass trucks.  Lucky for me, it was a bright sunshiny day.

In no time I arrived at Orange Grove RV Park.  There's a good reason they call it that. The spaces are in between rows and rows of orange trees.  Grab a bag because you get to pick all you can fit in one bag for FREE.

I would say this year they are a little worse for wear.  Not the smallest I've seen, but not the biggest either.  I'll taste test one before offering them up on the fruit platter at the rally. 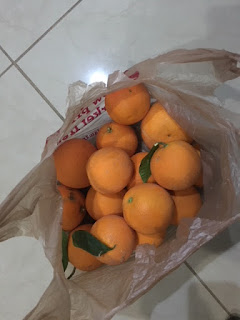 The second I arrived, I started and completed the age old crappy task of dumping the black tank.  Nancy was a bad girl and completely forgot to dump it.  I put everything I could think of down that hole and drove for 3-1/2 hours, hitting the brakes every so often to slosh things around.  Everything came out roses, so I dodged a bullet.

So there you have it ... an amazing adventurous day.  I won't mention the guy who pulled in next to me in his huge 45 foot fabulous rig and left his engine running for 30 minutes, nor the guy on the other side who has had his jet-engine heater roaring all night long.  Why not buy a little electric heater for $25 and plug it in.  It sure would keep the park from feeling like an airport.

I'm off early this morning.  The forecast is for wind, but only if you look at the front page.  Delve further into the weather app and it says 2-6 mph.  Who knows.  I'll drive slower.

Posted by Nancy Kissack at 5:15 AM