I Think I'm There

I have finally arrived.  Some time in the last year or so, I got old.  I seem to require much more sleep, although the puppies don't let that happen.  Add to that the trains that saunter by nightly and I think I'm heading towards NAPS.  Yup ... that age old solution for old age.

In the meantime, I've occasionally gotten the grouchies.  Like yesterday when I discovered my phone bill had gone up ANOTHER $5.75.  No big deal right?  Except I am sure AT&T is doing everything they possibly can to release me from my unlimited contract.  Let's face it, I probably use up more gigs than six people put together.

I finally checked the statement and discovered my bank was late in making that payment by ONE DAY.  Traveling requires I make all my payments on-line.  That was a late fee.  The grouchies began to collect in my brain.

Nancy Sweetness gets more critters with honey than she does when Nancy The Blonde plays dumb.  I decided to try honey.  I even did it in a CHAT session with them, not the easiest way to communicate.  Amazingly, just like the nut situation, she got her supervisor on line who authorized a credit.

Truthfully, I think they looked at my record of payments over 30 years and decided to give me a break.  Had they not, Nancy the Screaming Banshee would have appeared. 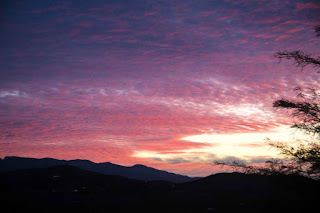 I spent the next three hours being President of the RV Group.  I sent out an email with attached survey (really a link the previous President made up for me) to see how many people could attend the Colorado Rally.  It went to 57 plus people and I got four responses.

I mentioned a new rally we are working on ... riding Speeders on the Amador Central Railroad line in California.  Sounds like fun to me, as long as they are POWERED.  I can still remember pedaling that railroad mechanical device of pain two miles UPHILL in Oregon (or wherever we were)!!  I have tried to block that out of my mind ever since.

That's probably what brought about my latest pain in the butt.  Literally, my left hip has decided to pay me back.  Maybe it's too much exercise, or maybe it's not enough.  At any rate, I think I'm finally there.  OLD AGE has arrived at my house. 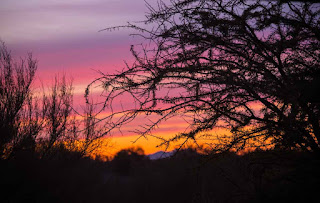 Most likely it's from sitting too much, so today I'll head out my back yard and across the tracks to see what I can see.  Although the sunsets have been few and far between, they are still magnificent Arizona sunsets.  I don't want to create any bad juju, but there has been no mention or sight of that lovely white stuff that floats from the sky.  So far it's been a perfect Arizona winter!