I don't know what got into me.  Truly, if it's a MAN project, I put it off for days, even months.  Painting is one of those things I procrastinate about.

It seems the previous owners did not paint this block fence until after the plants were two feet high.  There was a big section in the middle that had no paint on it since I had removed the snow-killed plants.  Having lost my phone for about an hour, I have no "before" pictures.

I decided it was time to cover just that gray section.  I remembered the owner had shown me a bucket of paint left in the garage for just such an occasion. 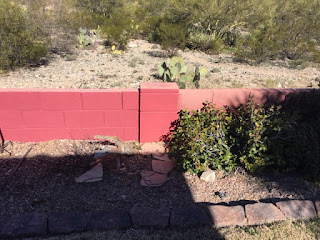 I grabbed my cheapest brush and set to painting.  Hmmmm you could tell immediately the older paint had faded.  Maybe I'll do a little more.  Yeah, by the time I got done, I had painted most all of the wall.  You can see where I stopped in the above photo due to foliage, following up by cactus with BIG spikes.  I'm not going there!! 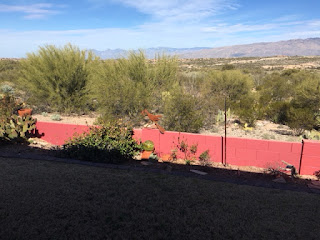 So that was my ten minute project turned into two hours on my knees.  How nice that mother nature decided to test my skills by raining for the next twelve hours.  So far the paint is staying put.

I wrapped up the brush in foil and stuck it in the freezer.  That's an old painter's trick I learned years ago to keep from having to wash the brush every time you use it.  Thaw it out and you're good to go!

It will have to wait however, since early this morning I'm off to the Cummins repair shop to get that SCR valve recall on my rig taken care of.

It's a shame I didn't get any sleep.  I received a frantic call from the King at the Magic Kingdom (Bingo).  The infernal machine refused to open or conduct business.  I figured it's because there was two new ladies pushing the buttons.  After several minutes of INAPPROPRIATE KEY notices, we were able to figure out the problem.  Someone hit something requiring a Clerk Number, which we do not use.  It was a quick fix.  I'll just sleep at the repair shop!!