The mantra around this house is if it CAN happen, it WILL happen .... to me.  I thought it couldn't get any worse than all four fire alarms going off at the very same time with no ability to turn them off.  I was again ..... wait for it ..... WRONG!

Maintenance items for the motorhome weight on my mind constantly.  If a trip is coming up, I just can't sit still until I've done everything possible to be sure it's a safe one.  Sometimes that gets me in trouble.

Yesterday, it warmed up enough to check the air in the tires.  First off, that scares me.  One of our construction employees (actually the son) aired up some huge tires that exploded in his face.  Just imagine the broken bones.  So when I pull out my little air compressor, I'm super careful.

I checked the air and filled them all except one.  It's the inside dually whose valve stem is at an angle making it difficult to attach the gauge.  Seems like I let OUT more air than I put in.  I finally gave up, figuring I'd have it checked down the road by someone a little more proficient than I. 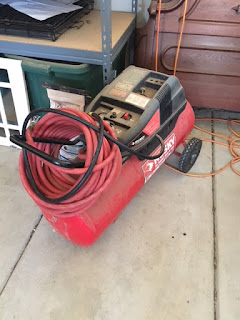 When I went to return the compressor to the garage, the door went UP just fine, but it refused to go DOWN.  If only I had remembered the track spray.  I didn't.  Instead, I finally grabbed the little orange cord.  YIKES!!!  The door began to fall!!

No problem, I grabbed the rake, wrapped the tines around the rope and let the door slowly down to the floor.  I should have quit there.

Okay, here's the part where you can laugh!  I grabbed my ladder, climbed up and attempted to pull the door open, hoping to reset the latch.  It refused my every attempt.  So now I'm stuck up on the ladder holding on to the door for dear life to keep it from slamming to the ground.  I discovered WAY too late that the cord wasn't long enough for me to keep hold while my feet were on the ground.  I had visions of standing on the ladder all night long.

Amazingly, I had my phone in my pocket.  Who can I call??  HELP!!  I'M STUCK!!!  How embarrassing!  That's what I said when I called my neighbor, hoping her husband might be home.  He was not, but she sent her not quite tall enough son over instead.  He was able to hold the door open with my rake until I got down and we slowly lowered it to the floor.  Good grief!!!! 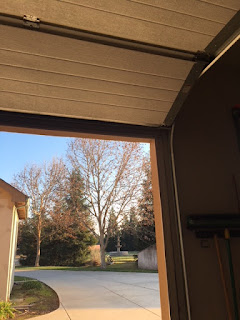 Now to find someone to FIX it!  I remembered seeing Garage Door Man while doing bookkeeping for an apartment building.  In an amazing minute of luck, I sent him a text message, whereupon he stated he would be here this morning at 10:00 to fix my door.  Hallelujah!!!!

I spent the rest of the evening relaxing in my new slippers, relieved that the door would be fixed and the tires had air. Yes, that's Cooper's moose, who is never far away. 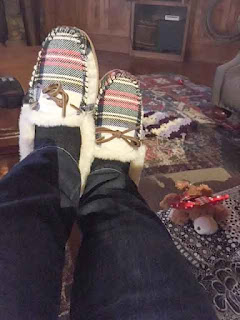 I think I need a new mantra!!  Or a handy MAN!!  Or SOMEONE to get me out of trouble when I try to fix things!!