I've no idea what got in to me as I sauntered by the long aisle of edible cow and chicken.  I usually just grab the fowl and head on out the door.  On THIS day however, I remembered the amazing fillet mignon I used to order at a tiny restaurant in Lake Tahoe called the Greenhouse.  It was melt in your mouth.

Sadly, I have to tell you that the quality of meat is nowhere near what it was when we were raising beef on the ranch.  Back then there were two kinds.  Prime and choice.  Prime meat was held in the lockers to age, making it much more tender and tasty.  Choice was basically tough hamburger.

In today's world, there are about 8 different grades, none of which compare to the Prime of old.  You might find some at say Gallaghers Steakhouse in New York where they age it to perfection.  In your local market however, you are probably lucky to get select meat ... that's the grade BELOW choice.  You will need a sharp knife, which is why I basically gave up on cooking beef.

Even as little as twenty years ago, I picked up fillet at my local very small town butcher shop, back when they actually HAD butcher shops.  So when I saw THIS sitting amid the hamburger, london broil and tri-tip, I caved.  I purposely am not showing you the price.  You would spit your coffee across the table. 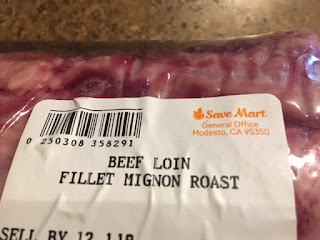 It was ridiculously expensive.  I had a moment of insanity and dropped it in my basket.  I guess I yearned for a taste of the past.  Although I had a fleeting thought of cutting it up for stroganoff (believe it or not, it used to be so cheap we actually did that), in the end I decided to cook it on my barbecue the same way George Yates showed me how to cook a chicken.

Well .... not exactly ... I seared all the sides on high, then turned it down to low and let it go.  I totally guessed on the amount of time, checking it occasionally with my new digital thermometer.  I finally got rid of my Air Conditioning thermometer, which didn't really work well for meat.

It came out FABULOUS!!!  I let it rest for 15 minutes before cutting a nice slab.  YUM YUM!!  It might have been a better walk down memory lane if I made burners sauce (just wanted to show you auto correct ... first it said burmoose) but really it was BÉARNAISE sauce.  Still, it was a masterpiece I was proud of.  HOWEVER, in no way was it as good as in years past. 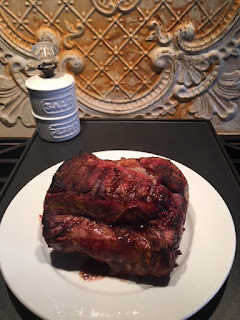 I had it for breakfast, lunch and dinner until finally using up the balance for stroganoff.  Unfortunately the chicken broth I used, because I didn't have beef broth, didn't do much for the flavor.    I certainly wouldn't feed it to company, but I'm NOT going to throw away one single ounce of this lovely cow.

In the meantime, I tried to play President of the Golden Spike Group.  I needed to send out an agenda for the Indio Rally, along with pot luck assignments.  I failed miserably.  The Group I spent two hours compiling with all those emails, disappeared completely.  The only group left was the four emails that were rejected.  Frustrating to say the least.

I can't believe I'm better at painting than I am creating GROUPS!