Moving From Place To Place

The cleaning bug bit me yesterday.  Here I was happily ensconced on the couch and ZAP!  I could see the mountain of accumulated dust on the coffee table and puppy prints on the kitchen floor.  I drug out my vacuum cleaner and went to work.

This time, just for kicks, I timed myself.  In my defense, it's a big house, even though I block off three big rooms.  There's no use going overboard and cleaning more than I need to.  It still took me over an hour.

For those that don't know my past, I was forced into manual labor at the tender age of six.  It was my job to dust everything in the ranch house, as well as iron the pillowcases and handkerchiefs with the death-defying mangle iron.  I hated every second of it because I wanted to be out riding horses.  That feeling has never left my body!

Once that horrible task was completed, I began work on my newest quilt.  At the time I purchased it in Salt Lake City, I was feeling pretty guilty about the price.  I got a nice surprise when I opened the package and it was all PRECUT.  I did a little happy dance.

I've now completed 18 of 42 squares.  This is not a black and white picture ... the colors are kind of brownish-gray, so they don't show up.  Not your normal Nancy colors. 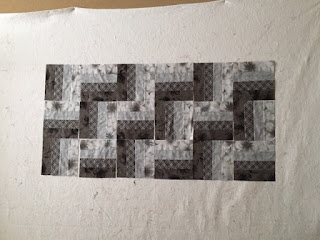 In the middle of that, something came over me.  My little brain said "you don't need all this junk!  Let's get rid of some stuff!!"  I moved all the boxes out of the breakfast nook first.  Some went to the rig and most went to the trash bin.  I was a flurry of motion as I raced around.

Suddenly it dawned on me I was just moving stuff from place to place.  That wasn't the original idea. At that point, I moved one very large old steamer trunk out to the garage, followed by the panini press, two roped-wrapped glass fishing balls from Japan and two tiny metal end tables that belonged on the patio.  If nothing else, I'm diverse.  Sadly, I was still just moving stuff from place to place, but at least it was now out of sight.

I had so much more room, I decided to make good use of it.  I sat down at my roomy breakfast table for ANOTHER piece of that cheesecake.  I know, bad Nancy, but it's only three inches long and about 1-1/2 inches wide.  It was just the power lunch I needed to continue. 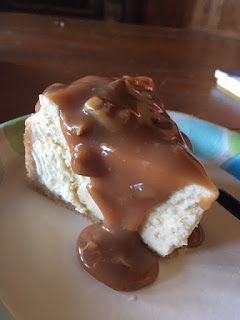 There's still lots to go, but I made good headway.  Several pieces even went in the rig to be transported to Tucson, where I will probably have the same problem.

In the meantime, I worked on my next painting a little.  Since I have absolutely no idea how to mix colors or even how to paint, I work at it for a few minutes, then walk away.  You really can't put too much water on it before you have to stop and let it dry.  Little did I know, this is not an instant gratification hobby. 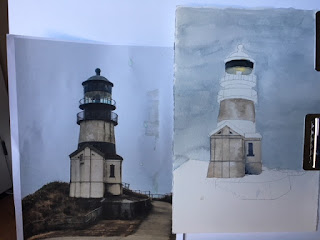 I took four more loads out to the rig, trying to fit things in and disperse the weight.  That's when I discovered two drawers full I had planned on unloading LAST time in Tucson.  Apparently I forgot all about them.  Now I'm making a list and checking it twice, kind of like Santa Claus.

Later in the day, I stopped in at my local Save Mart meat counter for a short conversation.  I'll tell you all about it tomorrow .... after the Magic Kingdom of Elks Bingo!