Did Someone Say PIE?

It's rather sad that going to Costco is the adventure of your day.  Despite the lure of 75% off everything in the stores, I've been sticking close to home.  There's just too much stuff out there I really don't need.  With willpower like mine, it's better to be bored in the house!

Then again, Costco is almost as dangerous as the Mall.  Look at these pies.  Have you ever seen so many in one sitting?  They are stacked FIVE deep!!  Do they really sell all this stuff? 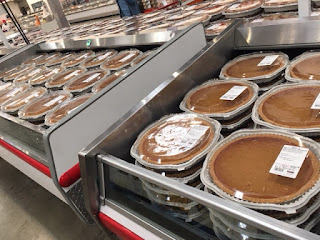 How about APPLE?  By my count, there are 200 apple pies sitting here.  Lucky for me, I had eaten a big breakfast, followed up by a large box of goodies from the bakery in Idaho, owned by my nephew's wife. 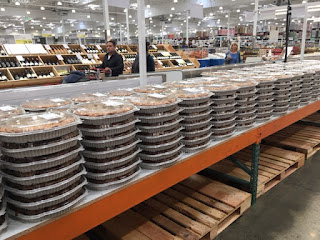 Nothing kills the thought of pumpkin or apple pie more than a huge chocolate-mint chubby, 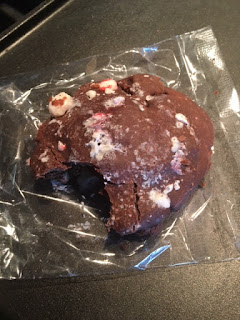 followed up by not one, but TWO chocolate dipped marshmallows.  Basically, I was on the verge of a sugar coma, which I later regretted!! 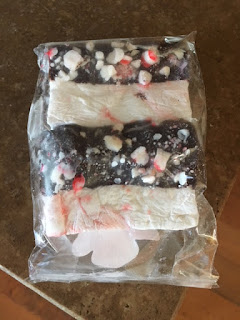 At any rate, I checked out Costco's meat counter.  Here's what I found.  If it's PRIME, it is so stated, not only on the label, but on the wall behind.  Here are two lovely pieces of New York steak.  Check out the white fat marbling.  THIS would be a tasty steak to eat, and tender to boot.

Then look at the price.  $13.99 a pound.  That makes this package $30.78.  A little steep for my budget, even if I cut it into four pieces.  However, if beef were really my thing, I would buy this.  Trouble is, I've just had too much beef over my lifetime to really want any more steaks. 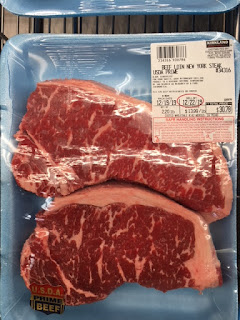 As for Costco's hamburger, it was choice and only 85% lean, meaning there would be cups of grease to throw away.  Prime hamburger is hard to find.  For those that asked, here's the recipe for my meatloaf.

1-1/2 pounds hamburger
1 egg
Half an onion grated (or chopped up fine)
1/4 cup parmesan cheese (or bread crumbs)
1 tblsp parsley
Every spice you can find in your cabinet
including salt, pepper, garlic salt, onion powder
and just a tiny dash of smoked paprika
One big glug of barbecue sauce, which I also
pour over the top after patting it down in a pan.
Bake at 350 for about 45 minutes

So here's my next question.  Is chicken graded?  Sometimes I get really good tender chicken, and sometimes I get something akin to leather, so tough even the pressure cooker can't make it better.  And what about turkey?  Inquiring minds want to know!!