There's nothing like a long Sunday afternoon watching football for me to become bored to tears.  Don't get me wrong, I LOVE football, but for the most part, the teams playing didn't interest me.  The 49'ers played a good game, but I don't like them any more due to their stance on the American Flag.

So when Monday rolled around, I put on some Christmas music to get in the mood.  All it made me want to do was bake.  But what to do with all the results?  I've no kids or family around to pass them off on ... I mean GIVE them to.  I scrounged through the cupboards to see what I might find.

Sure enough ... perfect for Christmas ... snowballs!!  Actually, Mexican Christmas cookies.  Super easy to make, except for that grinding the nuts part.  I had to clean up nuts from one side of the kitchen to the other.  The powdered sugar you roll them in was even worse. 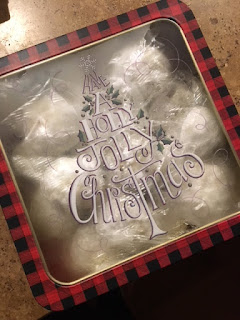 At least I thought to put towels underneath the racks to catch the soft white powdery stuff, but THEN you had to dip them TWICE!!  It looked like it snowed in my kitchen!!  Even the puppies helped with THAT cleanup!!

Here's my little stash which I did NOT double dip.  I figured they were sugary enough.  These went in the freezer.  The box above contains a major portion which will go to the Castle Lawyer tonight.  At least she has grandkids to pass them off to!! 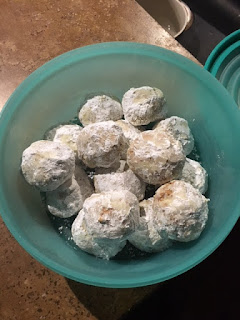 Then I saw THIS little recipe.  There's really no baking involved.  These don't even have a name.  It's what I picked up from watching the Hallmark Channel.  Take an entire sleeve of Ritz crackers.  Just to be sure they were healthy, I chose the whole wheat variety, which is completely OFF my list of edible things.

Smear a little peanut butter between two.  They said to use a LOT, so I did.  Don't do that.  Use just a little.  Then place a second cracker on top.  I broke one, which meant I had to eat it.  That left me with one cracker over ... so of course I had to eat that one too!!  I could feel the wheat coursing through my veins.

Melt chocolate chips in a double boiler.  Although I could have used my instant pot ... it works great as a double boiler ... I used my glass bowl over a saucepan.  Here's the thing.  See that spoon standing up?  It's way too thick.  Do NOT try to add anything to the hot melted chocolate to thin it out.  It seizes up and turns into a solid block.  Don't ask me how I know that!! 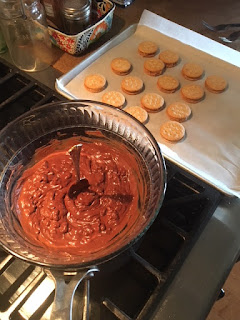 Once the second batch was melted along with a little cream I put in while it was cold, I hand dipped the crackers into the lovely brown sauce and laid them on a sheet pan.  Since I had just a tad of chocolate left over, I dabbed it on top of each one.  Off to the fridge they went.  That's it ..... no COOKING ... no BAKING!! 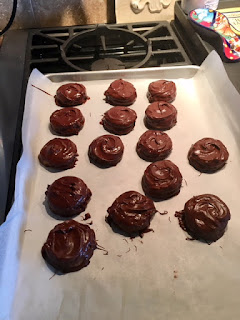 Now for the taste test!!  Just ONE almost killed me.  These are the most decadent, chocolaty, peanut buttery snacks I've ever had!!  They also immediately put me into a sugar coma that lasted for the next two hours.  In fact, I figured I would never need any more sugar the rest of my life as I laid flat out on the couch!!

Yes, they were THAT good!!  However, in the interest of staying alert and not crashing totally, I would use less peanut butter and less chocolate.  Honestly, I would rather stick to the snowballs that are not NEAR as sweet!  Go figure!!

It's time for the Magic Kingdom again, so you will probably find me snoozing on the couch later this morning, gearing up for the onslaught of peasants.