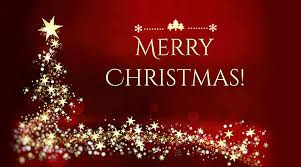 I couldn't resist this picture.  This puppy looks like the reincarnation of our cow dog CHAMP.  He was a rambunctious boy like no other.  He liked nothing more than chasing cows, but only when you told him he could.  He spent more time looking at you for direction than he did the cows.  Just look at that face!! 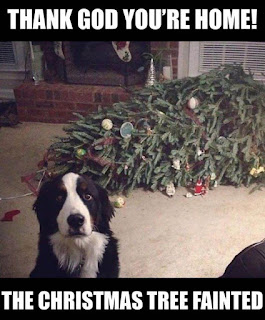 All my kids wish you a very merry Christmas and a happy New Year.  They were all very good, except Jessie who like any good kid, refused to pose for a picture, and Jonathan who bit me when I tried to put the Santa hat on him. 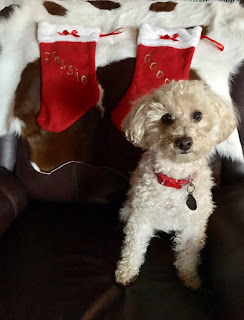 I planned on staying home Christmas eve, but discovered I had nothing for dinner except some leftover chicken and a piece of quiche.  It's funny that Christmas dinner items never made it to my grocery list.  Or maybe it did, I just couldn't find the list.

At any rate, my girlfriend from work who retired right after me, called to see if I was interested in dinner.  When her daughter mentioned to her boss she didn't want to spend a fortune going out to eat, he promptly ordered her a full prime rib dinner.  He could be my boss any time!!

It was delicious as the three of us laughed about the Elf on the Shelf antics going on in her house.  I don't know who invented the Elf, but he sure seems to work keeping kids "nice" for Santa.  Unfortunately the Elf that lives in my only nephew's house had a catastrophic event.

The youngest got up in the middle of the night, turning all the lights on.  He forgot to turn them off.  Next morning, the Elf's legs were melted completely off.  Talk about devastated!!  If the Elf can't walk, how will he ever tell Santa about the good boy living there?  Tears ensued.  I couldn't stop laughing!  Now aren't you glad they didn't have that when WE were young? 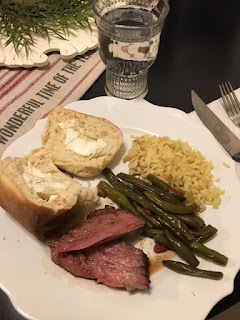 Santa didn't need any elves to tell him Cooper, Jessie and Jonathan were good.  I think I see a new ball in Cooper's stocking and a red chew toy for Jessie.  Jonathan's chew toy scared him to death (birds don't like change in their house) so it sits on the floor untouched. 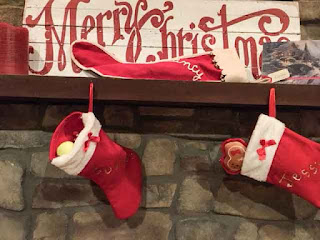 I hope everyone has a wonderful day with your family and a fabulous dinner, whether in your house or out with your RV friends.  I'll be on the couch with the kids, enjoying my quiche along with a little piece of leftover prime rib.