In the middle of the night, I thought it was just rain on the roof.  Nope ..... Santa had come down my chimney, through the glass fireplace door, right into the family room and filled those stockings with care.  Cooper went absolutely bananas for his little moose.

The squeaker was dead in a short three minutes, but it didn't matter.  You can SEE the intensity!!  I bet I threw that thing across the room over 100 times!  He literally never quit playing for an amazing eleven hours!! 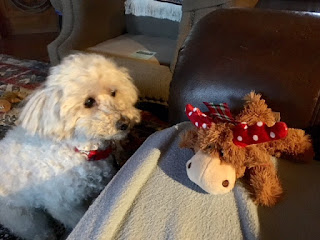 This is Miss Jessie's happy face.  She was just as enamored with her new cloth chew bone.  The game is to try and take it away while she snarls and makes ugly faces, pretty much like a lot of children on Christmas morning! 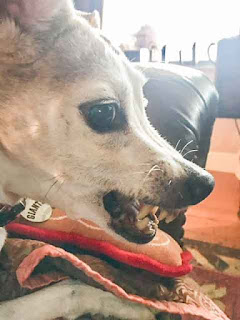 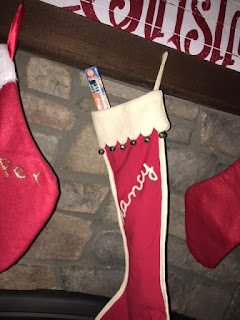 Here's dinner from Christmas eve, that beautiful prime rib, along with a little Mudslide for good luck.    Mostly it was all about spending time with these two!!!  Diane (in back) and I worked together for eleven years at the County, where we were able to get her daughter Shelbi a position in the Courts system.  And THAT'S how we got this fabulous dinner!! 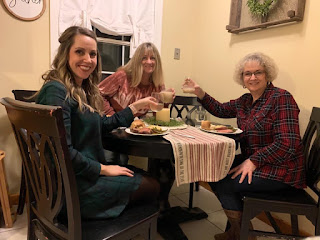 After lounging with the puppies all day, my arm sore from all the throwing of toys, I gathered up everything I needed to add crab to our dinner table.  When I saw FRESH CRAB at Costco, I picked one up on a whim.

Turns out it was a good whim, because it actually paired very well with another glass of mudslide, roasted pork loin, scalloped potatoes and salad.  THIS time, Shelbi's son Braden joined us for dinner. Shelbi made this roasted pork tenderloin in the oven while Diane and I made the sauce.  Sometimes it takes two.  The recipe is a secret, handed down in her ex-husband's family for years.  He refused to give it to her, but had forgotten someone had surreptitiously taken a picture. 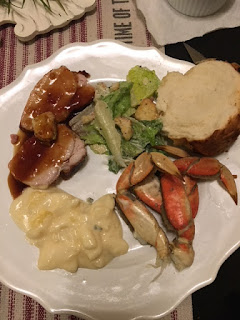 So here it is for the world to see.  You know what?  It was REALLY good!!  Rather sweet, so I might cut back on the sugar, but definitely a keeper!!!  I'll be making this again for sure!  Just so you know, it wasn't me.  I took this picture of the "picture" so I would have the recipe!! 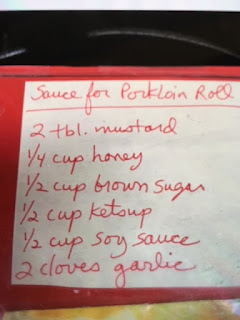 Full to the brim, I again came home with all the leftovers, as they are leaving in about 30 minutes for Legoland!  They get FOUR sleepovers, meaning they are staying there for four days.  Merry Christmas to Braden!!

Cooper finally crashed on the couch after one more hour of throwing the moose when I got home.  I can see the sugarplums dancing in his head, or maybe that's moose. 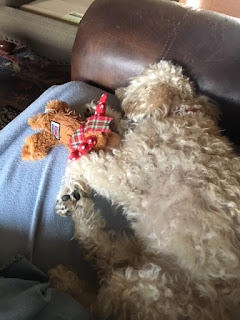 It's 39 degrees this morning and raining.  I expect it to snow any moment and actually received a warming from Tucson that snow just might fall there too.  That's fine .... get it out of your system Tucson, before I get there.

That does make it rather difficult to wash the rig, so I'll probably spend today packing a little more and being miserable on the couch because I ate too much!!  I hope your Christmas was even more wonderful than mine!!!