It's still raining.  In all my years of living in this valley, I don't think it has ever rained every day for a week.  Sometimes it's a downpour, sometimes it's sprinkling just enough to get you wet.  That's why I stayed inside for the better part of the day.

I did run off to Michaels hunting down the elusive Gator Board for my painting class.  Gator's are pretty scarce in these parts, as is practically everything else.  I quickly dismissed the thought of heading off into another State to find the items on my list.  Amazon is my friend, now delivering everything from dog food to my fake coffee to Gators.

SO ... I loved those sweet potatoes so much, I purchased two for a mere pittance and decided to see if I could freeze them like the local company did.  I peeled them with my handy dandy vegetable peeler, cut them into circles and then into small squares.  Happily, I did not lose one single finger.  I laid them on parchment paper so as not to stick permanently to my pan and placed them in the freezer.

Who knew it would be so easy?  Once frozen, I transferred them to a zip-lok bag.  Today I'll fry them up and see if the taste is anything the same.  By the way, these are considered potatoes and are NOT on my diet.  I do plan on partaking a tad, but mostly, these are for Cooper, who has decided they are quite a treat.  Little does he know, they are GOOD for him.

I know, lots of trouble for a mutt, but not NEAR as much trouble as that darned parrot I live with.  Talk about finicky!!  One day I'll tell you about THAT appetite! 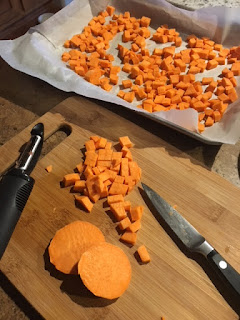 Finally the rain subsided enough to grab my ladder from the gutter job and head off to the motorhome. 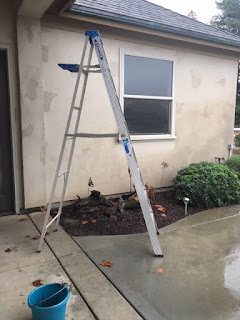 This isn't exactly my problem, but it's similar and the only thing I could find on the internet.  The seals are folding in and not keeping water out.  I spent the next two hours sticking my fingers in behind the seal and pulling it out.  I don't know why, because I'm pretty sure as soon as I put the slides in, they will go right back where they were. 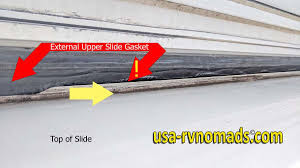 At any rate, I conditioned every single one, even when the raindrops began to fall on my head.  I'm intrigued by the comment from Allison who suggested grip tape.  If anyone knows exactly where to put said tape, maybe you could send a picture.  I plan on looking it up on Google later today.  Quite possibly in March, I will have the stubborn seals replaced. 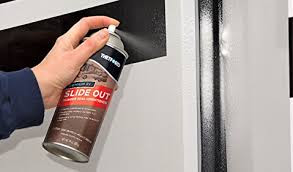 In no time, I looked like a drowned rat.  Soaked to the skin, I finally put the ladder back in the gutter-cleaning position.  Once the seals appeared dry, I closed up the slides and began the hunt for 2 x 12's. The passenger side is sloped downhill so water will run off the concrete.  That slope is what's helping the water come inside.  I've used the jacks for the last two weeks to keep it level.

I had a thought it might be better to use lumber instead.  A quick call to Mr. Chance confirmed my suspicions.  There's no use having all that pressure on the cylinders for a month.  That of course, meant removing the wheel covers, unhooking ... etc etc.  At long last (now I'm shivering from the cold) she was high and dry and I resembled a DEAD drowned rat.

Time for a treat!!  I know what you're thinking ... ice cream.  But no, it was something even better.  I'll show you my triumph tomorrow!!!  As for now, I'm gathering everything except the elusive Gator board and heading off to my water color painting class.  Can you believe it?  Me ... painting???