I knew there was a reason I took four years of French in high school.  In case you didn't, that says NO FRENCH PASTRIES.  Boooooooo!

At long last, water water everywhere!!  It doesn't seem to rain much in California any more, so yesterday Mother Nature decided to make up for it.  She turned on the hose and completely forgot about it, something like I would do.

It was freezing cold, dumping lots of snow in the mountains.  That was a sign.  So was the phone call I got that said no snow at the cooking school, but lots of coughing and sneezing.  That was enough for me.  I'll go another time.  I probably didn't need all those French pastries anyway.

The first order of business then became the Cooper Games.  An hour of Cooper rolls the ball to you and you roll it back landed me on the floor again.  At least this time I wasn't miserably full.  He has me SO well trained, that if he can't get the ball, he barks (rather loudly) so I will get it for him.

I tried to pass him off on my company who has returned, but alas, she doesn't speak Cooper's language.  I really thought when he got older, it would cease.  So far I've not earned the cigar.  In other words, I was wrong ..... again. 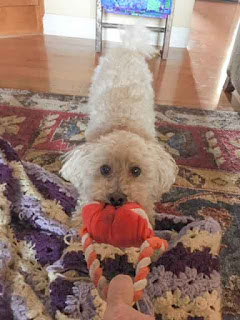 Just in case you see these in your store refrigerator case, they are AMAZING!  Honestly I've no idea how expensive they are.  I just grabbed a bag and ran.  Toss them in a frying pan with a little olive oil (or butter in my case) and let them cook.  Oh my goodness they are GOOD!!

I could probably cut up sweet potatoes myself into those small chunks a whole lot cheaper, but that trip to the hospital for a missing finger would probably cost more.  The best news ..... Cooper LOVES them.  Isn't that weird? He's definitely not Mikey and is persnickety as can be.  This may be temporary, but I'm running with it for now.  Don't tell him it's good for him. 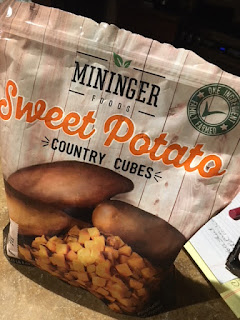 Although I needed to hit the grocery store, I procrastinated.  It was just too cold and ugly outside.  Instead, I continued to work on this lap-sized quilt that should have taken me no more than a few hours to complete.  I guess I'm not highly motivated. 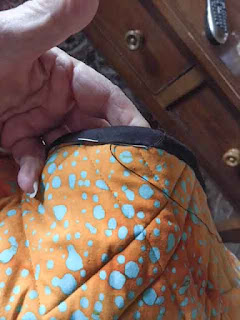 The cursed quilt is coming along.  What the heck was I thinking when I bought this?  Good grief ... it's awful, not to mention SO difficult to sew those ruffle squares.   At least I haven't stepped on any more pins, so the curse is held at bay. 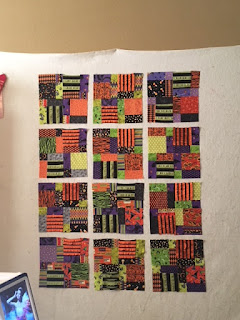 I've done my best to stay away from town and the crazy hoards of people shopping, but since I had to break into Cooper's turkey for my dinner (chopped up and kept in the freezer for HIS meals), I really MUST get to the store.  Maybe the all night rain storm will keep a few people at home.