To be honest, I have not one, but dozens of lists everywhere.  My lack of Christmas play memory as a kid has filtered over to old age.  If I don't write it down, I forget.  I keep three notepads on my coffee table, so while I'm watching those suspense-filled Hallmark Christmas movies, I can write down the thoughts that magically appear in my brain.

Many times a day, you will see me walking around double and triple checking those lists.  Especially when an RV rally is pending.  With nothing else exciting on the burner, I figured it was time to sanitize the RV drinking water tank.

First up, drain it.  That's the easy part.  Then I try to pour two cups of bleach into the fill hose on the left.  Sometimes it works, sometimes not.  On this lovely cold rainy occasion, the water in the hose would not come out allowing the bleach in.

I could hear it fill the hose, but couldn't stop fast enough to keep bleach from going everywhere.  I wiggled the hose back and forth, then tried again.  A little more went in.  Finally, with not even one cup in, I thrashed that hose like I was cracking a bullwhip!!  Hey ...... it worked!!!  I didn't get quite two cups in, but it was good enough in my book.

Over the next four hours I filled, dumped, filled, dumped again and finally filled it full.  I should have plenty of weight to keep me on the road in the predicted winds.  No worries about ice and snow.  If that happens, I'm staying HOME! 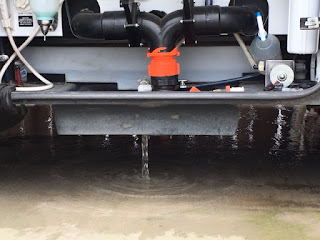 In between water dumps, I ran bleach water through all the faucets, whereupon I discovered most had no pressure.  I've got rather hard water here, so once in awhile I CLR the faucet gizmos.  It makes a world of difference.  For the same reason, I also do all the faucets in my house at the same time. 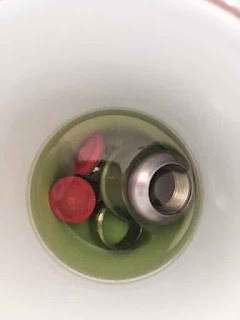 There's just something about the smell of CLR and bleach on your hands that keeps me away from the freezer and all those sweets I've collected.  It was a win-win!  Besides that, I was able to get quite a few things packed in the rig.  Every time I went out to check the water, I took a load with me.

I'm happy to say that since I played with the seals and leveled the rig, I haven't had any more water inside in spite of many rainy days.  Of course that doesn't keep me from having pans in place, just in case.

I spent the rest of the day baking another lovely quiche for Christmas morning.  Yes, it's that good!  Pioneer Woman's quiche ... you can find the recipe on-line.  I leave out the artichokes and sometimes put in spinach instead.

Here's my latest discovery.  Remember that frozen crust I raved about?  First Street is the brand, from Smart and Final.  Last time I tried Pillsbury, and honestly, it tasted terrible ... like rancid oil.  So THIS time I decided to taste test yet another frozen crust by Marie Callender.  Who doesn't love HER food?

It tasted okay and the outside crust was tender and flakey.  However, the bottom center never did brown like First Street.  It's a close second and good enough that NONE of this will hit my cemetery. 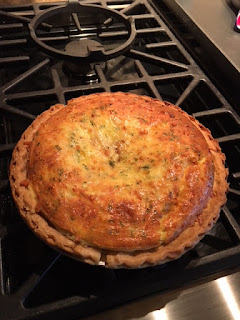 SO ... with the passing of the Winter Solstice (it's about time, I was getting tired of being in the dark) Christmas has arrived faster than the speed of light.  Where did the time go?

I'm wishing each and every one of you a Merry Christmas Eve.  I hope all your shopping is done and Santa brings you everything you want.  I asked for some WARM since it's 36 degrees this morning, making my house a lovely 62.  Brrrrrrr .........  Time to snuggle with the puppies in front of the fire and check my lists again.