Yes I know, California is in a drought.  Seems it's been that way for about 30 years.  MY take on the whole thing is that this used to be desert.  When this valley in California was first crossed by the pioneers, there was nothing but dirt and scrub brush, along with a jackrabbit or two.

WE made it totally green, requiring millions of gallons of water, by harnessing the water coming from the mountains.  We farmed every square inch, followed up by building a million houses right here in River City.  Then people wonder why we don't have enough water.  Duh .....

Well I can tell you, as of right now, we have MORE than enough.  It has rained continually for the last two days and will keep falling for seven of the next eight days.  I hope the weather guessers are wrong. 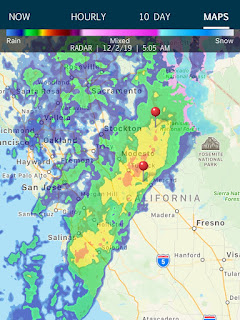 Why you ask?  Because I have the weirdest leak ever in my motorhome that defies reason.  I really have absolutely no idea HOW, but water is going underneath the edge and UP (yes up) a half inch lip, to meet up with a long metal strip UNDERNEATH the slide mechanism, then it runs down the UNDER side and finally drops off onto the carpeted floor.  It's impossible ... but that's what it's doing as far as I can tell.

The longer it rains, the worse it gets, in spite of my temporary fix of plastic covering that outside section of the slide.  At least the pans inside are now collecting the water.  Honestly, I've no clue.  THIS is where a Knight in Shining Armor would be VERY handy.

I will cry for you, my PG&E bill, because I've now got not one, but TWO heaters running day and night, drying out the damp carpet.

On a happier note, MY PAINTS ARRIVED!!!  These are just a few.  I've got twelve tubes ready to create something wonderful, if only in my head.  Like many things however, although I can do it perfectly in my head, what comes out of my fingers may be completely different. 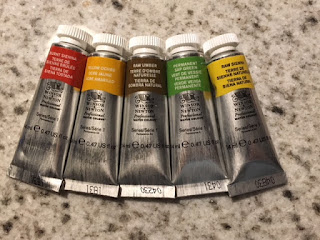 Here's my fancy dancy Nancy brushes, perfect for water colors.  As with most artsy things, I doubt I will use every one.  This cool case folds in half and stands up.  Now I'll have something to play with in my old age.  Maybe I'll get some coloring books to paint, just in case my creativity doesn't kick in. 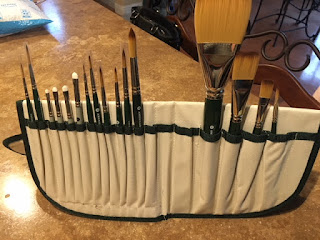 With nothing else going on due to the rain, I watched most every football game yesterday.  Yup, I sat my butt on the couch almost the ENTIRE day.  Did anyone see that Ravens-49ers game?  BEST game of the CENTURY.  It was Super Bowl worthy!!

I was screaming for the Ravens!  I know, the 49ers SHOULD be my team, but they lost me when they decided it wasn't important for everyone to stand for the amazing red white and blue.

Time to head back out with umbrella, parka, my long-john underwear and my rain boots to check the rig.  I guess I'll be spending my retirement money on an RV cover.