Not Your Typical Christmas Play

I'm sure everyone has been to their children's or grandchildren's Christmas plays, whether at school or at church.  Not having kids or grands, I have not, although I remember them clearly from MY past.  There was nothing worse than getting up there and trying to remember all the words.

I may have mentioned before that our church met at the Arthur Murray Dance Studio in town.  Boy that dates me!!  Before long, enough money had been accumulated to buy a large piece of property and begin building.

My dad was one of the major builders of the Methodist church.  Us kids just got in the way by crawling through all the underground pipes, getting stuck and requiring extraction.  Talk about getting in trouble!  I STILL remember THAT spanking and the ensuing claustrophobia that has never left me.

My acting career ended quickly after completely forgetting my ONE line in the church play.  "I just got my hair dyed ... what do you think?"  The ladies at the table finally said the line for me.  It was stage fright at it's best.

So when I was invited to this Christmas play with all the kids, I had to go and cheer them on.  They began with a couple of Christmas songs before beginning the story of an adoption.  Gosh ... that's different, just like they said it would be.

In between each of eight scenes, they all jumped up on stage and sang at least two songs.  Let me tell you they sang at the top of their lungs and screamed those accent words so loud the lady in the audience next to me jumped!! 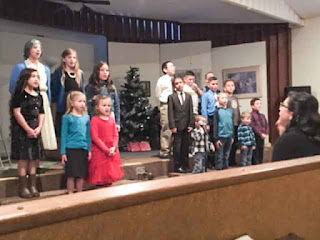 So here's the story.  Brad was sent from an orphanage to stay with the Baileys over Christmas.  He hated everyone and everything.  Mr. Bailey wanted to adopt him.  Mrs. Bailey didn't really want FIVE kids to raise, but having been adopted herself, she finally relented.  There was a big snowball fight and LOTS more singing before they all lived happily ever after.

In case you were wondering, the two little boys at the right didn't sing a word, but they got up there every single time and stood in line until the break when they sat down.  Too darn cute!!  We clapped between every act of the play and after every song.  You should have seen the smiles on the kids.  Amazingly, they didn't forget not one single line, unlike me!!

Afterwards, they made up a reception line and every person attending shook hands with every single budding actor and actress.  Honestly, I don't know how they remembered their lines, let along the words to the twelve songs they sang, only three of which were ones you often hear.

Miss Stephanie (the pastor's wife) on the far right did an amazing job, even if she was pulling her hair out by the handful the day before.  Just in case you were wondering, the quick five minute sermon after was about how we were all adopted by Jesus.

So there you have it ... the best children's play I've been to.  There was even milk and cookies for everyone.  I'm still smiling thinking about all the songs those kids sang and how well they performed.

By the way, the Pastor and his wife have five kids of their own, several born in the Ukraine where you have to take all your own bedding, medicines and care items with you when you deliver your baby.  They have nothing in their hospital but a metal bed.  Interesting, yeah??

Posted by Nancy Kissack at 5:18 AM