Having been born and raised on a cattle ranch in the high desert, I'm pretty familiar with everything beef.  I know I've told this story before, but any time one passed over the rainbow (for whatever reason), everything came to a screeching halt as we proceeded to save those dollars, at that time maybe $130 in the entire cow.

Everything was wrapped and placed directly in the freezer.  On rare occasions, the beef was transported to the local butcher shop to be hung and aged to perfection.  Aging tenderizes the meat.  There's a fine line between tenderized and ewwww I'm not eating THAT! 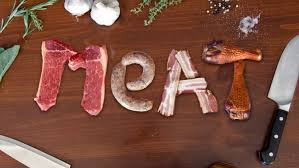 Aged beef is what you get at Chris Ruths, or better yet, Gallaghers in New York City.  The higher the price, the better the steak, meaning it's been aged much longer and has lots of fat called marbling.

So here's where your cuts of meat come from.  Personally, I don't eat anything north of the neck.  Brisket was always the cheapest piece of meat, followed closely by flank steak.  Nowadays it runs with the big boys closer to sirloin.  I've no idea why, because it's still a tough piece of meat. 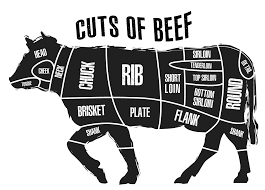 Lately, EVERYTHING I've gotten at the grocery store (Save Mart in my neck of the woods) has been tough.  Not only that, but it has the flavor of the sole of my boots after walking all day in the back pasture.  I finally decided to ask why.

In the days of old when things were much simpler, meat was classified as Prime or Choice.  Prime, like this T-bone, having lots of marbling giving it more flavor and tenderness.  Choice was everything that did not make the prime grade.

The USDA "grades" every carcass for your eating pleasure.  To be honest, prime meat was that which stood in the feed lot for months at a time eating grain.  Choice came right off the pasture, what I call GREEN meat.

It seems to me I've been getting a lot of "green" meat lately, so I stopped in at the meat counter to ask the question .... just what grade of meat do you sell here?  He looked at me kind of funny.  "Born on a cattle ranch" I stated.  I repeated the question. 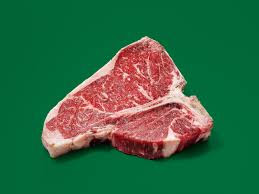 The very expensive stuff in the glass case (not wrapped) is PRIME.  I never buy it because it's too expensive.  What about the rest that you sell in your very long meat case?  That's SELECT he said.  Wait .... WHAT?  That's worse than choice!!

So here's the nitty gritty.  Meat is now graded as prime, choice, select, standard, commercial and you-don't-want-to-know.  All this time the meat I've been buying isn't even CHOICE .... it's SELECT or OMG STANDARD!!   No wonder it's tough and tasteless!!  Okay then ..... I purchased a pound of prime hamburger for $5.99.

So there you have it .... all that meat you've been buying at the store and paying anywhere from $4.00 to $8.00 a pound probably hasn't been aged at all, nor has it come from the grain-fed feedlot.  No wonder it has no flavor.  It's the THIRD or FOURTH rung on the ladder.

So what do you think you are getting when it's on sale for $1.99 a pound?????   Yeah, that's what I thought too.  It may be expensive and I may have to make three meals out of that steak, but from now on, I'm buying the prime meat.  Even better if it's on sale.

The answer to the age old question "where's the beef?" is IT'S THE MOST EXPENSIVE STUFF IN THE GLASS MEAT COUNTER.